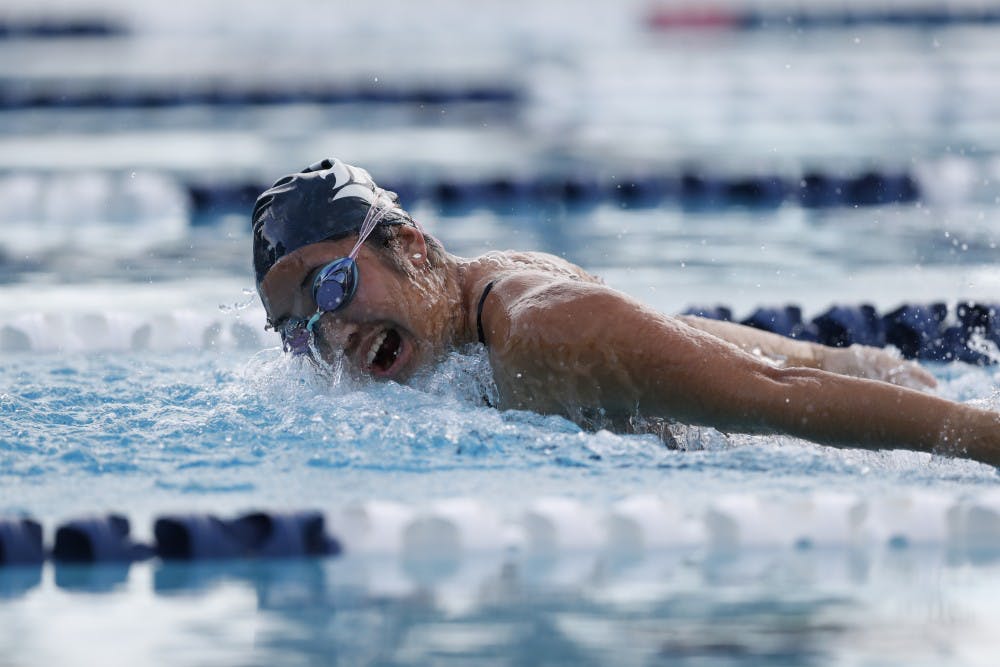 At the crack of dawn, set foot on campus and you might see someone speed past you, hurriedly biking toward the Gibbs Recreation and Wellness Center. That person might be none other than junior swimmer Brittany Bui.

Bui is on the Rice swim team and specializes in the butterfly and individual medley events. During the Rice Invitational two weekends ago, Bui finished first in the 100-yard butterfly and 100-yard IM and third in the 200-yard butterfly. For her performance, Bui garnered the title of Conference USA’s Swimmer of the Week. But Bui said that she is more interested in overall team success rather than individual accolades.

“[The award was] really no big deal,” Bui said. “I just wanted to do the best I could for my team.”

Bui said she began swimming at age 7, but only after trying several other sports.

“I did every sport: soccer, gymnastics, tennis,” Bui said.  “I was awful at all of them, so my parents’ last resort for me to stay active was swimming and I ended up being actually good at it.”

Bui stuck with the sport and improved. Around the end of her junior year of high school, Bui said, she realized her potential for swimming at the collegiate level when she began receiving offers from several colleges. According to Bui, it was only after speaking with coaches, going on recruiting trips and carefully weighing her options that she made her decision to attend Rice.

Bui said she credits her decision to the impressive balance between education and athletics the school fosters. Bui said she didn’t know much about Rice in high school, but accounts from a swim team friend who attended Rice got her interested.

“I would catch up with [the friend] when she came back over the holidays and she would tell us how amazing Rice was and how she loved the swim program here,” she said.

According to Bui, the team dynamic in collegiate swimming is very different from middle school or high school swimming programs.

“In middle and high school, we used to swim for ourselves, to compete and get the fastest times,” Bui said. “In college, that mindset changes. You are not swimming for yourself, you are swimming for the team.”

Bui said there are several lessons from her experiences with swimming that have transferred to her everyday life, the most important being time management. As a mechanical engineering student, Bui said she not only has to attend two swim practices a day but also must get through her heavy coursework.

Bui said that being on the swim team has led her to develop a tight schedule that packs in homework, practice and classes, along with time for catching up with friends at her residential college and pursuing hobbies such as cooking and baking.

“It can be really challenging to maintain [a work-life balance] sometimes but I enjoy it,” Bui said.

Just 2.1 percent of NCAA student-athletes are Asian American, according to a report published in December 2018. Bui said said she didn’t realize that she was a minority in sports as a child, but it became obvious at the collegiate level. Regardless, she said Asian American youths involved in athletics should follow their passions.

“As long as you are passionate about what you are doing, don’t let your environment affect your choices or keep you from doing what you like to do,” Bui said.

So far this season, the swim team is undefeated and Bui said she looks forward to helping the team continue to improve.

“I am really excited to see what our team can do and how much better we can get from last year,” Bui said. “Each year we are learning and improving not just our [swimming] times but also how to be a cohesive team.”

Bui said that graduating from Rice will mark the end of her competitive swimming career. According to Bui, once she graduates, she hopes to enter the workforce. Until then, Bui said she hopes to continue having fun while helping her team succeed.