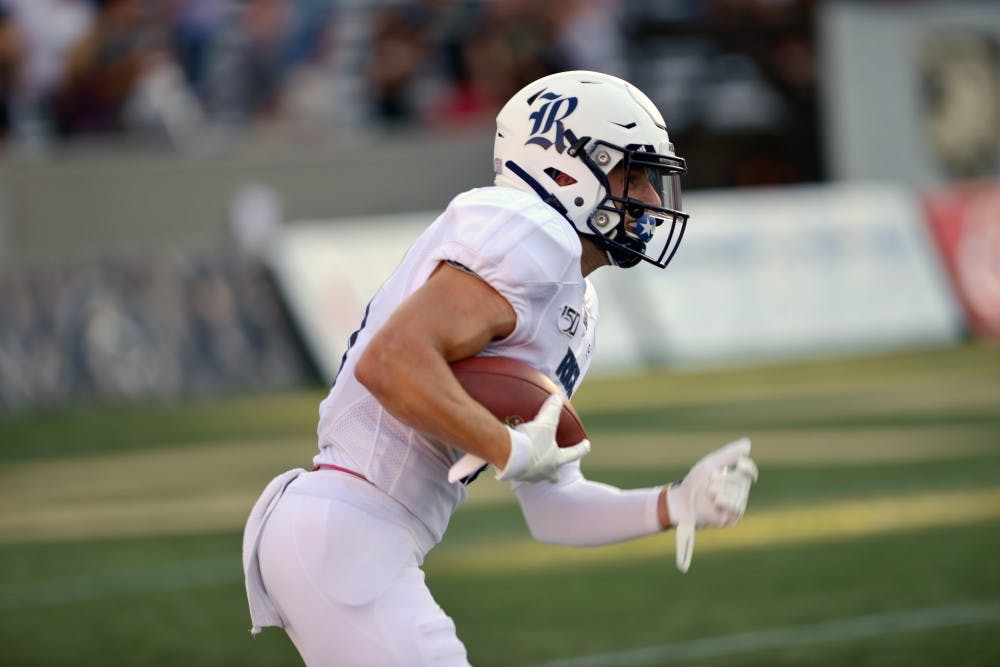 The 5-foot-10-inch, 185-pound player you see receiving footballs on kickoffs and running full speed into opposing players for the Rice football team is none other than junior wide receiver Austin Trammell. Though he may be smaller in stature than most football players, Trammell has been a kick punt returner for the Owls since his freshman year. But Trammell’s talent isn’t just limited to special teams. Last year, Trammell was also the team leader in receptions and receiving yards. After Trammell’s on-the-field performance during his sophomore year, he was named team captain this season.

Versatility is a theme that Trammell has not only embraced on the football field, but also  demonstrated during his multifaceted athletic career in high school. As a baseball player in high school, he gained recognition by being named the 2016 15-6A Newcomer of the Year after hitting .543. Trammell said that for a while, he wasn’t sure which sport he would play at the collegiate level.

“The summer before my junior year [of high school], I had to kind of choose if I wanted to play college football or college baseball, which was really hard,” Trammell said. “It took me a couple months to figure it out, but I ended up going with football because I just love football more.”

Trammell’s love for football was ingrained in him during his youth. According to Trammell, he began playing flag football at a very young age and started playing tackle football in third grade.

“I began playing football as soon as I was born and I guess I realized sophomore or junior year of high school that I was good enough to play at the Division I level,” Trammell said.

During Trammell’s freshman season, he garnered All-Conference USA honors as a kick returner despite Rice winning only one game. That year, Trammell averaged 7.8 yards per punt return, which was the highest mark for a Rice football player since 2011.

“It’s kind of better if you don’t think and just go,” Trammell said. “I’m trying not to get killed.”

While Trammell defined himself as a kick and punt returner his freshman year, he stepped up to the role as Rice’s most prolific receiver on the team the following season. He went from having only four catches his freshman year to catching 62 balls his sophomore year. As a result of his improved play, Trammell was awarded the 2018 George R. Brown Offensive Award as Rice’s top receiver. This year, Trammell has continued where he left off, leading the team with 18 receptions and tallying 231 receiving yards through the season’s first four games.

Whenever he is off the football field or not in the classroom, Trammell, a sport management major, said he likes to relax.

“I like to watch Netflix and hang out with my girlfriend,” Trammell said. “Out of season, I play a lot of golf.”

While the team captain has to be a serious leader for the rest of the football team, Trammell said that there is another side to him that people don’t often see.

“I like to goof around a lot more than people would think,” Trammell said. “I feel like most people view me as pretty serious just because I am normally pretty locked in.”

Trammell will have to maintain the serious attitude to go even further in football. After Rice, Trammell said he hopes to continue playing competitive football.

“It’s always been a dream [of mine] to play in the NFL growing up,” Trammell said. “It definitely is a goal for anyone playing college football.”

Rice football fans can watch Trammell continue to pursue his dreams of playing in the NFL Sept. 28 at 6 p.m., when Rice faces off against Louisiana Tech University.