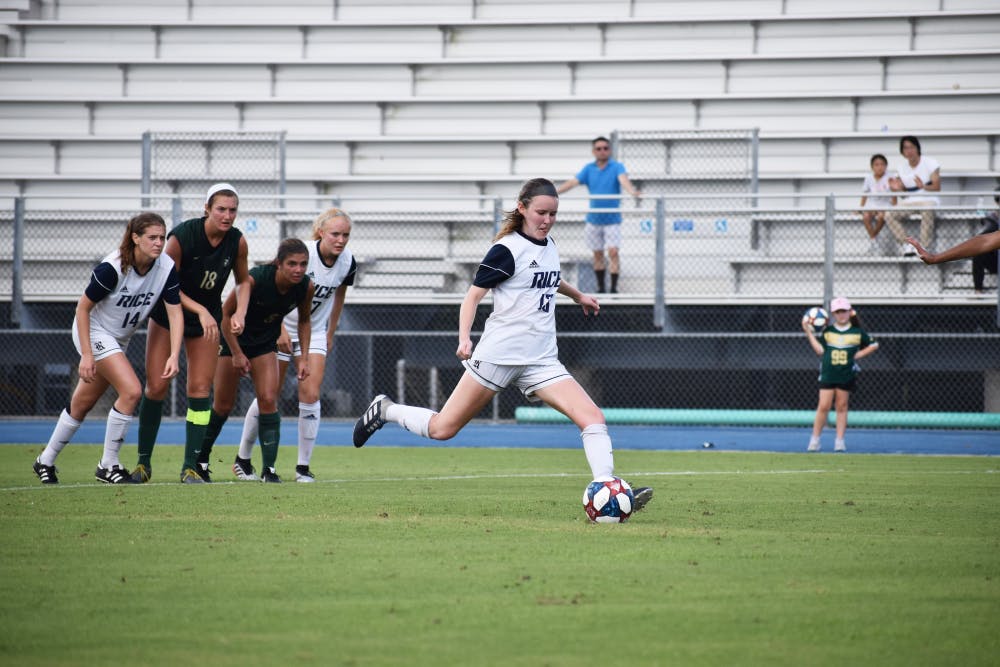 Rice soccer edged its way past the University of North Carolina, Charlotte 49ers with a successful penalty kick to give the Owls a 1-0 win this Sunday afternoon in their Conference USA opener.

The match was hosted at Rice’s Holloway Field. Following the victory, the Owls’ record is even at four wins and four losses.

According to head coach Brian Lee, Rice came into the game knowing it would not be an easy win.

“Charlotte’s going to be right there at the end of the season competing to win the conference championship,” Lee said. “We knew that coming in ... that it would be a big, big challenge.”

Rice felt that challenge from the time the whistle blew to begin the first half. Early in the game, Charlotte’s high energy put pressure on the Owls’ defense. In the 14th minute of play, the 49ers ran the ball up the left side of the field and took a shot from outside the box, which went over sophomore goalkeeper Bella Killgore’s outstretched arm to rattle the crossbar. In the 18th minute of play, Charlotte hit the crossbar again following a corner kick.

Quick, fluid passing and long balls up the field allowed for the 49ers to out-shoot Rice nine shots to one by the 21st minute of regulation. By the end of the half, Charlotte had put 11 shots up on the Owls defense, who has allowed just 14 shot attempts per game this season.

A joint effort by Rice’s defensive back line and Killgore — who tallied a season-high six saves — kept the score 0-0 at halftime. However, the Owls’ lack of consistent passing and possession upfield resulted in only two shots for Rice during the first half.

Lee said he made an offensive adjustment at halftime to create more attacking opportunities for Rice.

“We made a subtle little adjustment to our midfield shape because Charlotte was really the better team for [those] 45 minutes in the first half,” Lee said. “It wasn’t an effort problem ... It was the structure of how we were set up versus how they were set up.”

Even though Charlotte’s pressure remained high in the second half, Rice’s offense picked up the pace, with the first shot of the half coming from Rice midfielder Lianne Mananquil.

With Rice’s new structure in the midfield, both offenses were creating scoring opportunities: By the 54th minute of play, both teams had an equal number of shots.

But in the next 10 minutes, Charlotte began to control the flow of the game. Charlotte outnumbered Rice’s shots six to two, the Owls had racked up five fouls in the half and junior center back Trinity King was carried off the field with an injury.

With seven minutes left in regulation, the scoreboard still read 0-0. Both Rice and Charlotte were exchanging attacks with no result. However, in the 84th minute, Rice was awarded a penalty kick following a Charlotte handball in the box. The handball occurred after sophomore midfielder Delaney Schultz tangled with a Charlotte defender as she received the ball and chipped it over the defensive line.

“I flicked it over the [Charlotte defender’s] head, and I thought she fouled me so I was on the ground,” Schultz said. “I didn’t really see what happened after that, but I think she thought — the ref said play on — and she thought the ref called a foul so she picked it up in the box.”

Following the handball, Schultz stepped up in front of the goal, took a few steps back and fired the ball into the left side of the net. The goal was Schultz’s first penalty kick during her time at Rice and her second goal of the season.

Despite Charlotte’s continued efforts to find the back of the net, Rice held on for the 1-0 win, putting them in a six-way tie for first place in C-USA.