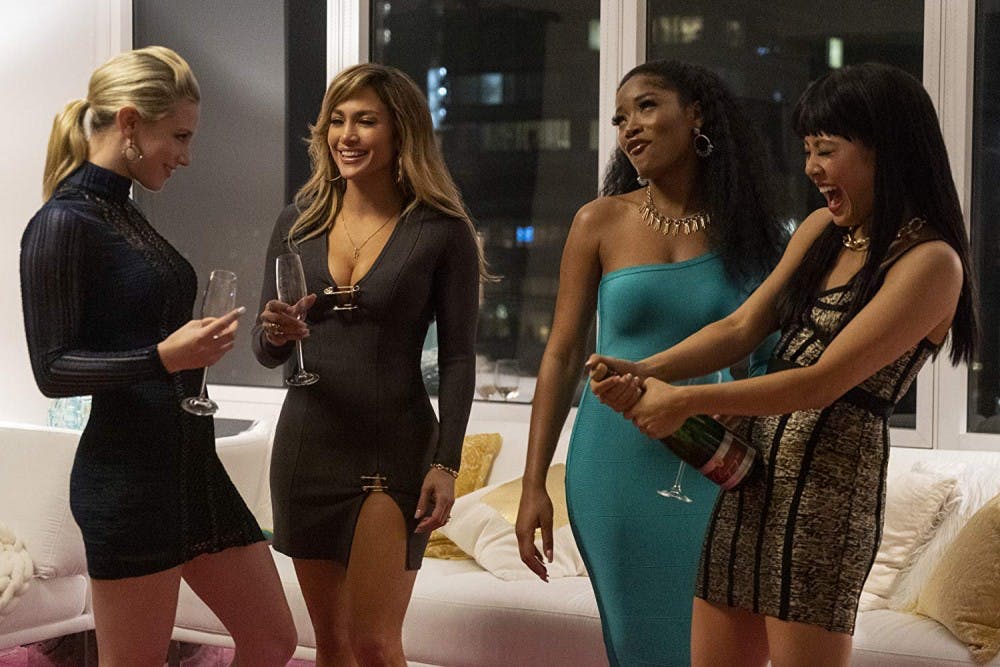 “Climb into my fur,” Ramona says to Destiny with a flip of her coat. They are on top of the rooftop of the Manhattan strip club they work. At this moment, Ramona (Jennifer Lopez) answers Destiny’s (Constance Wu) request for guidance and takes her under her proverbial wing.

This moment encapsulates “Hustlers” — its electricity, wow-ness, sisterhood and camaraderie.

At its best, “Hustlers” is a fun Robin Hood-esque caper with all of the stick-it-to-the-man soundbites, well-timed comedic beats and edgy girl-power trimmings — two women yanking the suit-tie of Wall Street to get their slice of the American pie. At its worst, “Hustlers” is a loosely framed story of the rise and fall of friendship to greed and the demands of motherhood.

By consulting with Jacqueline Frances, an author who writes about the realities of dancing industry, and combing through the transcripts and notes of Pressler, Scafaria succeeds in allowing “Hustlers” to delicately depict the sister-like relationship between dancers, the degrading, entitled behavior of their clients and the exploitation of club management. A feminine touch is obvious in how the camera angles do not pander to the male gaze and how nudity is not excessive, given the environment it depicts.

Several reviews highlight how current and former dancers including Cardi B have been brought to tears by its representation of their experiences. “Hustlers” has received a lot of praise, but also a lot of criticism regarding the juxtaposition of social media buzz surrounding the film and the lack of support and awareness towards real issues — such as career-damaging social media censorship known as shadow banning — facing dancers and sex workers in the complex Trump era and #MeToo movement.

Another point of criticism is how the film may possibly conflate criminal activity with the work lives of dancers. This seems to be a conclusion reached by people who weren’t paying close enough attention to one of the underlying messages of the movie. “The whole country is a strip club,” Ramona states. “You have people tossing the money and people doing the dance.”

The film doesn’t glamorize dancing. “Hustlers” only depicts the temptations and pitfalls of using the cards you’ve been dealt to win at all costs.

“Hustlers” dips its toes in many areas — Wall Street corruption, rigged capitalism, privilege, immigration, the cycle of poverty and unemployment, family trifles, and bad boyfriends. The film’s wide lens is focused by the attention given to the blossoming of Ramona and Destiny’s friendship. Concentration on this important central plot line, however, unfortunately wanes towards the film's climax just when Lopez and Wu’s jaw-dropping acting is most needed to smooth the films’ rushed ending.

“Hustlers” has a banging, well-curated soundtrack, with Janet Jackson, Britney Spears, Sean Kingston and a bit of Chopin sprinkled here and there. Though, there is an identity crisis in the film’s tone and angle underlying even its music selection.

It is unclear whether it should be a period piece, fun dramatization or serious avant-garde take on the lives of dancers driven to crime to achieve financial stability. The heart of this conflict rests in the stigmas, stereotypes and Hollywood tropes that “Hustlers” has to navigate in order to respectfully tackle its source material but also remain entertaining and palatable enough for the conventional rated R moviegoer to be profitable.