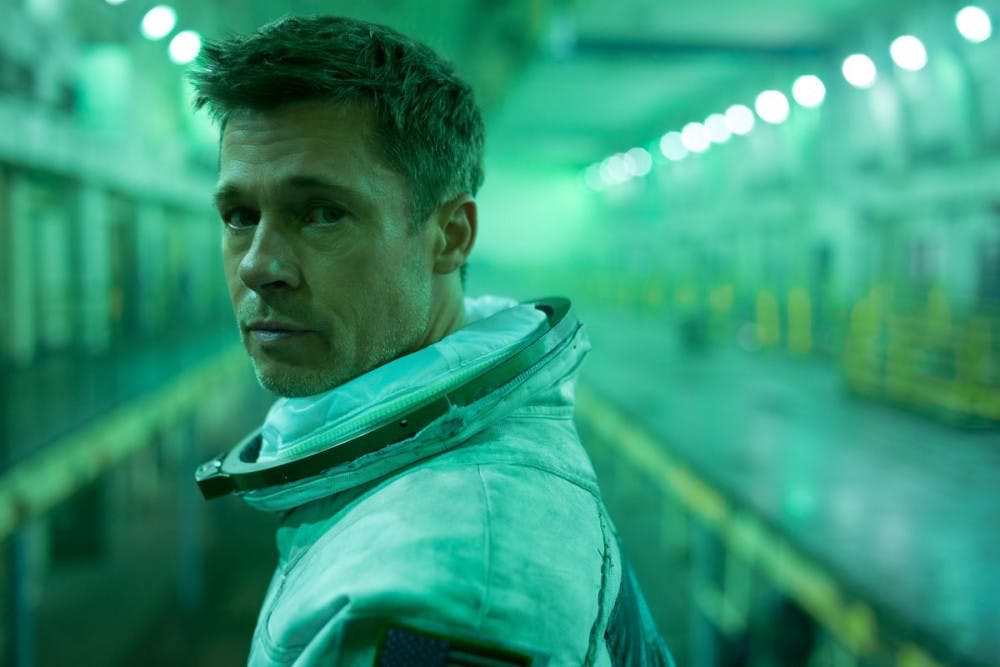 Acclaimed director James Gray has taken his big shot at the storied space genre with “Ad Astra,” an expansive, impeccably produced movie that sadly does not achieve the equilibrium between internal character study and sci-fi epic that it attempts to reach.

The story takes place in the near future and follows Roy McBride (Brad Pitt), an experienced astronaut known for his ability to remain calm in perilous situations. After a series of power surges threatens Earth’s safety, McBride must journey into space to contact the likely source: his long-lost father.

Pitt carries the movie entirely on his shoulders in a demanding role that requires him to be the focus of almost every shot in the film. Pitt essentially has to give two separate performances: the reserved, stoic on-screen version of McBride and the emotionally transparent version that we hear in the film’s ethereal voiceover. Somehow, Pitt manages to walk the line between them, and the most beautiful moments in the film come when he is allowed to intertwine the two.

Other than Pitt’s performance, the film’s strongest quality is its overall production elements. Every frame from cinematographer Hoyte van Hoytema is gorgeous, combining soft lighting with a diverse color palette to create painterly images. Of course, being a sci-fi film mostly set in space, these scenes would seem cheap if the visual effects were not up to par. Thankfully, the visual effects are fantastic, seamlessly drawing viewers into otherworldly environments The set design also aids in upholding this suspension of disbelief, making the film’s vision of the future an envisionable reality.

Where the movie falters is in the execution of its plot. The pacing is inconsistent, oftentimes moving methodically with erratic moments of energy and high-intensity action. If the film had either maintained a meditative plot progression throughout or added more action sequences, the pacing might have felt more balanced.

Another component of the lackluster plot execution is the previously mentioned voiceover by Pitt. While it could be said that it adds a dreamlike quality to the proceedings, it is more often than not simply a lazy means of thematic exposition. The film relies heavily upon Pitt’s narration to engage the viewer when it would have been arguably more effective to allow the on-screen events to speak for themselves.

Additionally, the film fails to make its supporting characters compelling. Brief turns by great performers like Donald Sutherland and Ruth Negga feel pointless rather than meaningful. The one supporting performer that doesn’t get short shrift is Tommy Lee Jones as McBride’s father, whose tired desperation is captivating whenever he intermittently appears in the film.

Further noteworthy aspects of the film include its beautiful score by Max Richter, which supplies a fittingly melancholic mood to the movie and the deft direction of the action sequences. Though these scenes feel jarring when viewed within the context of the entire film, they are absolutely gripping in isolation.