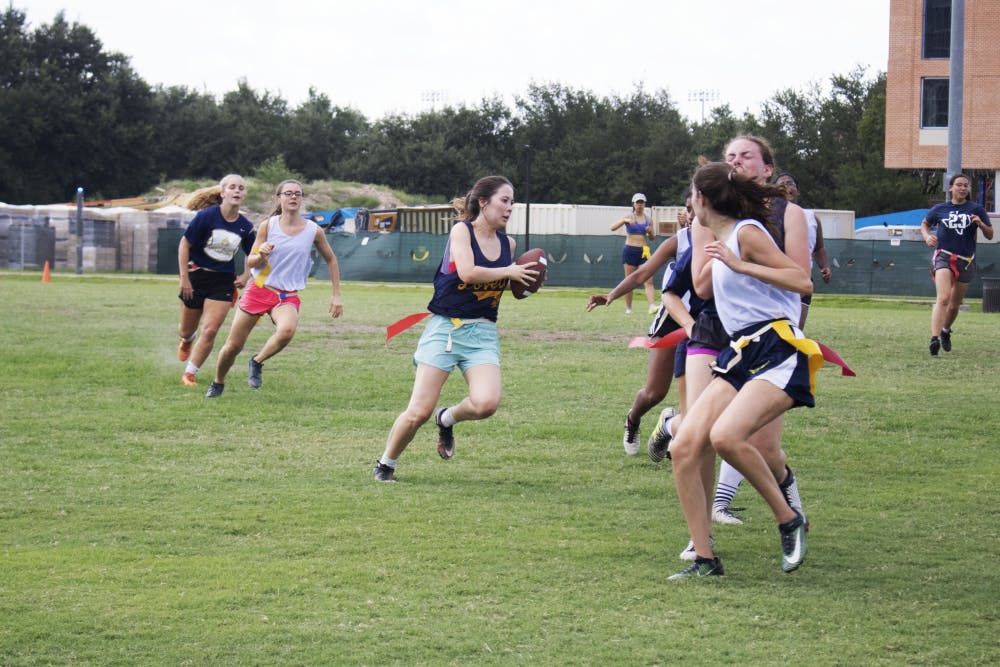 According to current women’s flag coordinator Sarah Rosenthal, a Lovett College senior, the Graduate Student Association will not compete in women’s flag, also known as powderpuff, this season.

“GSA has emailed us that they will not be fielding a women’s flag team this season but hope to do so next year,” Rosenthal said. “We are still discussing how to best handle this new information moving forward.”

“We were looking forward to having a game with new [referees],” Coleman, a senior, said. “But I guess we’ll have to do that next week. [GSA was] still scheduled so we decided we would come out and practice beforehand in case they did come.”

The powderpuff coordinators emphasized to the new referees that they must strictly enforce penalties designed to prevent dangerous contact, according to Robeson.

“There is more focus on illegal contact and personal fouls than before, especially on the line with rushers and blockers,” Robeson said.

Martel College captain Jackie Richards said that escalated enforcement of the rules is personally important to her after she broke her finger during a powderpuff game her sophomore year.

“It sucks because when there are teams who are playing aggressive, there is a high chance of injury, especially if you are a rusher — you are sticking your hands actively toward a running person — so there is a lot of chance for finger injuries,” Richards, a senior, said. “I do feel like the refs have gotten a lot stricter in terms of aggressiveness.”

“There have been a lot of injuries, last year we had a few concussions,” Miller, a senior, said. “But with the blocking, there should also be competitive aggression, [but] nothing too crazy.”

McMurtry captain Miranda Lee said she hopes the referees will maintain a quick pace of play.

“I think a lot of times, at least for us as players, it can be frustrating when the game is stopped so often,” Lee, a senior, said. “It’s really hard to find that balance [among] safety and competitiveness and quick gameplay.”

Not only did last year’s powderpuff coordinators struggle to alleviate injuries, they were also forced to reschedule numerous games due to inclement weather conditions, according to Sarah Mozden, a Sid Richardson College sophomore.

“It was a little frustrating last year,” Mozden said. “Almost all of our games got rescheduled due to rain and weather. A lot of it we recognize is out of our control, but a lot of our practices also got canceled or had to be done indoors. You really can’t have an effective practice with all of these girls when you are inside of a gym.”

But Mozden said she is confident in this year’s powderpuff coordinators.

“I think our coordinators for powderpuff this year are really good, and I also really like the reffing staff this year” Mozden said. “I  think it’s going to be a really good season for everyone.”

A weekend has been reserved late in the season to prepare for the possibility that games need to be rescheduled, according to Rosenthal.

“I think in general, the North colleges have a harder division than the South colleges,” Richards said. “There are good teams in the South, but overall, there are always some teams that are not as competitive. But every North college I think is competitive, minus Brown.”

“We respectfully disagree that the North is better than the South,” Coleman and Kantorczyk said. “It’s hard to tell how the season’s going to go. But we’re really excited about it. We are just trying to stay focused on us and doing as well as we can each game.”