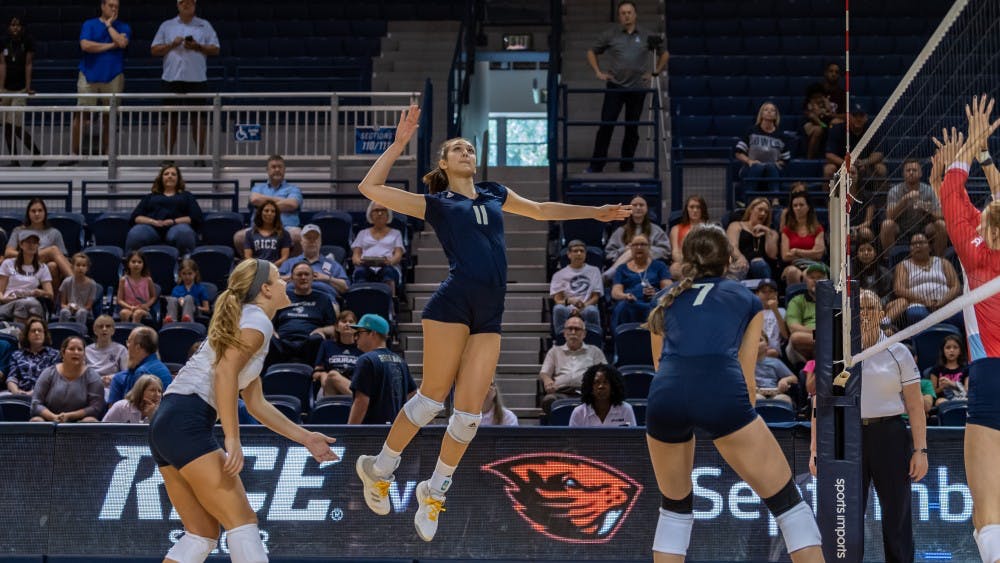 For her groundbreaking play during the first four weeks of the season, junior outside hitter Nicole Lennon has been named Conference USA Offensive Player of the Week four times. No other player in Rice history has earned that award four times in an entire season. According to Lennon, staking her claim in Owls history creates an evolving challenge.

“I have been very fortunate to have earned accolades throughout my volleyball career in recognition of the hard work I’ve put in during both practice and competition,” Lennon said. “To know that my constant training is paying off ... makes me feel really happy and appreciated. Overall, though, the best thing about earning awards for my performance is that they motivate me to beat my own personal best.”

Last season, Lennon earned C-USA Player of the Year. Lennon entered this year ranked No. 3 in Rice history in kills per set (3.76), but she is on pace to climb the Owls’ leaderboard. Lennon ranks No. 8 nationally in kills per set (5.12) after Rice’s 11-1 start to the season, and has helped the Owls to their first top-25 ranking (No. 22 in the American Volleyball Coaches Association poll) in team history.

Lennon said her athleticism provides an advantage when she attempts to kill the ball.

“The words I would use to describe my play style are fast, athletic and emotional,” Lennon said. “Something that gives me, and my teammates, an edge over our competitors is our ‘fast arms,’ which means we follow through on our swings so fast that the opposing team has trouble defending them.”

When it comes to challenging her opponents on the court, Lennon said adrenaline fuels her game.

“Something that I think separates me from a lot of volleyball players is the emotional aspect of my play style,” Lennon said. “Each play of the game affects my emotions a lot … I am able to use my anger, excitement, sadness, joy and pride all to my advantage. Channeling my emotions into every play makes it really easy for me to get pumped up, and to pump up my teammates in the process.”

Off the court, Lennon said she sometimes struggles to balance academics with athletics, due to Rice’s rigorous practice and game schedule.

“I think what a lot of non-athlete students don’t know is actually how much commitment our sport requires,” Lennon said. “We usually have at least two hours of practice a day, and that is not including at least two more hours of treatments, lifting, film-watching and more. During season, we are on the road four days or more of every two weeks. I have no time to squeeze in any extracurriculars, if I want to sleep.”

Lennon is currently pursuing a double major in economics and psychology, and said she aspires to earn a doctorate in clinical psychology.

“I have never wanted to be a professional volleyball player,” Lennon said. “While I really love the sport, I think my calling in life is to help people. I plan to … become a clinical psychologist so I can help make people happier.”

According to Lennon, good study habits are helpful both on and off the court.

“I look a lot at statistics, because I’m a nerd like that, so I am always trying to improve my kills per set, digs per set, aces, blocks and more,” Lennon said. “Overall, I want to achieve these things so I can make things easier for my team to achieve our goals as a whole, like winning [C-USA].”

As she moves into the last half of her career as an Owl, Lennon said she appreciates her classmates’ support.

“Even though I don’t have a lot of time to socialize on campus, it is reassuring to me to know that I have people at Rice and in my college — Baker Comes First! —  to help me out if I need it,” Lennon said. “I am very fortunate to go to a school with such supportive people, especially when those supportive people show up at our games.”