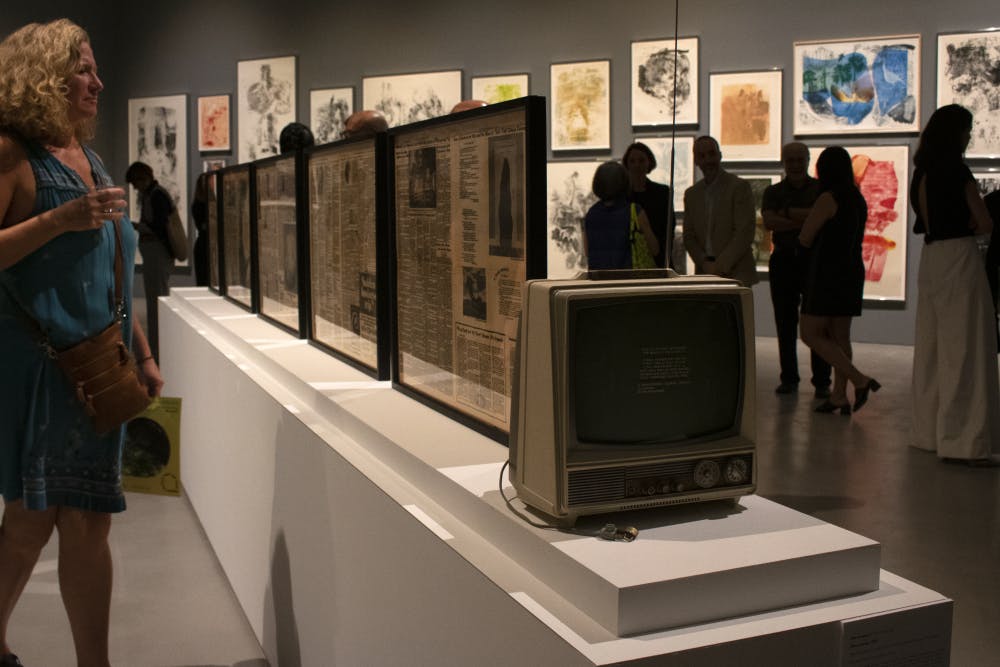 Friday’s classes may have been belatedly canceled, but not even Tropical Depression Imelda could halt the launching of the Moody Center for the Arts’ latest exhibit: “Moon Shot.” Despite torrential downpour, the opening reception turned out a sizable crowd of visitors eager to partake in the Moody Center’s celebration of the 50th anniversary of the historic Apollo 11 moon landing.

This show is, however, by no means Rice University’s first contact with the moon. Houston’s nickname, Space City, exists in large part thanks to our university’s formative collaborations with NASA. “Moon Shot” greets visitors with a nod to Rice’s unique legacy by displaying an excerpt from John F. Kennedy’s stirring 1962 Rice Stadium speech. Here, the late president lauds Rice University, Houston and Texas in the same breath with his bold declaration. “No nation which expects to be the leader of other nations can expect to stay behind in the race for space.”

According to Alison Weaver, the Moody Center not only asserts Rice’s role within this historical context, but that of the arts as well.

“We hope to add artists to the list of experts, and to complement these citywide events [that commemorate the moon landing anniversary] by exploring the impact of the moon landing on the visual and performing arts,” Weaver, executive director of the Moody Center, said.

“Moon Shot” begins by framing the moon landing with a familiar historical slant.

A dominant narrative entrenched in the collective cultural imagination, this version of the moon landing is at best an idealistic expression of manifest destiny and technological prowess. At worst, it reflects an insatiable American imperialism and romanticized nationalism. The Moody Center does not hover here for long, however. What could have easily remained a predictable expression of “progress” and NASA idolatry takes off in different, compelling directions. Deliberate curatorial decisions shift the exhibition’s focus to include truly varying perspectives and visual iterations of the moon’s allure.

“As a source of creative inspiration, the moon landing affected artists of all backgrounds, and the exhibition seeks to reflect that,” Weaver said.

The most striking example of this can be found in the exhibit’s second gallery, where, from the outset, visitors are confronted with lyrics from Gil Scott-Heron’s 1970 song “Whitey on the Moon.” Suddenly, celebration becomes accusation, as the song represents oft-ignored opposition to space exploration. Though it reads as a poem and is treated as a work in its own right, Heron’s scathing words arguably function as the curatorial intervention that informs readers’ assessment of the art. If one begins their trajectory with this piece — I highly recommend doing so — the cynicism expressed becomes a useful lens through which to complicate the rest of the show. The details in Robert Rauschenberg’s awe-inspiring lithographic series, for example, can then be parsed through more critically. Visitors’ eyes may be more keen to recognize the latent trepidation in Rauschenberg’s distortion of and connection between images of space and war.

Interestingly, the Moody Center offers no overarching, introductory text in this second, most populated space. Visitors are afforded an unusual degree of liberty and trust, allowing for multiple readings such as these to flourish.

Importantly, the art historical icons featured in “Moon Shot,” namely Rauschenberg and Andy Warhol, are not granted primacy over their counterparts. Though no less interesting, their particular sensibilities have been canonically exhausted; the Moody Center’s successful and thorough incorporation of their voices amid a universe of other dialoguing artists is particularly admirable. Despite not being name-dropped in promotional text, all the artists featured in “Moon Shot” carry their own weight.

One such artist is Katy Schimert, whose work explores lunar meaning-making from a gendered perspective. Interested in diverting from masculine narratives of exploit, Schimert addresses the topic more intimately, considering the moon’s influences on the female experience. She spoke briefly at Friday’s public opening, reflecting on the moon’s symbolic parallels with women’s power (and lack thereof) in history.

“The thing about being in a position that is not dominant, but reflective, is that you have ways of answering through humor while being a little bit insidious,” Schimert said.

Overall, “Moon Shot” features many women, again proving that an art institution has much to gain — specifically the reward of producing a nuanced, quality show — from conscientious curation.

It is telling that a self-professed space hater has run out of room in her praise of “Moon Shot.” Several opportunities to engage with virtual reality, spectacular use of color (from both artists and curators) and even a tasteful touch of poetry — there’s no way to fit it all in! What’s clear is that “Moon Shot” has brought the Moody Center one giant step closer to becoming a leading player in the Houston arts scene.

“Moon Shot” will be on display at the Moody Center until Dec. 21. The Moody Center is open 10 a.m. - 5 p.m. Tuesday - Saturday and admission is always free.