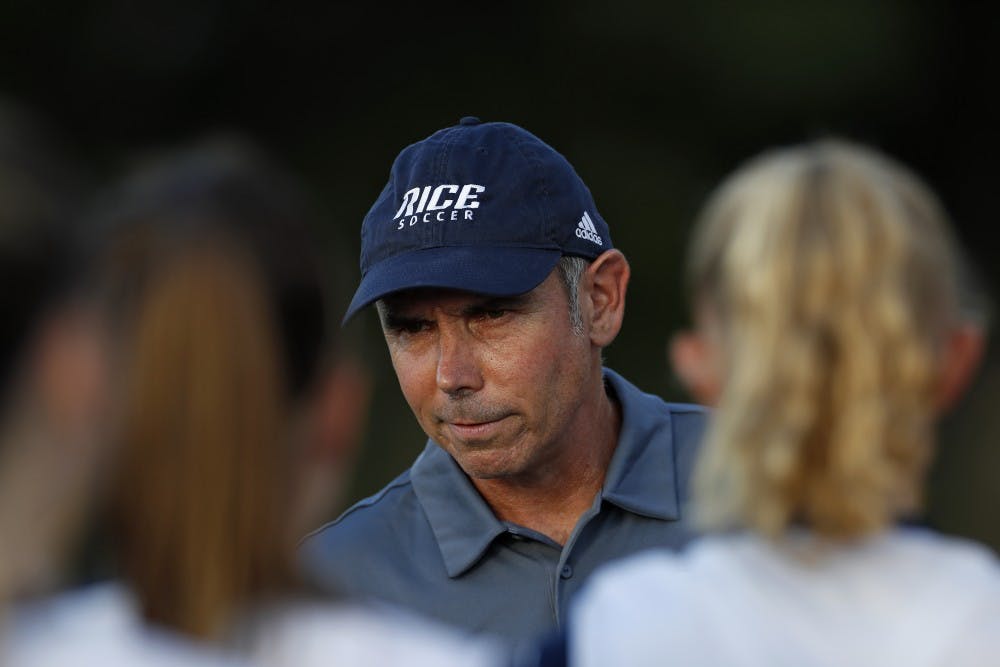 Brian Lee, first-year head coach of Rice soccer, grew up in Scotland. According to Lee, growing up in a country widely known for its youth and professional soccer leagues led to his indoctrination in the sport.

“If you’re a young boy in England or Scotland, there’s only one sport, literally,” Lee said. “We went to school, and then we went and played soccer and we played on our school teams. That’s all we knew and that’s all we did dawn to dusk, really.”

When Lee was an adolescent, his father retired from the Scottish military and his family moved to Florida. There, Lee said his experience playing in European youth soccer leagues gave him an advantage over the other American players and eventually led him to play collegiate soccer at Furman University.

Two years after his graduation from Furman, the university created its women’s soccer program and Lee became its first head coach.

“As I graduated, the Title IX explosion hit, [which] increased [women’s] softball and soccer exponentially,” Lee said. “So there were opportunities for jobs right out of college.”

Following his 11 years as a coach at Furman, Lee transitioned to become the head coach of soccer at Louisiana State University. At LSU, Lee’s teams qualified for six NCAA tournaments. But once the head coaching position opened at Rice, Lee said he saw an opportunity with more potential.

“From a soccer perspective, I think the high end of what Rice can accomplish is above the likelihood of that kind of achievement at LSU,” Lee said. “Of the teams that have won national championships and have been to Final Fours, the huge majority of them are elite academic private schools. From a recruiting standpoint, Rice gives us the opportunity to really recruit the elite American athletes in our sport.”

Lee said the transfer of junior defender Mijke Roelfsema from Boston College during the offseason epitomizes the program’s recruiting appeal.

“[Roelfsema] is a great example of it,” Lee said. “I’m sure LSU sent her something when she turned up on the [transfer] portal as well. But the schools she wanted to look at are elite academic schools, so we were able to get her to come to Rice.”

Lee said Rice’s decision not to support a men’s varsity soccer team offers more benefits than disadvantages for his program because the women’s team does not have to compete for field space or conflicting game times.

“We miss not having a men’s team to interact with and watch play, so there’s a little bit of that soccer side of it that’s a negative,” Lee said. “But, in the big picture, it is awesome to be the only soccer program on campus to try and generate all of the soccer interest straight toward us.”

Lee said his short-term goals include instilling his desired style of play and developing a positive team culture. Regarding his preferred game strategy, Lee said his team’s tactics should shift over the course of 90 minutes.

“Formation-wise, we are what you would call a malleable 4-4-2, where we’ve got some movement in our midfield game-to-game where we can do some different things depending on the opponent,” Lee said. “Basically what we try to do is press when it is an appropriate time to press, and other than that, drop in a little bit and press and trap in certain areas of the field, almost like a basketball team would.”

According to Lee, he preaches four core tenets: compare, compete, act professionally and dare greatly. However, Lee said he prefers a hands-off approach toward his players’ personal lives.

“For me, it’s … starting with letting [student-athletes] be as normal a student as they can possibly be, so they get organic friendships that also create interest in the program,” Lee said. “At best, we can integrate our kids as much as possible in their college life; we’re hoping that’s the core piece of it, to get students involved.”