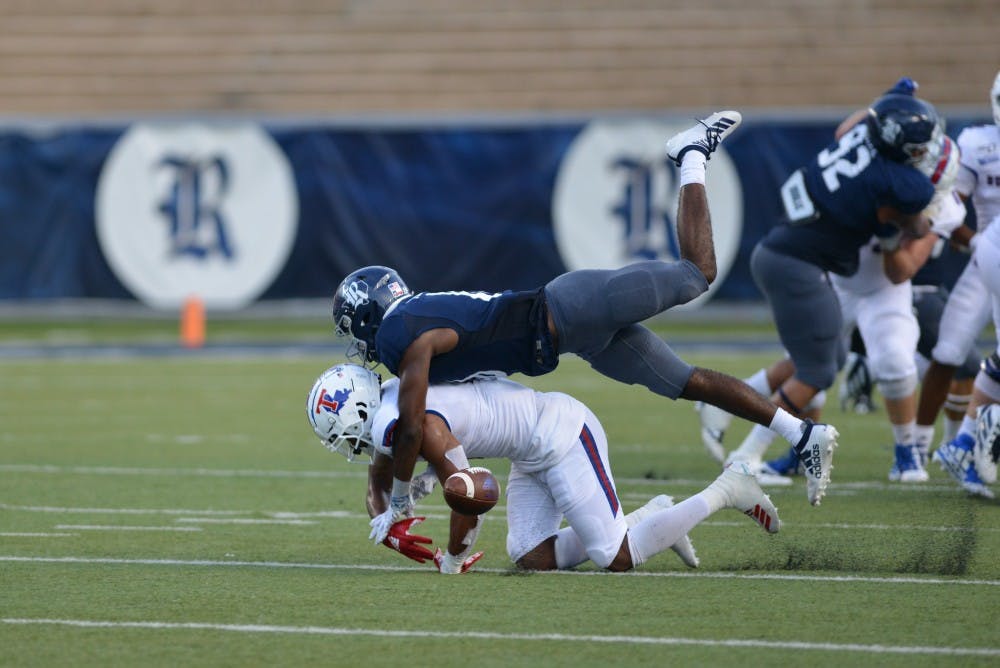 Rice football fell short against Louisiana Tech University in overtime, 23-20, on Saturday night at Rice Stadium in the team’s first game against a Conference USA opponent. The Owls currently have zero wins and five losses on the season.

Redshirt freshman Wiley Green started at quarterback for the first time since suffering a concussion in the Owls’ second game of the season against Wake Forest University. Against the Bulldogs, Green completed 14 of 22 passes for 128 yards and did not throw an interception.

But early in the game, Rice head coach Mike Bloomgren elected to call many running plays. Graduate student running back Aston Walter received a steady dose of carries during Rice’s first offensive drive and capped the possession with a 16-yard touchdown run to put the Owls up 7-0.

Louisiana Tech responded with a touchdown pass from quarterback J’Mar Smith to Adrian Hardy which tied the game at 7-7. Yet, when Rice retained the ball, Walter continued to gain yards on the ground. Less than two minutes into the second quarter, he plunged through the Owls’ offensive line to score a two-yard touchdown which put Rice in front, 14-7. Walter finished the day with 112 yards and two touchdowns.

When Rice’s defense prevented the Bulldogs from tying the game, Bloomgren opted to insert graduate student Tom Stewart at quarterback. During Stewart’s first drive, Rice went three-and-out. On Stewart’s second drive, the Owls were in scoring position with an opportunity to stretch their lead. But when Rice held the ball on Louisiana Tech’s five-yard line, Stewart threw an interception in the end zone. At half-time, the game remained 14-7.

Rice won the pregame coin toss and deferred to receive the ball to begin the second half. With Green back under center, and graduate student running back Charlie Booker earning yards on the ground, the Owls moved into scoring position once more. But redshirt sophomore Will Harrison missed a 36 yard field goal and was removed from kicking duties for the remainder of the game.

On defense, Rice remained strong and pressured Smith effectively. In total, the Owls sacked Smith three times — an output which matched Rice’s sack numbers in the team’s first four games, combined. Nonetheless, at the end of the third quarter, Louisiana Tech running back Justin Henderson ran in for a 26-yard touchdown to tie the game, 14-14.

Late in the fourth quarter, the Owls and Bulldogs traded field goals. Each team then had a last minute opportunity to win the game but neither offense moved into scoring position. Hence, the game went into overtime.

Louisiana Tech won the overtime coin toss and chose to defend first. Rice managed to score a field goal on its possession from the foot of senior Chris Barnes, who is on the roster as a punter. But when the Bulldogs took over, Smith sealed their victory with a 12-yard touchdown run.