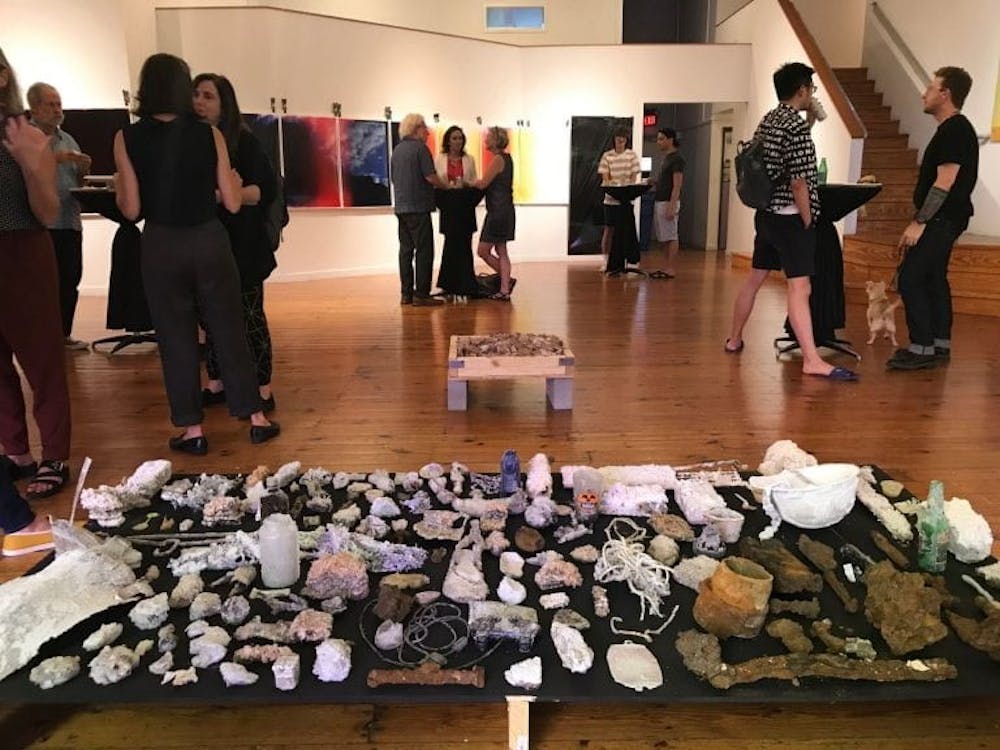 On Sept. 5, the visual and dramatic arts department unveiled its first fall exhibition of the year: “In/Between |  A Rock and a Hard Place: Visions from the Ghost World of How to Survive One’s Sovereignty of Self Destruction in a Land We Assumed We Once Knew” by photography lecturer Justin Raphael Roykovich.

In his exhibition, Roykovich distorts perception of seemingly mundane Texas landscapes, offering unconventional and critical perspectives on the places that lie in the seam of the realities that we take for granted.

“What I really want my work to do is to occupy that ‘In/Between’ space between what we know, what we perceive and what we imagine,” Roykovich said.

The exhibit occupies the main gallery space of Rice Media Center and includes work of varying mediums including photography, assemblage and drawings. In his photographs, Roykovich manipulates light and shadows to create images that make an ordinary landscape look like an utterly alien terrain. At 44 inches by 20 inches, one photograph of the side of a cliff stretches across a gallery wall. With plenty of spectral light leaks and ghostly silhouettes, the image looks captured from some supernatural realm colliding with the fabric of reality.

The eeriness of these works is translated in part from Roykovich’s personal history with the paranormal and his time spent at the Texas Killing Fields, a stretch of land between Houston and Galveston along Highway I-45 where the bodies of over 30 unsolved murder victims have been discovered periodically since the 1970s. Although far from being a ghost hunter, Roykovich used a device called the Ovilus 5 to scan the Killing Fields for electromagnetic disturbances. The device then produced phonetic words based on anomalies in its scan, which are popularly believed to be words from beyond the grave.

“When dealing with this kind of subject matter, it can fall into kitsch very easily,” Roykovich said. “Ultimately, my work does not aim to ‘prove’ anything or to try to convince anyone that there is something spooky out there. I am more interested in the mystery of those stories than actually trying to solve them.”

Roykovich said his efforts with the Ovilus were more directed toward listening to the land itself rather than searching for the voices of the dead. Words and phrases detected by the device played a significant role in Roykovich’s creative process with “In/Between.”

“What I find really fascinating about the gesture is then finding the connections between what responses I get in the Ovilus device to the research I do about that location,” Roykovich said. “I do acknowledge the connotation of the land having its own voice in connection with the ‘spirits’ that the Ovilus is supposedly picking up, as well as the connection to so many global cultures who have very deep and spiritual relationships to specific land areas. What I find potentially powerful is taking the time to simply sit and listen to what an environment might be telling you.”

Roykovich’s sensitivity toward the “voices” of environments comes from his reflections on his travels throughout Texas. Prior to becoming a lecturer at Rice, Roykovich lived and worked at the Galveston Art Residency for a year. In contrast to Roykovich’s nomadic lifestyle, which has allowed him to work in several major cities in and around New England over the span of a decade, his residency in Galveston gave him what Joshua Fischer, former curator at the Rice Gallery, calls “grounding” in his essay accompanying the exhibit.

“Someone once told me that I have ‘more wings than roots’ and that's true to a degree, though that's also been out of necessity,” Roykovich said. “Though the older I get, the more I feel roots growing deeper in each location I am in.”

Roykovich’s travels have cultivated a unique environmental consciousness with a particular awareness of human impact on the natural world that shines through his “In/Between” exhibit.

“Part of Roykovich’s intention is to forge a deeper connection to places we may take for granted and that are rapidly changing because of climate and social change,” Fischer writes.

At the center of the gallery lies a palette resting on the ground with rocks, gravel and dirt littered across it. At first glance, the display may not seem any different from the rubble currently surrounding Sid Richardson College. Upon further examination, however, visitors will discover various obscure items: a lone high-heeled shoe, a defunct PlayStation controller and an abandoned bubble wand lie in the debris among other random objects. With consideration to the exhibit’s themes, this piece seems to capture the “in between” moment when an item ceases to be a possession but has yet to meet its fate in some landfill; after they are tools but before they are trash, they are relics of human life. The sculpture manifests Roykovich’s nuanced perspective on how people’s actions are changing the environment even without them noticing.

“The work is very much a reflection of how I feel not only as an artist, but as a human being at this moment in time,” Roykovich said. “Things are changing, things are moving, things are happening very rapidly that will be irreversible and that will almost inevitably have negative consequences, not only for me, but for literally the entire planet.”

Roykovich’s work is less about coming to definitive conclusions about the volatile state of our environment and more about developing nuanced perspectives and an awareness of uncertainty. “Seeing, or trying to see, is actually a huge component of the work in the show,” said Roykovich. “There are many instances in the show that play with the idea of one side or the other and how we might perceive seeing both those sides while from a space observing In/Between them.”

In the spirit of change, Roykovich noted that the exhibit will continue to change throughout its tenure as certain works are added and removed. One piece to be added will include a list of words Roykovich heard through the Ovilus. “The space is in flux, and it may end up looking very different from when it first opened, either through intention or through circumstance,” Roykovich said. “But that's how life is - Things change, things adapt, things evolve. In that way, the show is very much a reflection of the time period we find ourselves in of being forced to do those exact actions, whether we want to or not.”