Bloomgren should stick with Green at QB 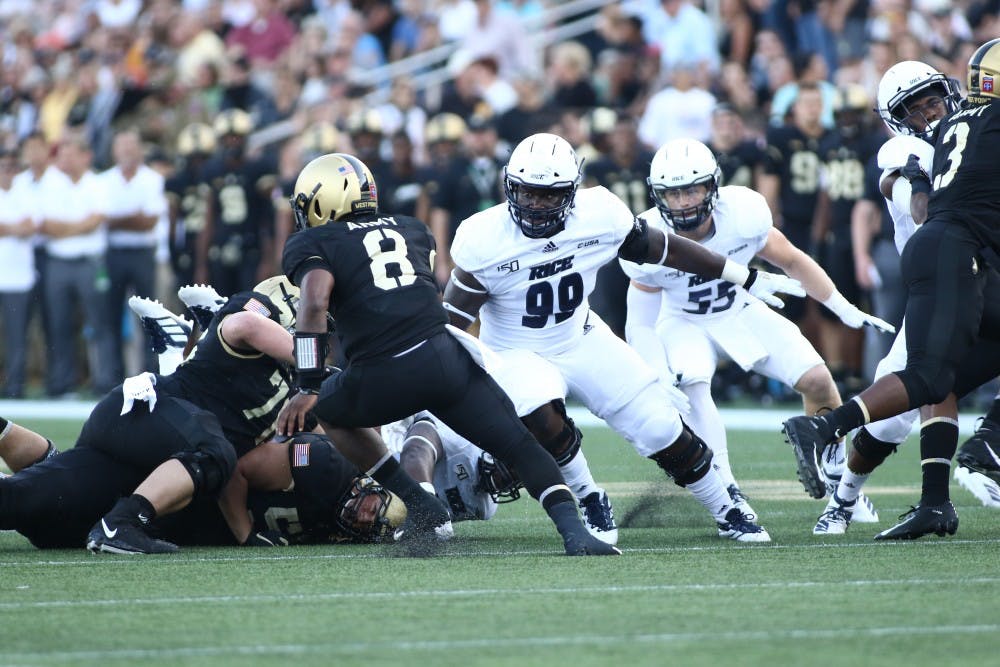 Rice football fell to Army West Point 14-7 last Friday, but that shouldn’t be a reason for head coach Mike Bloomgren to make a change to the starting quarterback position. After leaving the status of the position up in the air for nearly the entire offseason, and even stating that he would be willing to open the season playing multiple quarterbacks, Bloomgren named redshirt freshman Wiley Green the opening day starter at last Tuesday’s news conference.

The Bloomgren era is just over a year old, but already quarterback uncertainty has become a staple of his tenure. In Bloomgren’s first season at the helm, he played five different quarterbacks. Shawn Stankavage, a graduate transfer from Vanderbilt University, opened the 2018 season as the presumed starter. But during the second game of the season, Bloomgren opted to provide then-redshirt junior Jackson Tyner an opportunity to play instead. Although Bloomgren quickly reverted back to Stankavage as the full-time starter, when three blowout losses ensued, Bloomgren put then-redshirt freshman Evan Marshman under center to start against Florida International University — and the team lost 36-17. By week eight of the season, two freshman quarterbacks, Marshman and Wiley Green, rotated starting duties — Marshman started once while Green took the field first in the other three contests.

The quarterback carousel should end this year. While some level of in-team competition is necessary and healthy, especially following a coaching change, playing five quarterbacks in a season should be an anomaly, rather than a pattern. The Owls’ offense needs time to acclimate to a single passer. Green needs to be allowed to have good games, mediocre games and yes, even bad games, without the threat of his swift removal in favor of Marshman, or this year’s resident graduate transfer, Tom Stewart. Green’s first game this season against Army West Point wasn’t spectacular; he went 7-14 for 62 yards. But he had a nice 38-yard pass to junior Austin Trammell in the second quarter. Was it amazing? No, but was it worthy of an immediate quarterback change? In my opinion, also no. The game was low-scoring and run-dominated; Army  West Point had 53 passing yards in comparison to Rice’s 62, while both teams had more than 150 rushing yards, giving some context to Green’s performance.

The nature of the Army West Point game did not allow for a decisive determination on Green’s play, and he has already demonstrated his passing prowess during his three starts last season, throwing for 313 yards against the University of Texas, El Paso, going 21-37 against the University of North Texas and leading the Owls to a win against Old Dominion University. He just needs time to meld with this iteration of the Owls’ offense, creating a cohesive unit. A quarterback is the head of an offense, and if Bloomgren keeps rotating out the head, it will only create chaos, as the Owls struggle to adjust to a new hybrid combination of head and body each week. And reps on a practice field won’t suffice. Game experience is necessary for this offense to unify.

Switching out quarterbacks after a poor performance is an easy fix, but a poor one. Development is hard but much more sustainable. Barring a sustained series of awful performances, Bloomgren should show full confidence in his starting quarterback. It will pay dividends in the end.