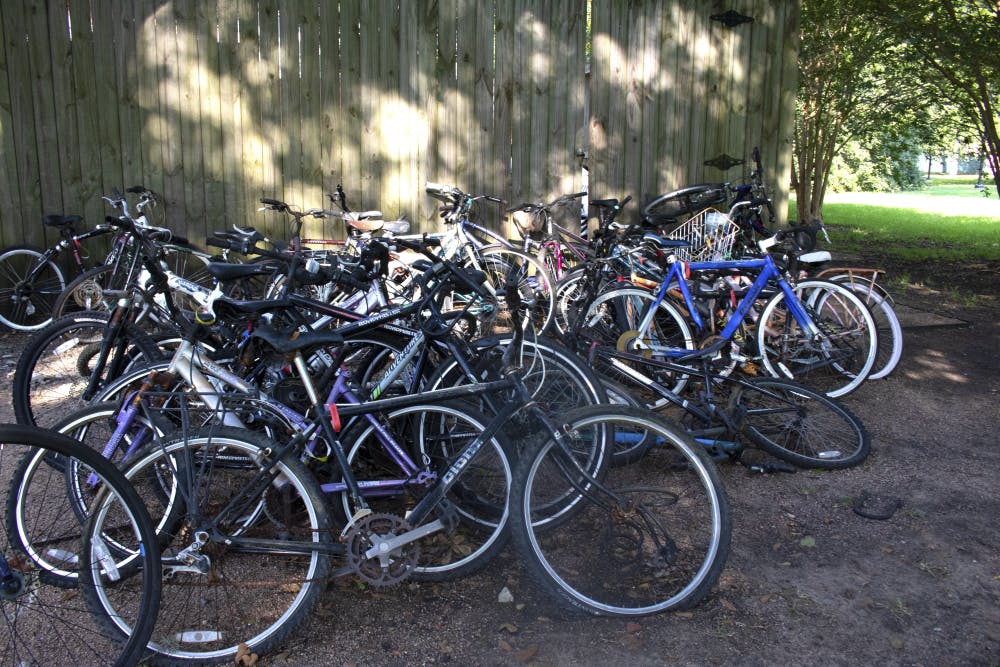 A large pile of abandoned or unclaimed bikes has been left in an unsecured pile outside the Rice Bikes workshop. Rice Bikes took charge of the process of storing and repurposing bikes deemed abandoned over the summer as well as contacting the owners of bikes registered to the Rice University Police Department, according to Rice Bikes General Manager Luke Howe-Kerr.

Howe-Kerr said that Rice Bikes did not secure the bikes because they did not have sufficient space to store them.

“It’s mainly a fact that we don’t have the space for it, and RUPD doesn’t want to use their [bicycle storage] cages,” Howe-Kerr, a Lovett College senior, said. “We’re looking into expanding — we have that back courtyard.”

Tiffany Bauman, a Will Rice College senior, said her bike, which was registered, went missing after she left it on campus over the summer and was told by Housing and Dining that all bikes left on campus over the summer needed to have a summer sticker. The RUPD website does not mention a summer sticker, and Rice Bikes Projects Manager William Miles said he had never heard of the sticker.

“I left my bike outside of Will Rice Old Dorm with a U-lock on it,” Bauman said. “I came back for [Orientation] Week and my bike was no longer there.”

Bauman said that she contacted RUPD, H&D and Rice Bikes, and said she was told by Rice Bikes that her bike was not on the list of registered bikes obtained during the “sweeps” during the summer. She said she noticed a pile of bicycles outside the Rice Bikes workshop and was worried by the fact that they were unsecured.

“I said something along the lines of ‘Wait, can’t anyone just come out here and take a bike since they aren’t locked?’ and they said that no one is supposed to,” Bauman said. “But I mean, there are like a hundred bikes outside the office that anyone could easily take.”

Bauman said that although RUPD and Rice Bikes were both helpful, she worries that her bicycle may have been stolen from the unsecured pile outside the Rice Bikes shop.

“It’s just really frustrating that my lock was cut off and probably taken during a sweep because I didn’t have a summer sticker on it, and then just left outside for anyone to take,” Bauman said. “It’s a nice bike, so if it was just left out unlocked, someone would definitely take it.”

Miles said two “sweeps” for abandoned bikes occurred during the summer. Rice Bikes employees worked alongside RUPD to tag bikes on campus that looked abandoned or in disrepair, and if the tag was still in place a month later, Rice Bikes and RUPD would cut the bike from the rack and take it to Rice Bikes, according to Miles. Miles also said he had never heard of the summer sticker.

Howe-Kerr said that prior to this summer RUPD had been in sole charge of cutting and managing abandoned bikes and had kept them stored in cages. If the bikes were left unclaimed for a period of time, Rice Bikes would come to the RUPD cages and take the ones they wanted to sell or scrap for parts, according to Howe-Kerr.

“The main issue with that was that RUPD was putting in a lot of effort to manage all the bikes [and] store them and [were not] really getting much benefit out of it,” Howe-Kerr said. “And so they wanted a way to cover the hours that they were putting into it.”

Rice Bikes also took over the process of contacting bike owners, according to Howe-Kerr. Rice Bikes received a list of bike registration numbers and sent emails to the owners of registered bikes, informing them that their bikes had been cut and providing them with options: to pick up the bike within a week or donate it to Rice Bikes, according to Miles. If the owner did not respond, the bicycle was considered donated to Rice Bikes.

Howe-Kerr said he estimates that fewer than half of bikes obtained on sweeps were registered. According to Miles, after being tagged for a month and cut, unregistered bicycles will be scrapped for parts or refurbished and sold.

Miles said that the purpose of conducting these sweeps is to meet a student demand for affordable bicycles.

“It’s not like we’re maliciously looking for bikes, like ‘we want this’ or ‘we want that,’” Miles said. “It’s just that [we are trying] to expand the shop and grow what we can offer. Every shift last year, at least one person would come in asking to buy a bike. We don’t have a lot on offer. People want cheap bikes, which is what we sell [these bikes] for.”