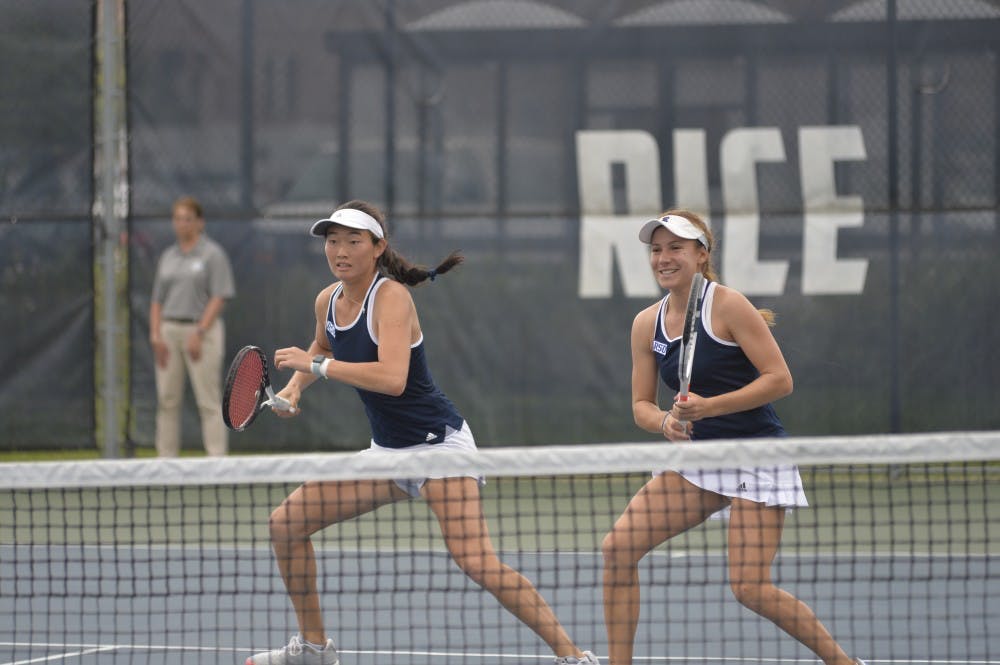 The Rice women’s tennis team celebrated Senior Day this past Sunday by stretching its win streak to three after defeating Florida International University in a 4-0 win. It was also the second straight match in which the Owls shut out their opponent 4-0.

This past Friday’s match against No. 47 University of South Florida was the first match for Rice since the Owls defeated the College of William & Mary almost two weeks prior. The Owls fought back from behind in two out of three doubles matches to win the doubles point. Freshmen Anastasia Smirnova and Diae El Jardi were the first pair to finish, defeating USF’s Alexandria Mjos and Selin Yaylali 6-2 on Court Three. The Bulls won on Court Two to put the pressure on Court One, where sophomores Michaela Haet and Linda Huang found themselves down 4-3 in the deciding match of the doubles point. However, they responded to the pressure by winning four of the next five games to win  7-5 and get the doubles point for Rice.

Head coach Elizabeth Schmidt said doubles play has been a strength for the Owls throughout the whole season.

In singles play, Anastasia Smirnova started the Owls off with a dominant straight-set win (6-0, 6-1). Freshman Victoria Smirnova followed her twin sister with a (6-3, 6-3) victory over Vanja Klaric. Schmidt said the performance of the Smirnova sisters has been strong.

“They have been great additions to our team,” Schmidt said.  “I think they have developed most in [their] physicality.”

Sophomore Michaela Haet, the No. 109 singles player in the country according to the Intercollegiate Tennis Association rankings, also won her singles match. She defeated the  country’s No. 48 player, USF’s Ana Roman Dominguez (6-1, 6-2).

After the match, Schmidt said she was happy the team built off of its performance in the doubles matches throughout singles play.

“I was super proud of [us] keeping the momentum going after the doubles [point],” Schmidt said.

Sunday’s match against Florida International University brought multiple storylines. The Owls were celebrating the contributions of senior Fernanda Astete to the Rice tennis program on Senior Day, while also dealing with the challenge of changing locations due to thunderstorms. The Owls didn’t let the distraction of looming storms bother them. They captured the doubles point after a 6-1 win by sophomore Anna Bowtell and Victoria Smirnova and another 6-1 victory by junior Priya Niezgoda and Anastasia Smirnova.

Niezgoda, Anastasia Smirnova and Huang grabbed the lead in opening singles sets before the looming thunderstorms finally came to fruition. The Owls resumed the match against FIU indoors at the Sweetwater Country Club in Sugar Land, initially with only one available court, which Anastasia Smirnova used to secure a (6-1, 6-2) victory. More courts soon opened up, which allowed Huang and Niezgoda to secure the clinching points against the Panthers.

The Owls’ next match is also their last match before the Conference USA tournament. Rice will look to prepare itself for the postseason by facing the University of Houston at home, on April 13 at 11 a.m.