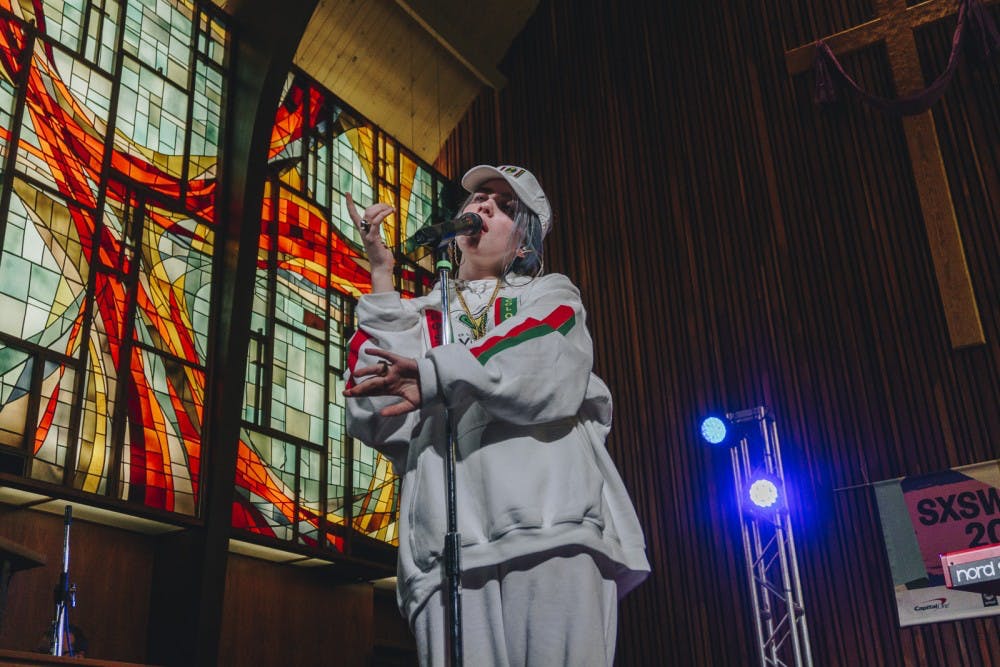 Slurping noises introduce pop artist Billie Eilish’s new and first album, “WHEN WE ALL FALL ASLEEP, WHERE DO WE GO?” Giggles are accompanied by Eilish stating “I have taken out my Invisalign, and … this is the album.” Weird ASMR or Eilish having fun — the 14 second introduction sets the tone for the rest of Eilish’s album. Brooding and weird at times, the 14-track album carries an underlying taunting tone that shows Eilish is here to have fun.

Eilish’s meteoric rise to the top of the pop scene began with her platinum single, “Ocean Eyes,” which captured the hearts of a young fan base looking for an artist that resonates with them. Since then, the 17-year-old has seen massive success for her subsequent EP and singles, with over 35 million monthly listeners on Spotify alone.

“WHEN WE ALL FALL ASLEEP,” Eilish’s first studio album, shows tremendous growth in the artist’s style and direction. Released March 29, the album features experimental tracks with heavy bass, dark topics and Eilish’s signature crooning voice. After its introduction, the album kicks off with the bass-heavy “bad guy,” which features Eilish almost-chanting over a fast paced beat. Here, Eilish does not hold back in her lyricism, singing “I’m that bad type / Make your mama sad type / Make your girlfriend mad tight / Might seduce your dad type,” lyrics that might make older listeners cringe or feel uncomfortable.

But Eilish doesn’t care, and this shows throughout the album. Her disinterest in the listener’s expectations continues with “xanny,” where her characteristic voice is intentionally tarnished through heavy bass and vibrato. To her credit, Eilish condemns the widespread use of Xanax, a prescription drug used for anxiety, in this track (“Don’t give me a Xanny, now or ever”). But the experimentation with her voice and incorporation of intense bass show that Eilish wants to move beyond her pastel, indie pop roots.

This disregard for the formula that catapulted her into fame is both a benefit and detriment on the album. While Eilish has a no holds barred attitude in her lyricism and style, that same attitude does not extend to her vocals — with the exception of “wish you were gay” and “when the party’s over,” back-to-back throaty ballads in the middle of the album. Beyond these tracks, the album features mostly restrained vocals from Eilish, a letdown for longtime fans who originally liked Eilish for her strong voice.

In substitution for her voice, Eilish brings in a slew of experimental styles that push the boundaries of her defined genre, pop. In “bury a friend,” background music and sound effects make the track sound like something from a horror flick — but in a compelling, startling way. In “8,” the majority of the vocals are pitch-shifted, resulting in a child-like Eilish voice. And in “my strange addiction,” Eilish samples a scene from her favorite show, The Office, where Michael Scott mentions a character named “Billy.”

Outside of the album’s musicality, Eilish plays on one of her biggest strengths: her intense fanbase. In addition to the traditional album, Eilish also included a “Spotify album experience,” where listeners can watch visuals associated with the tracks inside Spotify. These visuals range from pastel, colorful and weird (as seen with “bad guy”) to recordings of Eilish performing in front of crowds (“wish you were gay”). To top it off, Eilish also created a physical “Instagram museum” in Los Angeles — collaborating with Spotify, Eilish decorated rooms to represent tracks in rooms with different temperatures and colors.

Eilish knows her crowd very well, which means her groundbreaking, experimental album is intentionally so — she knows that her fans won’t fault her for having a little fun.

“WHEN WE ALL FALL ASLEEP, WHERE DO WE GO?” can be found on all major streaming platforms.