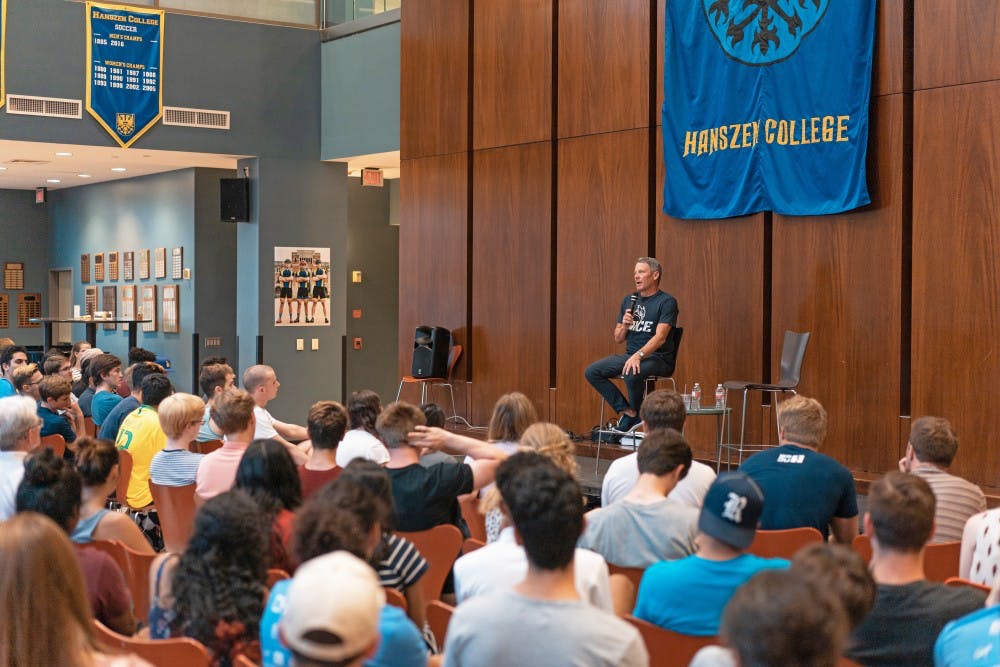 Lance Armstrong, the cyclist whose seven Tour de France titles were revoked due to doping, answered questions ranging from his cheating scandals to whether he’d donate to Hanszen College in a candid question and answer session Tuesday evening.

A camera crew from ESPN filmed the event, which was hosted by the Hanszen Academic Fellows, for the the 30 for 30 documentary series.

Moderator Nik Liebster, a Hanszen senior, and fellow students asked questions about Armstrong’s decision to engage in doping, which he said was a “collective decision” in 1995 among himself and other bikers.

“We were faced with this choice,” Armstrong said. “We’re in this world that we thought was, ‘Oh shit, let’s just show up and try hard and fight and win,’ and all the sudden we have knives and they have guns and we’re like ‘Oh no, what happened,’ so then you buy guns so you can join the gun fight, which is figuratively what we did.”

Armstrong said he resisted the doping trend for “a long time.”

“We held out, we held out, we kept getting our ass kicked and finally we were like, ‘We’re not doing this anymore,’” Armstrong said.

Liebster asked Armstrong about the “extreme actions” he took to cover up doping allegations before accepting blame.

“I would look out there [at press conferences] and be like ‘Look at all these assholes, they’re going to ask these stupid questions,’” Armstrong said. “I still thought I was in the race. How people over time reacted to my behavior was the ultimate downfall.”

Armstrong responded to an audience question asking whether he doped during his comeback in 2009 with “absolutely not.”

Liebster asked Armstrong what he regretted from his past.

“I deeply, deep regret just not having the humbleness to catch myself and be like, ‘You’re out of the race, man; this is not a competition, just sit there, be gracious, be humble,” Armstrong said. “I was always so combative.”

One audience member asked Armstrong whether his victories would have occurred without the influence of doping.

A reason Armstrong said he joined in on doping as opposed to calling attention to the problem is because there was no test to detect the drug Erythropoietin, also known as EPO. The half life of EPO is five hours, which Armstrong said made it “easy to game the system.”

“The dirty secret is EPO was very competitive, was totally undetectable, and most people would tell you if taken under the care of doctor completely safe,” Armstrong said.

Armstrong said he doesn’t believe EPO should be legalized. However, he also said that enforcement agencies are “remarkably ineffective.” He cited statistics that the worldwide anti-doping budget is $380 million, surveys suggest 30 to 50% of athletes engage in doping and agencies catch less than 1% of these athletes.

“I don’t know what class y’all are in, [but] that’s a failing grade,” Armstrong said.

“I’m the president here,” Mabe said to the laughter of the audience. “That’s not to flex … Would you be interested in contributing to the New New section of Hanszen?”

Armstrong responded with, “Send me your deck, buddy.”

Liebster asked if Armstrong would participate in next year's Beer Bike by biking for Hanszen.

“I heard bikes and beer and I was like, I’m in,” Armstrong said.

The final audience question Armstrong answered was about what he wanted to be remembered for 50 to 100 years from now. Armstrong said his most important job is being a good father. His son Luke is a freshman at Jones College.

“If I can have a son at Rice, that’s already a good indicator that I’m not a total dipshit,” Armstrong said.