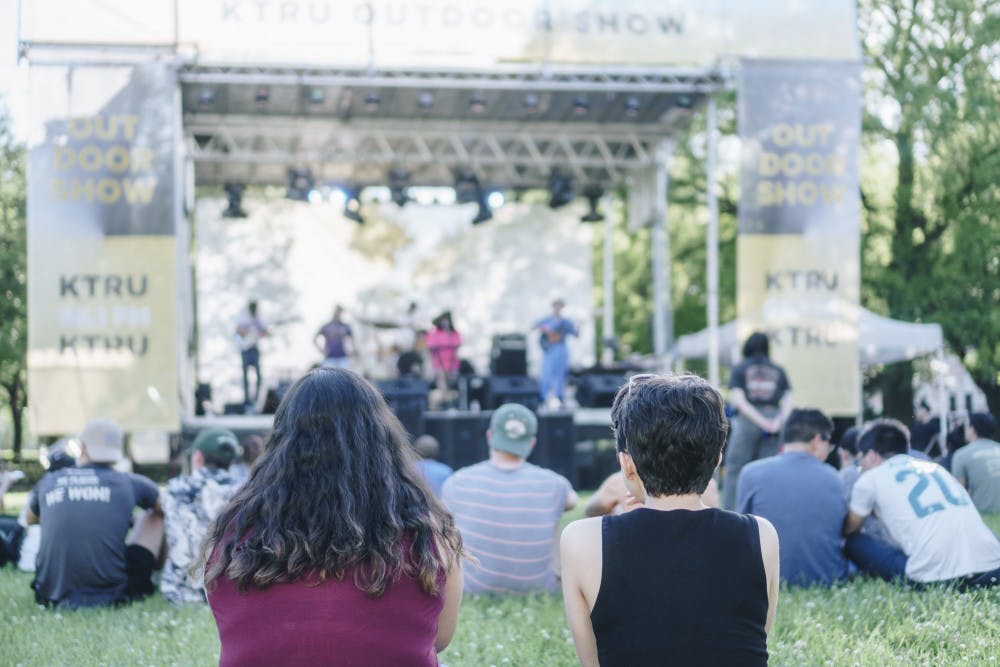 On Saturday, the Central Quad came alive as a multitude of students and community members gathered on picnic blankets for the 28th annual ktru outdoor show. The show, lasting eight total hours, featured a diverse mix of acts from the quirky indie duo Coco & Clair Clair to the intimidating performance of Kilo Kish.

The show featured eight separate acts, kicking off with student band Five Foot Five at 3 p.m. In between sets, ktru alumni Yessi (Jessica Fuquay, Duncan ‘14) entertained the crowd with niche hits from rising stars like Rico Nasty. A beer garden, located to the right of the crowd, kept concert-goers over 21 years old entertained, while student art exhibitions behind the main crowd captured others’ attention. Installations like Julia Casbarian’s “Telefrag” revitalized the usually under-utilized quad. In the daylight, they dominated the space — at night, they formed interesting dialogues with other student artwork, such as “untitled,” a projection by Ashton Drake that lit up when the sun went down.

After Five Foot Five left the stage, pop artist Britt took the stage and entertained the mostly sitting crowd with her thrilling vocals and songs off her latest EP, Kill the Man. Instrumentals played on a track for Britt, who had no band support.

“I’m just standing up here, awkward,” Britt said in the middle of the set. “I don’t really know how to dance.”

Luckily for Britt, she had some backup support — the ktru bunny, whose relentless energy drove the crowd to groove a bit more. The bunny, a costumed ktru volunteer, kept the energy up through ceaseless dancing, crowd engagement and the occasional dance battle.

Britt was followed by high energy hip-hop act OG Shyne. Donning a blue 23 jersey, Houston-based Shyne leapt around stage belting out songs about topics ranging from LeBron James to 4/20. She also brought on support to maintain the energy of her set, and they provided solid background vocals as well as solo performances.

Synth pop band Sasha and the Valentines came on at 6 p.m. to serenade the crowd with chill, soothing tunes. The lead singer, wearing bright pink, hummed and crooned her way through a relatively short set. Most notably, the instrumentals of Sasha and the Valentines included some unconventional sounds, such as what seemed to a shaker that produced tambourine-like noise.

The trio that typically makes up the band Wrestlers was unfortunately reduced to their main DJ. According to Director Angelo Ragan, the other two were unable to make it. Still, electronic pop Wrestlers put on a good show, with danceable remixes and sound. As expected, the ktru bunny was at his peak during this set, bouncing around the grass as the sun began to set.

Next up was the quirky, likeable duo of Coco & Clair Clair. Mixing hip hop and pop sounds, the duo brought their big personalities to the stage with many pauses for audience engagement.

“If you all break free, they can’t stop you,” Clair said to the fenced-off beer garden attendees. “F*** the cops! … Just kidding.”

After asking for as much reverb as possible, the duo kicked off their set, which successfully delivered the ephemeral vibe as heard on track. After a song, they took a break to talk more.

It was difficult to follow up Coco & Clair Clair’s stage presence, but Diet Cig managed to do so at 9 p.m. The alternative rock duo featured high energy vocalist Alex Luciano, who kicked her way around stage and asked the audience to repeat self-love mantras after her.

She also alluded to 4/20, but in a different light.

“It’s f****d up how many Black and Brown people are in jail while we’re smoking here,” Luciano said. Her statement was followed by crowd chants of “F*** 12!”

Like many of the performances before her, Luciano thanked the crowd profusely for being there with them. At this point, audience members had grown to around 150, with most members standing and dancing as opposed to sitting on their blankets.

The last and biggest act of the night, multidisciplinary artist Kilo Kish, closed the night off with an energy that can only be described as chaotic. Emerging from the back of the stage in a glow of dark blue light, Kish stood in front of the crowd for a few intimidating seconds before beginning her set. Donning intense eyeshadow, Kish made consistent eye contact with audience members as she performed songs off of her 2016 album, Reflections in Real Time.

From Britt’s shyness to Coco & Clair Clair’s laughter to Kilo Kish’s intensity, the ktru outdoor show delivered on its promise of a diverse range of sound and talent. Festival goers seeking a sunny way to enjoy their 4/20 — er, Saturday — found one.