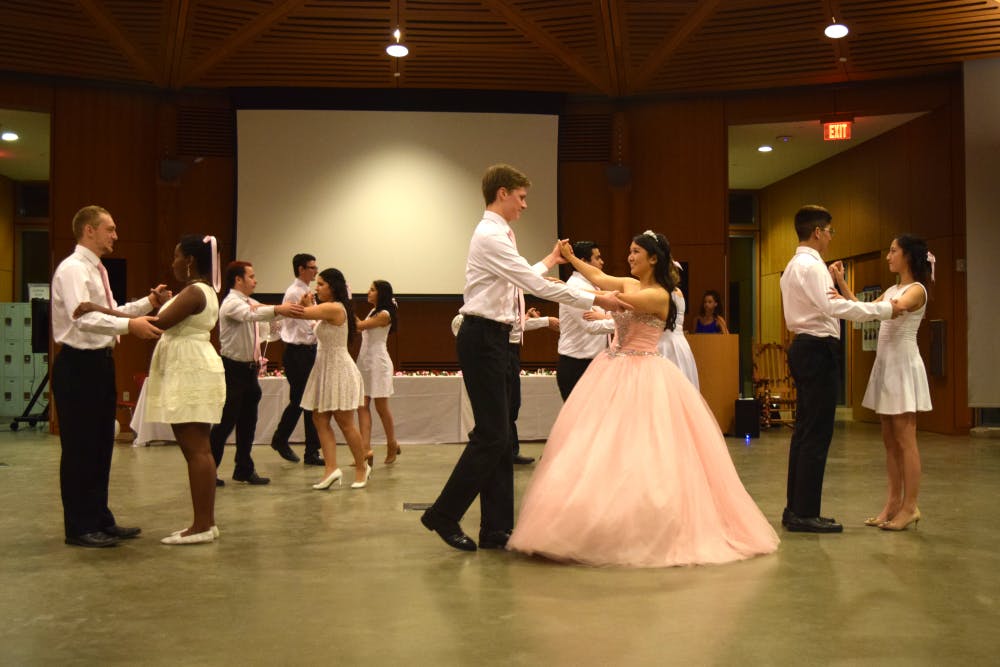 The Hispanic Association for Cultural Enrichment at Rice (HACER) made Victoria Saeki-Serna’s fantasy quinceañera a reality on Saturday at Quinceañera 2019.

Every year, HACER collects applications from Rice students of all backgrounds and genders who dream of having a quince. This year, Saeki-Serna was the lucky chosen applicant whose quinceañera was brought to life by her Rice community.

“I didn't have a quinceañera on my actual 15th birthday for a number of reasons, and looking back on that period of my life, that was my biggest regret,” Saeki-Serna, a Baker College freshman, said. “In all honesty, however, I think that having my quinceañera here at Rice was much more special, as I had many more and closer friends come.”

A quinceañera is an honored tradition in many Hispanic cultures.The extravagant party celebrates a girl’s 15th birthday, which signals her transition from childhood to womanhood. Quinceañeras usually take months to plan and infamously necessitate large amounts of money;  however, a girl’s family and friends will often pitch in to make her dreams a reality.

From the dress to the traditional ceremonies, HACER works hard to replicate a quinceañera for Rice students every year. The celebration increases the Rice community’s awareness of the honored tradition and increases visibility of Hispanic culture on campus, according to Brenda Venegas, head of the 2019 Quinceañera organizing committee and HACER Socials Chair.

“Given that Houston has such a strong Hispanic community, it is no surprise to see quinceañeras taking pictures on campus,” Venegas, a Sid Richardson junior, said. “However, most Rice students may not be familiar with the background and elements of the quinceañera.”

McMurtry Commons served as a spacious venue for the celebration, complete with pink balloons and sparkly centerpieces. In accordance with tradition, there was a special table front and center reserved for the quinceañera and her court. A court traditionally consists of seven of the girl’s male friends or family members, called chambelanes, and six female friends called damas. Saeki-Serna assembled her court with friends from all over Rice campus who agreed to celebrate her special day alongside her.

The court’s main task in preparation of the event was nailing down choreography for the traditional group dances. Samantha Ledesma was one of the people in charge of choreographing la baile sorpresa, or surprise dance.

“We had several practices that lasted up to three hours sometimes because there was a lot of choreography to learn,” Ledesma, a Hanszen College sophomore, said.

At the party, the court proved that practice makes perfect by executing an elegant waltz and a fierce Jennifer Lopez routine. Saeki-Serna then grabbed the spotlight to showcase her talent for ballet, sending the crowd into thunderous applause.

Another tradition honored was the Quince video, which features a montage of pictures of the quinceañera to celebrate special moments in her life and transition into maturity. Saeki-Serna’s video was produced by Karina Cavazos Gonzalez and featured photos from Baker O-Week 2018, showcasing Saeki-Serna’s transition to college life and giving the celebration what Venegas called a “special Rice twist.”

Following the traditional showcases, the crowd joined Saeki-Serna and her court for more dancing and eating to celebrate her big day. Even though the party wasn’t actually celebrating her birthday, it still succeeded in honoring and celebrating the life and growth of a young woman.

“I was surprised by how happy it made Victoria,” court member Eunice Aissi said. “Even afterwards, she was full of joy and gratitude, and honestly I was touched by how much this meant to her.”

HACER’s Quinceañera provides a valuable opportunity for Rice students to experience an enriching cultural tradition according to Venegas. Saeki-Serna explained that Rice’s rendition of the honored celebration is significant both personally and historically for Latino students.

“I have always been taught a quinceañera is symbolic of a new beginning in life. For me, it was special to have the quinceañera as a freshman, as this symbolism matches up perfectly,” Saeki-Serna said. “As a history student, however, I also think of it as a unique tradition which shows the blending and continuation of Latin American traditions from the pre-Hispanic era to modern day. It is not just an occasion to celebrate a new stage of life, but also my pride in my Mexican heritage.”

“My favorite part of the Quinceañera was seeing individuals outside the Hispanic/Latin[o] community coming out to support the event and learn more about a tradition that is so valuable to [Latinos],” Cavazos Gonzalez, a Martel College freshman, said.

Quinceañera is one of many events organized by HACER that highlight Hispanic culture on campus. Other events presented by HACER include their annual Latin night at Willy’s Pub and their showcase event, “¡Ritmo!”