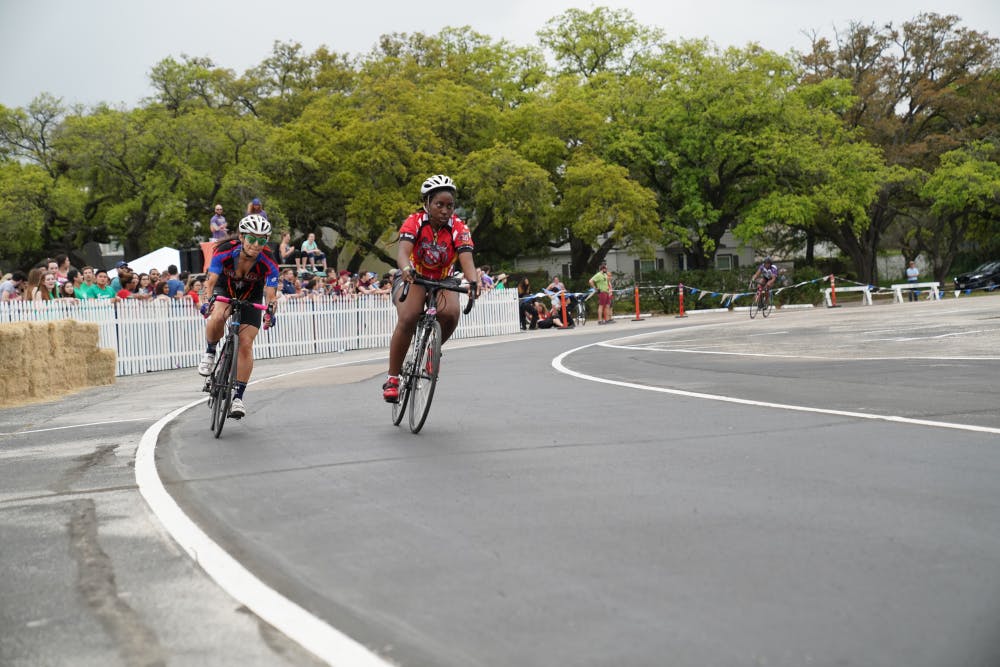 The Graduate Student Association claimed first place in both the alumni and women’s Beer Bike races, while McMurtry College took first in the men’s Beer Run, according to official results posted by the Rice Program Council. However, the results of the men’s and women’s races came into question as Jones challenged penalties against the pit crew during the women’s race and RPC’s reported split times indicated that a McMurtry men’s runner ran his one-third mile split in just over 20 seconds.

Festivities began under ominous gray clouds, but the alumni race proceeded on bikes despite the threat of rain. The GSA raced out to an early lead and did not relinquish it, finishing first in the alumni race for the second time. The only previous time GSA won the race was in 2016, a Beer Run. Mary Natoli, a biker on the GSA women’s team, said watching the alumni race was thrilling.

“It was so exciting,” Natoli said. “Most of us know the whole team; they’re all our friends. It got us even more motivated to win so we could have a GSA sweep.”

The possibility of a sweep moved closer to reality after GSA won the women’s race. Natoli said she was extremely proud to be part of the first GSA women’s team to win Beer Bike. The GSA women came close to victory in both 2017 and 2018, according to Natoli.

“Clearly, we would not have won without our amazing chug team and pit crew putting out an extremely solid race and getting no penalties across the board,” Natoli said. “I am just so happy that everything came together this year for a flawless race from the GSA.”

On the track, however, there appeared to be a different victor. Jones College dominated from start to finish on the track, finishing first by a margin of nearly 30 seconds. But 70 seconds worth of pit interference penalties on Jones, compared to zero seconds of penalties for the GSA, pushed Jones into fourth place.

Jones Beer Bike coordinator Hannah Park said she has reached out to RPC to ask about the penalties, which she believes are incorrect. She said contacted campuswide Beer Bike coordinators Rebecca Artall and Enoch Peng, and they told her that the pit violations were most likely assessed because of false starts or people in the pit crossing lane lines.

“After seeing the posted results, many Jonesians were infuriated because we clearly won the race without any penalties,” Park, a junior, said. “We are still unsure on what we did wrong. We're currently waiting until Thursday at the latest to see what the judge's sheet says.”

Furthering the confusion about penalties, the Lovett College women’s bike team was awarded ten seconds for pit violations. Lovett did not have a women’s team, according to race announcer Jake Reinhart.

Natoli said she was extremely impressed with Jones’ performance even though they ultimately did not win.

“I know how strong our team was, and for them to be even stronger, that’s just incredibly impressive,” Natoli said. “I have to hand it to them. Jones women should be feared.”

Duncan finished second in the final standings, the highest ever finish for the college. Junior Sophia Jefferson and senior Caroline Cobb, the Duncan captains, said they weren’t surprised by the college’s success.

“People said that we overperformed, but we just performed,” Jefferson said. “We knew that we were good. People just underestimated us.”

The McMurtry men’s team ultimately finished first on the track by 59 seconds over second place Will Rice College, according to the results posted by RPC. However, McMurtry’s sixth runner is listed as having run a 22.28 second split, which would have required him to run over 50 miles per hour. Usain Bolt, the fastest man in the world, has reached a peak speed of 28 miles per hour in the 100 meter sprint.

After 40 seconds of penalties were assessed to McMurtry and none to Will Rice, McMurtry won the men’s race by 19 seconds, according to RPC. Will Rice runner Christopher Walters said there is no way the results posted by RPC are correct.

“The splits have us a minute apart when we actually finished just a few seconds apart,” Walters said. “So with penalties it should be a Will Rice win by 30 seconds.”

Walters said he thinks someone may have accidentally added a split of 22.28 seconds when it should have been a full minute longer. RPC declined to comment in time for print on this potential error.

Minutes before the women’s race, raindrops began to fall. The drops eventually intensified into a drizzle, but the conditions were never bad enough that the women’s race had to shift to a Beer Run. The men were not as lucky. Due to the drizzle, the track became too wet for Beer Bike, necessitating a run instead, according to campuswide coordinators Peng and Artall.

“This year, the call was made when the men starting warming up; the rain started to pick up at the same time, and the track got too slippery so it was switched to a run,” Peng and Artall said via email. “Because we had worked out how we wanted to approach a Beer Run earlier in the week, we followed the plan we had set out: [Emcees] announced multiple times, and we informed the college coordinators that their runners needed to come into the track if they weren't already there.”

Jones captain Will Yarinsky, whose bike team was picked to finish in the top five by his fellow captains in the Captains’ Beer Bike poll, said it was extremely disappointing to shift to a Beer Run given the amount of training his team put in throughout the year.

“If it’s a Beer Run, it’s kind of a fluke,” Yarinsky said. “We want to give the guys who have been putting in a lot of training all year the opportunity to run if they want so they can still be part of it … We didn’t worry about training [for Beer Run], it’s not something we focus on.”

Patrick Kelly, a runner for the McMurtry men’s team, said he only learned the race would be a run when it was announced over the loudspeaker at the track.

“There were probably, I don’t know, five minutes between us knowing and the race starting,” Kelly, a senior, said.

Kelly said he and his McMurtry team finalized their running order after the race had already started.

Despite the accelerated planning process, McMurtry finished first. The college led almost wire-to-wire, taking the lead after on the second runner and maintaining the advantage for the remainder of the race. Taka Mollenkamp, McMurtry’s second runner, said he knew his college had a great chance to win after he finished his laps with the lead.

“I was confident in all my runners after me that they were fast,” Mollenkamp said.

He said that when McMurtry crossed the finish line in first, it was hard to contain his excitement.

“I was jumping up and down celebrating with all of my teammates and saying congratulations all around,” Mollenkamp said. “It felt amazing because it was the first win for McMurtry in a Beer Bike or a run.”

McMurtry hosted its first-ever victory party in the evening following the race, spraying champagne in a fourth floor hallway to celebrate the men’s team. Mollenkamp said he hopes the first-place finish will motivate future McMurtry teams to repeat this year’s success.

“I think it gives a lot of hope and confidence to all of the McMurtry racers,” Mollenkamp said. “Next year and onwards, it’s no longer a dream that you can’t accomplish. It shows McMurtry can win a Beer Bike too.”

Men’s team captains are organizing “Pizza Bike,” a make-up men’s bike race, for Saturday, April 6 at 7 p.m. The event will feature eight bikers from as many colleges as want to attend, with no chuggers and optional pit crew. Yarinsky said the event will offer a bit of redemption for the bikers that didn’t get to race in the official Beer Bike event.

“It’s a way for people who have done the training to get their dues,” Yarinsky said. “I don’t think it provides a definitive result for what would’ve happened on Beer Bike … It would just be fun to get a race in.”