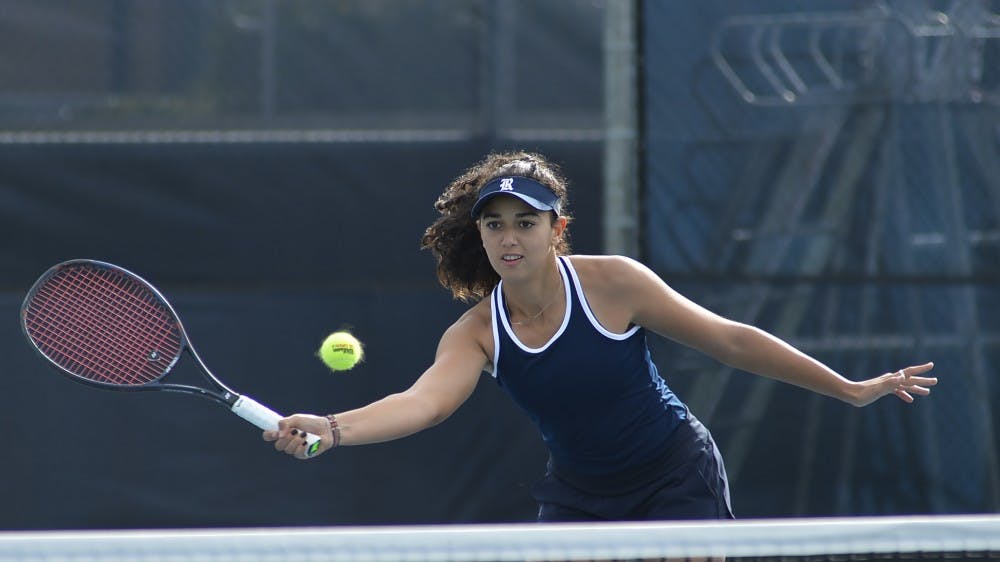 Freshman tennis player Diae El Jardi began playing tennis at the age of six with her father on the clay courts in Meknes, Morocco. According to El Jardi, the rigors of daily practice fostered a bonding with her father.

“My dad used to take me to the club when I was way younger and I would watch him play tennis,” El Jardi said. “He was the one who first taught me how to play tennis and he was my coach until I was 12 years old.”

According to El Jardi, her desire to play against elite competition at an early age forced her and her family to move to Casablanca, where she played in competitive tournaments until the age of 14.

“We had to move so I could practice more and learn from better coaches,” El Jardi said. “I didn’t go to a high school. I studied online so I could travel all around the world so I could play in professional tournaments.”

During her time as an international player, El Jardi established an impressive resume as she not only rose to No. 38 in the world in the International Tennis Federation junior rankings.

She also represented Morocco twice at the Fed Cup where she posted a 2-7 record in her two appearances. El Jardi said it was an honor to represent her country at the Fed Cup.

“It meant a lot to me because playing for my country was a very beautiful feeling,” El Jardi said. “I really love it.”

According to the ITF’s website, El Jardi is 74-57 in singles and 71-51 in doubles during her professional career.

For two years, El Jardi competed as a member of the ITF/Grand Slam Development Fund team, which provides players with the opportunity to take part in top international competition as well as gain invaluable experience traveling abroad as part of a team under the guidance of an ITF coach.

When she came to Rice this January, El Jardi said she struggled to balance athletics and academics. And since she was recruited in the spring, El Jardi said she missed out on opportunity to fully integrate herself on campus. She did not get a chance to participate in Orientation Week, normally a requirement of all incoming Rice students.

“I’m gonna be honest, [Rice] wasn’t how I expected it at the beginning,” El Jardi said. “But my transition was pretty good. I got used to it pretty quickly, so I’m happy about it.”

According to El Jardi, when she feels overwhelmed, she goes beyond the hedges.

“I found a way to organize my time,” El Jardi said. “Usually if I feel a need to relax, I’ll go for a walk with my friends or go off campus for dinner or maybe just relax in the [Hanszen College] quad. When I was back home, I used to go surfing, but now I don’t have the time.”

But on the court, El Jardi has demonstrated success. She is 4-4 in singles play during dual matches and 4-2 in doubles matches. El Jardi has already played doubles with every player on the roster except senior Fernanda Astete. According to El Jardi, she is comfortable switching doubles partners.

“We [each] practice with a lot of girls,” El Jardi said. “So I’m kind of used to playing with everyone else on the team.”

Moving forward, El Jardi said her goals are to continue to develop her game against collegiate opponents and establish a rapport with her teammates before Rice hosts the Conference USA Championships.