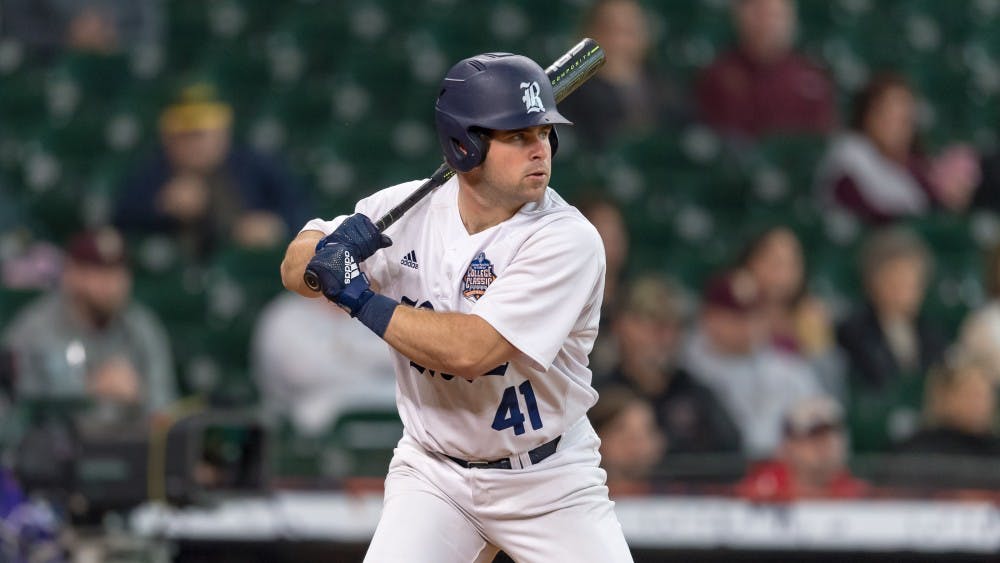 Twenty-four year old senior Andrew Dunlap inherited his middle name, Bellows, from his grandfather. As a husband, father and designated hitter for the Rice baseball team, Dunlap said he isn’t quite the vocal leader his middle name would suggest.

“Nobody cares how old you are when you’re out on the field,” Dunlap said. “I’m just one of the guys. I wouldn’t say I’m quiet, but I do have to make a conscious effort to make a statement in the dugout.”

Dunlap arrived at Rice in 2014 as a pitcher, bypassing an opportunity to play minor league baseball. But during his freshman year, Dunlap tore his rotator cuff and was forced to medically redshirt. According to Dunlap, his throwing arm was never the same, even after arthroscopic surgery.

“I hurt my shoulder the summer going into freshman year and rehabbed for two years, which is why I got redshirts my first two years — one medical and one regular,” Dunlap said. “I actually ended up quitting the team because of my shoulder.”

But he said a conversation with then-head coach Wayne Graham convinced him to return to the team in 2016, this time as a hitter instead.

To transition from pitching to hitting, Dunlap said he wore an elastic band around his waist during batting practice to increase torque and improve his swing’s launch angle.

“This is like talking about religion right here,” Dunlap said. “Guys have always known production happens when you hit the ball hard in the air. That’s where your money is made.”

He didn’t succeed immediately as a hitter, however. Dunlap hit for only a .197 batting average in his first season at the plate. He said he grew frustrated at striking out, and when he only played offense as a designated hitter, he struggled to develop consistency.

“I hate talking about my stats, but I hit better when I’m [playing defense], traditionally,” Dunlap said. “Designated hitting can be tough. If you don’t have some good at bats to start the game, it’s easy to get down on yourself. You have to forget about your [bad] at-bats [as a DH] just like you would when you go play defense. It’s like flushing the toilet.”

According to Dunlap, accumulating plate appearances over a season can settle a hitter into a comfort zone. Dunlap said he suffered from lingering shoulder issues during his first three seasons, which stunted his growth as a hitter due to missed playing time.

This season, however, Dunlap has already started in 28 games. In 112 at-bats, Dunlap has hit 10 home runs, reached base 46.8% of the time and batted in 42 runs. His 1.156 OPS ranks No. 36 in the country at time of publication, according to D1 Baseball.com. Dunlap said he can attribute his success to his momentum.

“This year it is nice to be in the lineup every day,” Dunlap said. “You have to learn how to take care of yourself. I’ve had some minor injuries this year, but [head] coach [Matt] Bragga does a good job of keeping us in the weight room two or three times a week to stay as fresh as possible.”

Plate discipline is one area where Dunlap said he can improve.

“I strike out too much,” Dunlap said. “[If] you walk, you get guys on base for free, you run the pitch count up, get the star [pitchers] out and get the worse pitchers out there.”

As the longest-tenured athlete at Rice, Dunlap said he is simply satisfying expectations.

“You would think after six years of doing something you would get decent at it, hopefully,” Dunlap said.