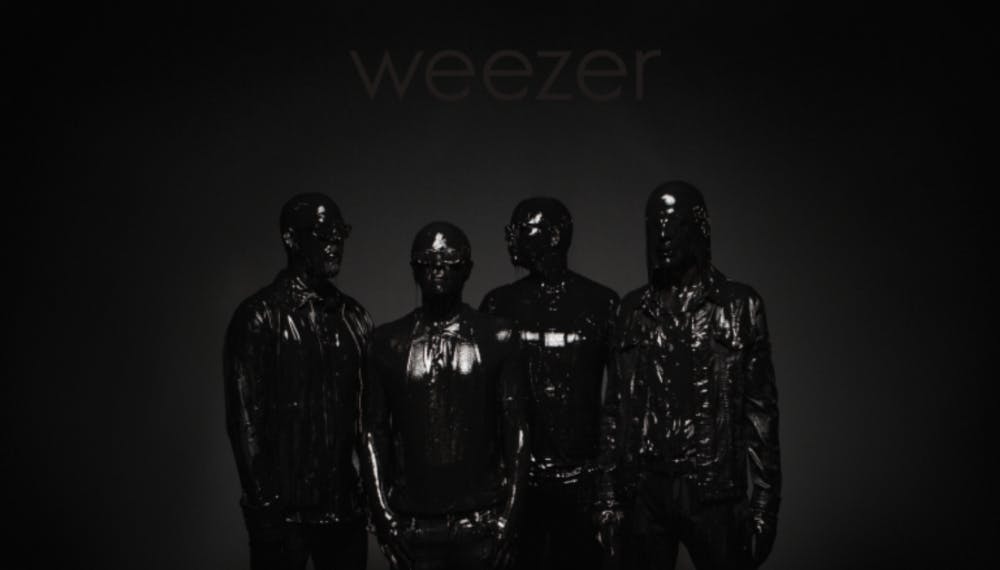 Weezer is officially “back in black;” Weezer (Black Album) is the rock band’s long-awaited 13th studio album and sixth eponymous, color-coded album. Around the release of Weezer’s 2016 White Album, lead vocalist Rivers Cuomo hinted at a Black Album with a darker vibe and potential foray into swearing (Weezer’s had relatively clean lyrics in its 25 years, but Cuomo let loose this time).

Weezer’s first album Weezer (aka the Blue Album) arguably helped define ’90s rock, after which the band has had many hits and misses through experimentation. This album embodies that experimentation, with its songs ranging from catchy to so-bad-you-just-can’t-listen-to-it-all. Fans will have the lyrics “California snow, never let me go” stuck in their heads, and will forever regret giving “Byzantine” a listen. “Can’t Knock the Hustle” sets the tone with a story of a worker trapped in the rat race just trying to make life bearable — a worthwhile comparison to Weezer’s honest attempts at trying to see which musical styles work. Its opening riff of “Hasta luego” offers a nod to hardcore Pinkerton fans, as it’s reminiscent of the opening to “El Scorcho,” the song on the band’s iconic 1996 album with the most Spotify listens.

All in all, on first pass, the album is unmemorable except for “I’m Just Being Honest,” probably the best track on the album. Weezer seems to mock the way their fans criticize them: “You slipped me your CD ... I listened to it, but halfway through it / I had to quit, your band sounds like shit.” Weezer long ago embraced that its fans are diverse enough that they can’t all be pleased, and here they’re forging their own path.

A second listen allows these tracks to also be recognized: “Can’t Knock the Hustle” and “California Snow,” with its entrancing high-pitch synthesizer arpeggios, have rhythm and blues elements that make them successful. Sadly, some others don’t hold up. The guitar-plucking in “Zombie Bastards” is too folk-sounding for this rock album, the fast strumming in “Too Many Thoughts In My Head” gives me too many thoughts in my head and “Byzantine” sounds like an awful 8-bit mashup of elevator music. Cuomo is known for pairing well-written lyrics (usually about pursuing girls) with a memorable delivery, causing listeners to smirk as they sing along to nonsensical lyrics. The album’s worst songs have lyrics that are too repetitive and uncreative, and when paired with Cuomo’s characteristic voice, come off as annoying. However, Cuomo shines through in “Living In L.A.” and “The Prince Who Wanted Everything,” letting these tracks stand out as oldschool Weezer. The two join “I’m Just Being Honest” as the best songs of the album, and together are a solid return to form. Fans of the old Weezer should enjoy these three tracks.

The band is a favorite of L.A. natives because of their countless songs centered around Southern California life, “Beverly Hills” being the most famous. This album forms a satisfying trilogy with two other Weezer albums from the past few years, White Album and Pacific Daydream, collectively interspersing a number of references to L.A. and California. The albums grade in tone from White Album’s opener “California Kids” — vibrant, carefree and classic Weezer — to the last song of Black Album, “California Snow.” This track is melancholy and rebellious, with mentions of crucifixion, panic attacks and “me and you against the world.”

A progression through the three albums shows a trend of an increasingly angstier Cuomo, like how Weezer’s poppy debut 1994 Blue Album was followed by the dark, emo Pinkerton. The sophomore album was controversial but still a hit, winning Weezer a whole new sect of fans. It’s worked before, and so Weezer seems to be going through a second cycle of music-making to reinvent themselves again.

Weezer (Black Album) can be found on all major streaming platforms.