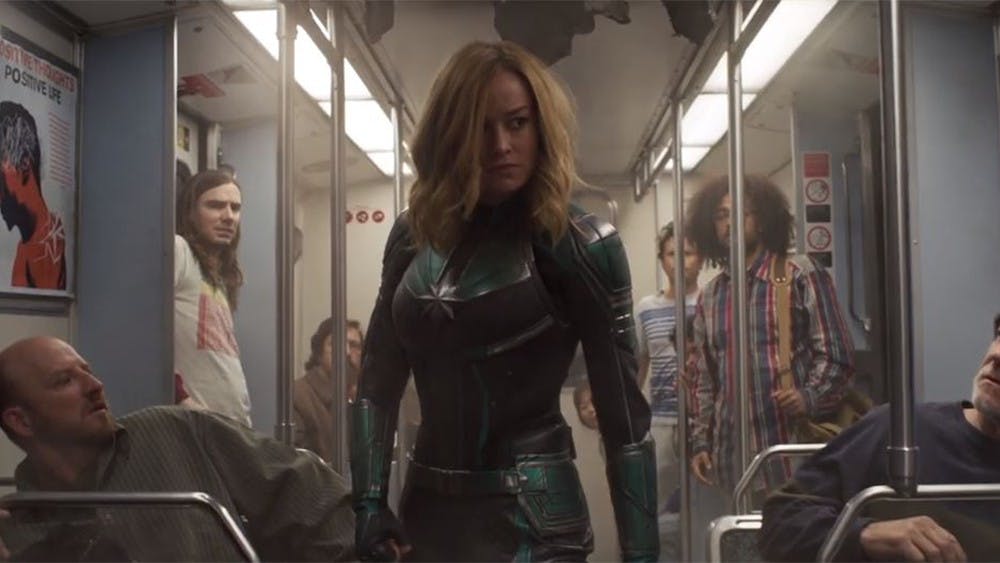 Now the most monetarily successful movie franchise of all time, the Marvel Cinematic Universe has turned characters once known only to hardcore comic book fans into silver screen icons popular all over the world. Still, until now, the 11-year running series had yet to deliver an installment centered entirely on a female superhero. With Captain Marvel, Marvel Studios has produced a film filled with the franchise’s customary action-packed entertainment, now finally focused on a woman’s story: albeit one with major shortcomings regarding its narrative and emotional cohesion.

A powerful Kree warrior with major gaps in her memory, Vers/Carol Danvers (Brie Larson) begins to have visions of a forgotten past on Earth after she escapes the Skrulls’ (shape-shifting aliens) captivity and crash-lands on the planet in the 1990s. There, she encounters S.H.I.E.L.D. agent Nick Fury (Samuel L. Jackson), and the two must ally themselves with each in order to protect the world from alien destruction.

The movie’s strongest element is undoubtedly its sense of humor and fun. The filmmakers know that they are making a comic superhero blockbuster, so they have many scenes that embrace the gaiety of their Marvel compatriots such as the Guardians of the Galaxy and Ant-Man.  Hilarious, witty dialogue defines the relationships between many of the characters, from the standout team of Fury and Vers to the combative connection between Vers and the surprisingly hilarious Skrull leader Talos. Other aspects, like the constant presence of the adorable cat Goose, bring a welcome lightheartedness to the film.

Another standout aspect is the movie’s special effects. Marvel movies have become standard-bearers for cinematic computer-generated images, and this effort is no exception. Alien spaceships and glowing photon blasts become believable through the effort of the visual effects team; however, their greatest accomplishment comes in the digital de-aging of Jackson. As the movie takes place in the mid-90s, Fury should look younger than he does in the Avengers films. So, he is made to look almost exactly like Jackson did during that time period. Complemented by Jackson’s immensely charismatic turn, the de-aging itself becomes an afterthought while watching the movie, the highest praise one can give a special effect.

Nonetheless, the movie does contain some big flaws in its storytelling, specifically concerning Danvers’ character arc. Since she starts the story without memories of her past, the film utilizes flashback sequences to fill in both the audience’s and her own understanding of her character. That being said, these scenes are so short and laden with clichés that they seem more like interspliced deleted scenes than natural additions to the film’s narrative flow. Their curt nature only confuses our comprehension of Danvers as a person, as she does not possess any clear motivations from which to behave. This in turn hinders Larson’s performance, preventing the audience from latching onto a sensible behavioral pattern and thereby properly grasping her narrative journey.

To make up for not properly grounding its protagonist, the film plays with themes like the significance of female friendship, the travails of refugees and female independence from men. The scenes that illustrate these ideas are generally executed well, and they provide a needed emotional resonance to the proceedings.

Overall, Captain Marvel is an enjoyable-enough piece of popcorn entertainment that marks an important milestone for female representation but otherwise proves a run-of-the-mill entry in the cascade of superhero narratives that play in cinemas each year.

Captain Marvel runs 125 minutes in length and is showing in theaters everywhere.