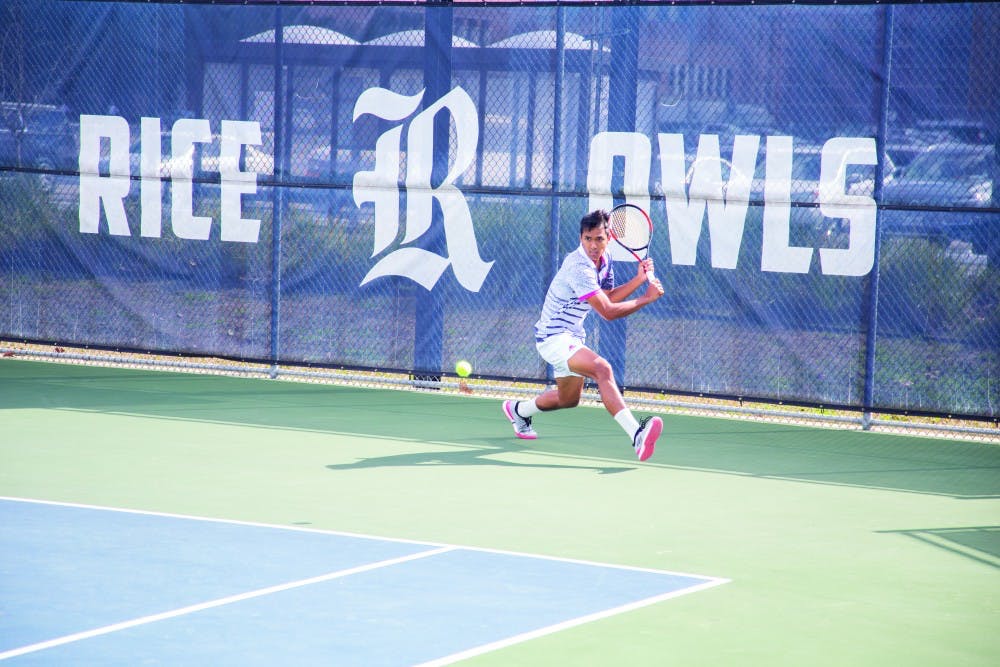 Sophomore tennis player Sumit Sarkar grew up taking the subway to the U.S. Open every year from his home in New York City.

“I’ve been going every year for the past 19 years,” Sarkar said. “My favorite tennis player growing up was Roger Federer [who has won five U.S. Open titles].”

Sarkar said he began playing tennis by emulating Federer’s all-round court game but has grown to favor heavy cross-court balls and offensive baseline play. It’s a strategy that has led him to a great deal of success during his short Rice career.

Recently, Sarkar defeated the No. 4 singles player in the country, University of Texas, Austin’s Christian Sigsgaard, in straight sets. According to Sarkar, his match against Sigsgaard was a confidence-builder.

“Texas was an extremely tough road match for us,” Sarkar said. “At the time we played them, they were No. 3 in the country. We lost a hard-fought doubles point that all of us were very upset about. Going into my singles match, I went down 4-0 in the first set extremely fast, as the doubles loss still lingered in my mind. As the match progressed my confidence grew. I played a strong tiebreak [in the second set] and in the end was able to come out on top.”

In an earlier match this season when Rice lost to Louisiana State University, Sarkar registered the Owls’ lone point in singles. Sarkar is currently on a three-match winning streak in singles, where his record this season is 10-4 in dual matches and 13-6 overall.

Sarkar said he was proud of his straight-set victory over LSU No. 1 Shane Monroe.

“Looking around, I saw that we were down on almost every court so I tried to stay focused on my match,” Sarkar said. “It was a fun match for me to play and one of my better ones this season.”

“I’ve enjoyed playing with them all and each of them brings something different on the doubles court,” Sarkar said. “My current doubles partner, Eric Rutledge, and I are very comfortable with each other and I think we make a very strong team.”

Sarkar came to Rice as part of a recruiting class that included Mohamed Abdel-Aziz, Russell and Eskeland. Abdel-Aziz was born in Newcastle, England and trained in Dubai, United Arab Emirates. Eskeland trained in Oslo, Norway. Sarkar said he believes college tennis recruitment is diffusing into the international sphere.

Last season, all four new recruits played major roles on the team. Russell and Abdel-Aziz tied for Rice’s lead in dual match singles wins and Sarkar finished the season on a six-match winning streak in the Owls’ No. 2 singles spot. According to Sarkar, his class continues to ascend.

“We’re lucky to have a strong foundation of sophomores,” Sarkar said. “Each one of them brings different aspects to the team. [Abdel-Aziz] brings a lot of energy into practice and in matches. [Russell] is athletically gifted and also brings a lot of energy on and off the court. [Eskeland] is a role model for all of us and a professional on and off the court. He is well-respected by all and is a very important asset for us.”

Sarkar said being thrust into competitive matches as a freshman enabled his rise.

“I think the largest growth for me as a player is experience and maturity,” Sarkar said. “I’ve learned better which shots to go for, as well as how to play the important points while being less nervous. This was a bit of a roadblock for me last year — playing the important points correctly. I still have a lot of growth to do as a player and [will] continue improving every day.”