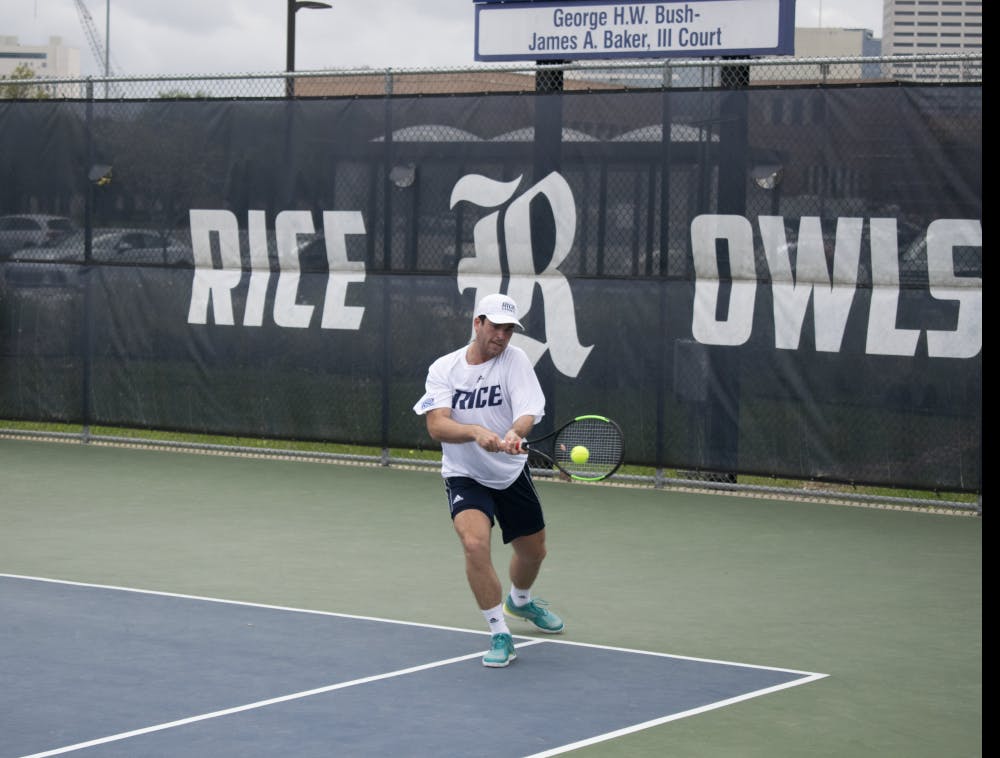 The Rice men’s tennis team fell to Utah State University 4-2 on Sunday night to finish a winless weekend at the 61st Ralph O’Connor Rice Invitational. The loss dropped the Owls to 9-11 on the season and extended their losing streak to four matches. The Owls’ last win was against Southern Methodist University, on March 10.

Rice started off the weekend on a high note against Texas Tech University, with a 6-3 victory in doubles by sophomore Mohamed Abdel-Aziz and freshman Karol Paluch.

However, the Red Raiders picked up a 6-3 win on court two against Rice sophomores Jakob Eskeland and Conrad Russell to tie the doubles point. On court one, Rice’s doubles pair of junior Eric Rutledge and sophomore Sumit Sarkar, currently ranked No. 39 in the nation, found themselves tied 5-5 against Texas Tech’s No. 7-ranked duo of Bjorn Thomson and Parker Wynn. Texas Tech broke to serve for the match, but Rice responded by forcing a tiebreaker.

Head coach Efe Ustundag said he was impressed with the doubles pair maintaining its energy in the tiebreaker.

“We really kept it up throughout the tiebreak and put ourselves in a situation where we [could win],” Ustundag said.

The Owls could not close the deficit in singles play. Sarkar won his fourth straight match with a straight-set win to improve his record to 11-4, but Texas Tech earned singles wins at courts two, four and five to close out the match. Thus, Rutledge and freshman Adam Oscislawski did not finish their matches.

After the match, Ustundag said pride and perseverance would be necessary for Rice to level its invitational record.

“It has to be about desire and not wanting to quit,” Ustundag said.

The Owls’ first opportunity to rebound was on Sunday in a match against Dartmouth College. Dartmouth entered the match with a 2-0 record on the weekend.

Rice pushed the pace early by winning four of its six first singles sets. However, the Big Green responded by winning the second set in three of those four matches, and eventually defeated the Owls in two of them.

In singles play, Dartmouth won the first two completed matches with victories against Abdel-Aziz and Oscislawski. Rice picked up a win when Sarkar claimed his third consecutive victory over a ranked opponent by defeating Dartmouth’s No. 34-ranked Charlie Broom (6-4, 7-6). But the Big Green still secured the team victory to clinch the Rice Invitational title.

The Owls responded to Sunday morning’s loss by winning the doubles point against Utah State to open the match. Sarkar and Oscislawski won their doubles match 6-0, and the doubles pair of Abdel-Aziz and Paluch followed by claiming their match 6-3.

In singles play, the Owls split the opening sets of the six matches. However, the Aggies responded by winning five of the six second sets to take a 3-2 lead and send two matches to a deciding third set. The Aggies closed out the Owls with a win on court four to earn a 4-2 victory over Rice.

The Owls are next in action on Saturday, March 30 when they travel to Beaumont to take on Lamar University.