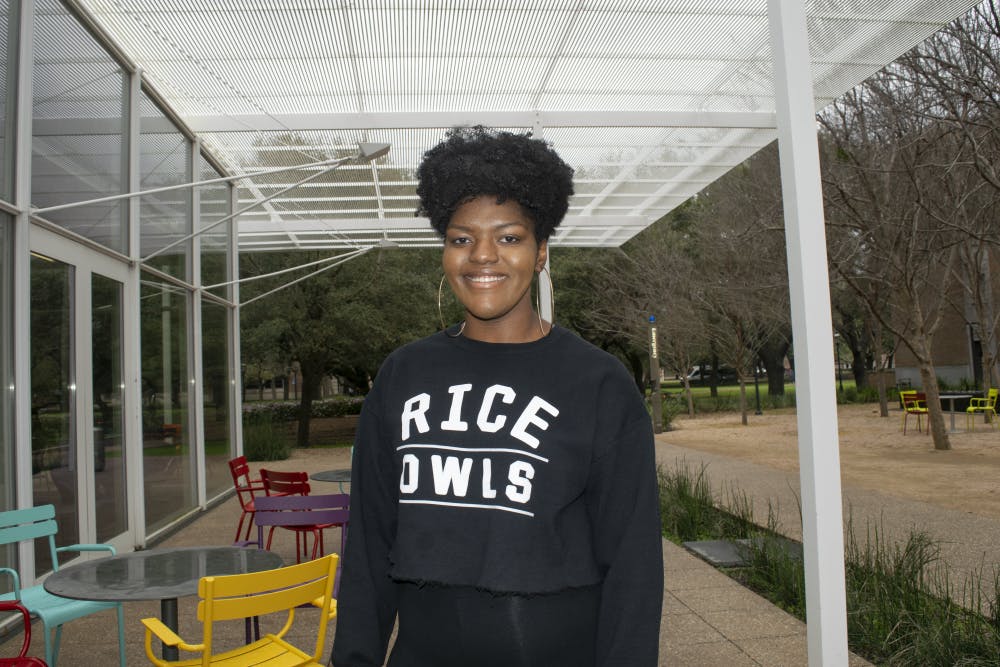 For most of her life, Summar McGee didn’t envision herself attending a school like Rice.

“I always joke that I still don’t know how I got here,” McGee, a junior at Hanszen College, said.

McGee is from a town called Edwards, located in the Mississippi Delta. The region is one of the most economically impoverished in the country, but it’s also an area rich with culture — the Delta is one of the most prominent origins of blues, jazz, soul food and other aspects of Black culture.

“People are surprised that when I talk about Mississippi, I have overwhelming pride in where I’m from,” McGee said. “But there’s duality in my home that I feel like a lot of people don’t understand.”

McGee loves her community more than anything. But she said that growing up, she was very aware of the challenges her state faced.

“You don’t not notice that [your state is] 50th in education,” McGee said.

During her sophomore year of high school, McGee was admitted to the Mississippi School for Mathematics and Science — a boarding school for academically gifted high school juniors and seniors — and moved three hours away from Edwards to Columbus, Mississippi to complete her last two years of high school there.

“I still say that’s one of the best choices I’ve ever made, because it opened my life up to a lot of opportunities and experiences,” McGee said.

That’s not because she wouldn’t have been qualified for such experiences, McGee said. But she would never have applied to elite universities like Rice, would not have known how the application process worked or how she stacked up against the rest of the country had it not been for the encouragement she received from teachers at that school, she said.

Moving from Columbus — population 24,041 — to Houston was a huge change for McGee. She said adapting to Rice’s culture is continuously difficult.

“I’ve had a lot of experiences at Rice where it’s palpable in what ways I am out of place,” she said. “If I were to go into a servery and eat things the way that I was taught to eat certain dishes, people would look at me like my head had fallen off my body and rolled across the servery. But, why should you be ashamed of who you are and where you come from, and the mannerisms and customs that you have, right?”

At Rice, McGee is pursuing a degree in sociology. She is president of the Black Student Association, a member of Rice’s speech and debate team, a Mellon Mays Undergraduate Research Fellow, a co-founder of the Rice Islamophobia Resistance Campaign, and a contributor to TEDxRiceU and R2: The Rice Review.

In all she pursues, McGee said she looks for ways to connect it back to her community.

In her classes, McGee said she’s often felt the undue burden of having to carry conversations about race and ethnicity forward, of having to explain racial concepts to her peers. Along with that, she feels like people often perceive her as combative and aggressive — they act differently around her.

“I am saliently Black in the way that I look. I have very dark skin, I have very coarse hair, I have a very deep voice. Everything that you would think of when you think Black, I am that,” she said. “It literally behooves me that me engaging, me speaking to people, me being my whole self, me using the mannerisms that are natural to me, me using the intonnations that are natural to me, is offensive, and makes you defensive.”

Informed by those experiences, McGee has made it a priority of the BSA to create spaces where Black students can exist without constantly compromising who they are to make others more comfortable.

“My goal [in becoming BSA president] was to create a space within Rice where somebody like myself would have somewhere that reminded them of home,” she said. “Somewhere where they can put down that third wall and stop existing with two consciousnesses.”

McGee said she’s done this partially through forming relationships with students like her — students from similar regional, cultural and socioeconomic backgrounds.

“I can steer them towards a community, I can steer them towards resources, I can give them insights and let them know that they’re not alone in that experience,” she said. “You can’t fix it, which is one of the most heartbreaking things — to have a freshman who is like you talk to you about these experiences and these struggles that you remember so saliently, and not be able to fix it.”

For McGee, knowing people have also experienced isolation and discouragement is really important, and she said Black faculty at Rice have been instrumental in that knowledge. She estimates that Black professors like Alexander Byrd, Roland Smith and Tony Brown do two to three times the work of a regular professor.

“And why do I say that? It’s because of the responsibility they have to Black students that other professors don’t have. It’s cultural weight that they have to carry simply by being Black,” McGee said. “And obviously if they work at Rice, they’ve been in spaces like this on the other end as students. So they understand what it’s like to struggle through your Harvards, through your Rices, through your Vanderbilts, as a Black person.”

Every now and again, McGee said a non-Black professor, such as Douglas Schuler, Yehuda Sharim or Robert Werth, will carry this responsibility as well.

One faculty member who has been a major support system for McGee is Shannon LaBove, assistant director of the speech and debate team. McGee said that LaBove, who is a native Houstonian, was one of the first Black faces she saw at Rice. When McGee mentioned she missed Mississippi food, LaBove brought her cornbread. Last year, when McGee fainted at three in the morning and fell down a flight of stairs, LaBove took her to the hospital.

Where McGee comes from, community is extremely important. Although she’s found Rice to have a generally individualistic culture, she said LaBove and the speech and debate team have given her a family. They’ve also given her a platform to speak about issues on which she sometimes feels silenced in other spaces.

“I’ve been able to use speech and debate as a way to reclaim my voice,” she said.

In addition to speech and debate, McGee said that the never ending support she receives from her community keeps her going in the face of the challenges Rice presents her. Often when she goes home, she said, people she doesn’t know tell her they’re proud of her. People ask McGee to talk to their nieces, their sons, their granddaughters — to show them what they’re capable of.

Although she doesn’t think it’ll happen anytime soon, McGee hopes that one day, there will be more than one unspoken definition of what a Rice student is.

To McGee, that mentality stifles diversity. She said she wants to see people bring their entire experiences to Rice, rather than mold themselves to fit a predetermined one.

“I don’t want to check Summar from rural Mississippi at the door. That’s who I am,” McGee said. “I want to be able to bring that into this space and help create what it means to be a Rice student.”

This story has been updated 3/26 with further information.

Editor’s Note: Black at Rice is a features project intended to highlight and celebrate black voices on and off campus. Have someone in mind? Nominate them here.