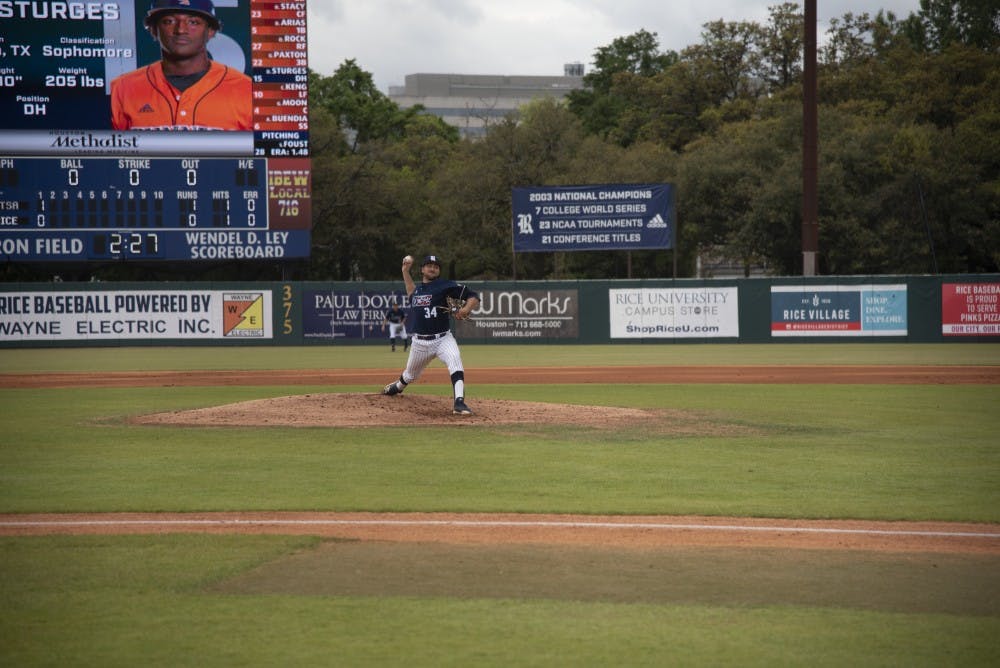 Rice baseball dropped two out of three games to the University of Texas, San Antonio in its first home conference series of the year, falling to 9-17 on the season and 1-5 in Conference USA play.

Through 23 games, Rice baseball’s 2019 team was a spitting image of the 2018 team. Only one win differentiated its record between this year and last year. Both teams had recently lost to a ranked Texas A&M University squad. Both teams were set to begin their first home C-USA series. And both teams were about to entrust Matt Canterino to make a pivotal start on the mound.

Last season, as a sophomore, Canterino carried a no-hitter into the eighth inning against Western Kentucky University to help Rice earn a 4-0 win.

But against UTSA on Friday, Canterino, now a junior, couldn’t recreate his magic. He pitched a shutout through six innings, but Roadrunners ace Karan Patel matched him stride-for-stride. When Canterino’s shield cracked in the seventh inning, UTSA pounced, tallying three runs from two triples, a sacrifice bunt and a wild pitch.

When the Owls were unable to muster any more runs in the 4-2 defeat, Canterino was tagged with his fourth loss of the season. Canterino has only one win this year despite being ranked No. 39 nationally in walks and hits per inning pitched.

Rice head coach Matt Bragga said if his team could have produced more timely hitting, it would have won the series opener.

“It’s one of those things where we are not getting the big hits, the clutch hits, so to say,” Bragga said. “Even with zero or one outs and with runners in scoring position, we have been leaving them out there.”

Saturday’s game was not quite a pitcher’s duel. UTSA scored in the first inning on a wild pitch by Owls senior Jackson Parthasarthy and added three more runs in the second. Parthasarthy was then replaced by sophomore Addison Moss, but UTSA scored four runs on him, too. By the time Dunlap launched his team-leading sixth home run for Rice in the bottom of the fourth, the Owls were already seven runs down. In the end, Rice fell 9-3.

According to Bragga, Rice’s top-shelf pitchers need to get deeper into games.

“We are a team that needs to be built around our starting pitching,” Bragga said. “If they do well, it gives us an opportunity. If they don’t, we’re not as good. When you have good starters and a good bullpen and you’re offensively sound and defensively sound, consistency happens.”

Bragga said one positive from Saturday’s loss was the 18-inning stretch of error-free baseball — the first of its kind for Rice this season.

“If you go back and look at numbers for all the games ... there is a considerable difference in our fielding percentage,” Bragga said. “It was something that needed to be addressed heavily, and we have addressed it heavily. By no means is it perfect. But it has improved and it will continue to improve.”

Still, the loss mired Rice in a seven-game losing streak, the program’s longest since 2017. With Wayne Graham at the helm, the Owls never lost eight in a row. According to Bragga, the series finale was a critical litmus test for Rice’s season.

“[It’s] about as much of a must-win as it could be six games into the conference season,” Bragga said.

Senior Evan Kravetz took the mound for Sunday’s game, pitching 4.1 innings and allowing three runs before being replaced by senior Kendal Jefferies. In the bottom of the third inning, Rice tallied its first three-run frame of the weekend. Edwards broke the tie in the fifth inning with an RBI single. In the sixth, junior Braden Comeaux drew a bases-loaded walk to bring home another run.

Rice went up 8-3 when it tallied three runs in the seventh inning. But after Jefferies let in  two runs in the eighth inning, Bragga made the switch to junior Garrett Gayle. With his first save opportunity of the season, Gayle delivered and the Owls won 8-6.

Bragga said he enjoyed watching his players deliver when it mattered most.

“Our guys needed a win,” Bragga said. “We all did. Even I needed a win as a coach. When you lose seven in a row, anytime you can break that and get a win, it’s a good [feeling]. I am proud of our guys.”

The Owls’ Tuesday night game against Texas State University was ongoing at time of print.