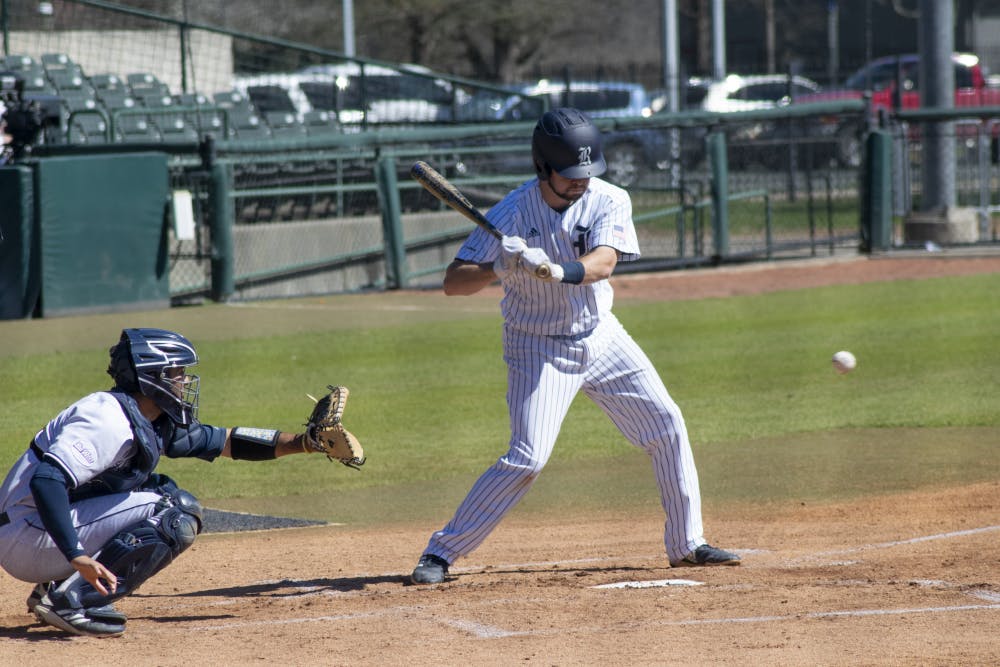 Rice baseball ended its five-game losing streak against ranked opponents and bounced back from a loss on Friday to Texas State University by defeating No. 15 Baylor University and No. 19 Texas Christian University (DI Baseball) in the annual Shriners Hospitals for Children College Classic held at Minute Maid Park.

On Sunday afternoon, Texas A&M University defeated the University of Houston to clinch the Aggies’ 3-0 record in the six-team, Texas-only tournament. With A&M’s win, the Owls were denied the opportunity of winning their fourth College Classic title.

But Rice head coach Matt Bragga said his team’s run-rule demolition of TCU in the final game of the tournament, 12-2 in seven innings, provides a stepping stone for growth.

“After Friday, these guys knew they had to be better and this wasn’t good enough,” Bragga said. “We are not there [yet], but it’s a step in the right direction. But [now] we are playing with a sense of urgency.”

Neither team could muster a run until the seventh inning of Rice’s loss to Texas State, when the Bobcats pushed across an unearned run that would eventually win the game. Bobcats junior Nicholas Fraze, who was named Most Outstanding Player of the tournament, matched Owls junior Matt Canterino over seven innings and bested Rice’s ace in strikeouts, 12-9. Canterino’s season record dropped to 0-2 in three starts despite conceding only four earned runs in 18 innings pitched. According to Bragga, Rice’s key area for improvement is plate discipline.

“If you play that way, you aren’t going to beat anybody,” Bragga said.
The Owls started senior pitcher Evan Kravetz on the mound for Saturday afternoon’s clash against the Baylor Bears. Kravetz delivered, tossing nine strikeouts and surrendering only three runs.

“[Our batters] had better approaches and did a better job,” Bragga said. “They laid off pitches they couldn’t swing at which put them in a better spot.”

For its final game in the College Classic against TCU, Rice donned pinstriped white pants to compliment their sharp navy jerseys, which displayed a woven American flag across the letters R-I-C-E sprawled on the chestplate and a Shriners insignia patch on the lapel.
Senior Owls pitchers Jackson Parthasarathy and Jackson Tyner stole the show from the Horned Frogs. Parthasarathy and Tyner combined to toss eight strikeouts and allow only two runs, one of which was earned, in the seven inning game.

According to Bragga, the pitching trio of Canterino, Kravetz and Parthasarathy forms a trustworthy rotation which allows him to reserve junior hard-thrower Addison Moss for late-innings work.

“The bottom line is that our pitching has been good all year but our hitting has been better tonight,” Bragga said. “By the third or fourth inning I was like, ‘Uh, should we or should we not [replace Parthsarathy]?’ but [assistant] coach [Cory] Barton said we should stay with him. All I [have seen] of Jack has been really good. His fall was good, his spring was good and he has been phenomenal since we put him in the rotation. He is really throwing some nice pitches.”
According to Bragga, sophomore catcher Justin Collins, who played behind the plate all three games and went 2-for-3 against TCU, is proving himself as a worthy backstop.

“[Collins] has been good up to this point but this weekend he has been great,” Bragga said. “Bouncing on balls, blocking balls and working with breaking balls that he was pouncing on, he was phenomenal. Leading our team and showing an energy, leading our guys in the dugouts, that’s contagious.”