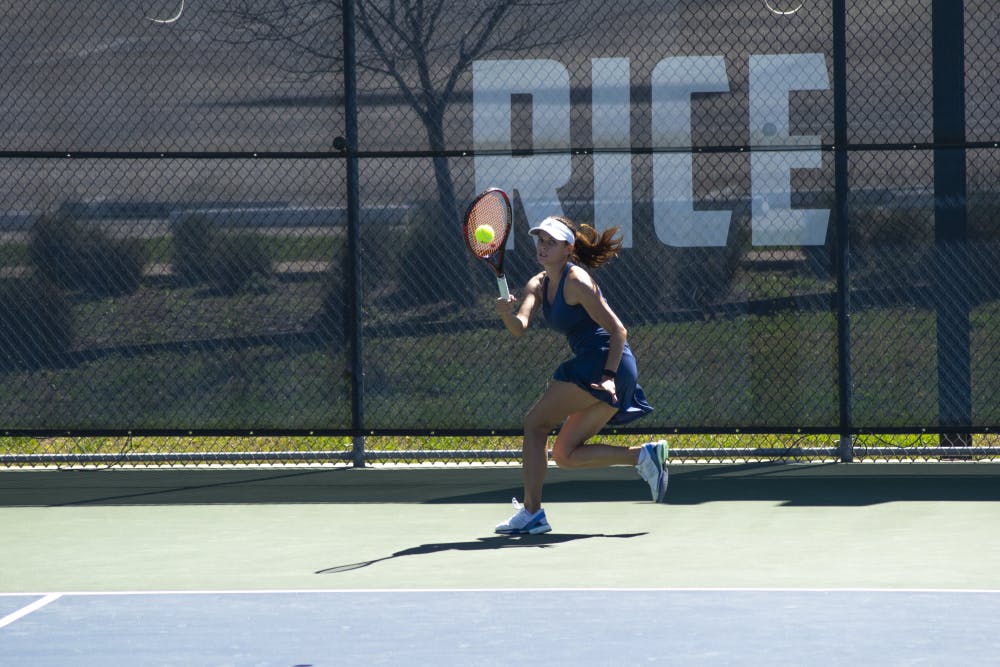 The Owls wasted little time in snatching the doubles point from UT Arlington in their match against the Mavericks. Sophomore Anna Bowtell and freshman Victoria Smirnova finished their match first with a 6-2 win, followed shortly by a victory on court two by junior Priya Niezgoda and freshman Anastasia Smirnova to clinch the 1-0 advantage.

“They’ve played together as a unit and had really good positive energy out there,” Schmidt said.

The Owls carried the momentum from the doubles point into singles play. Rice raced to first-set wins on all six singles courts. Freshman Victoria Smirnova was the first to finish with a win. She was followed shortly after by her twin sister Anastasia, who won her second set 6-1 to complete the victory and put the Owls ahead 3-0. Sophomore Anna Bowtell finished the sweep over the Mavericks with a victory in her match to clinch the 4-0 win. Bowtell’s clinch prevented sophomore Michaela Haet, Niezgoda, and sophomore Linda Huang from finishing their matches, though the Owls were ahead in all three of the unfinished matches.

Schmidt said she was impressed with the improvement the team made on Saturday as a whole compared to the previous match, a loss to No. 12 University of Kansas.

“We took a step forward and that is what we’re always looking to do,” Schmidt said.

According to Schmidt, the team’s clean approach helped to carry it to victory.

However, Schmidt’s comments on Saturday about the team taking a step forward did not apply to singles play in Sunday’s match against Texas. The Longhorns entered Sunday ranked No. 7 in the Tennis Channel/USTA media poll and No. 9 in the Oracle/ITA rankings. Rice continued its success in doubles play on Sunday by winning two of the three doubles matches, with the pair of Anastasia Smirnova and Niezgoda claiming their doubles match by a score of 6-2. However, Texas raced out to win all six first singles sets. The Longhorns proceeded to grab three matches in straight sets to take a 3-1 lead. However, Rice bounced back to force third sets on three courts. If the Owls had won all three of the matches that went to three sets, they would have won the match. However, they did not complete the comeback, losing in every match that went to a third and final set.

After the 6-1 loss against the top-10 ranked Longhorns, the Owls will look to rewrite the script against a No. 40-ranked University of Denver team. The Owls face the Pioneers on Friday at 1 p.m. at the George R. Brown Tennis Center.