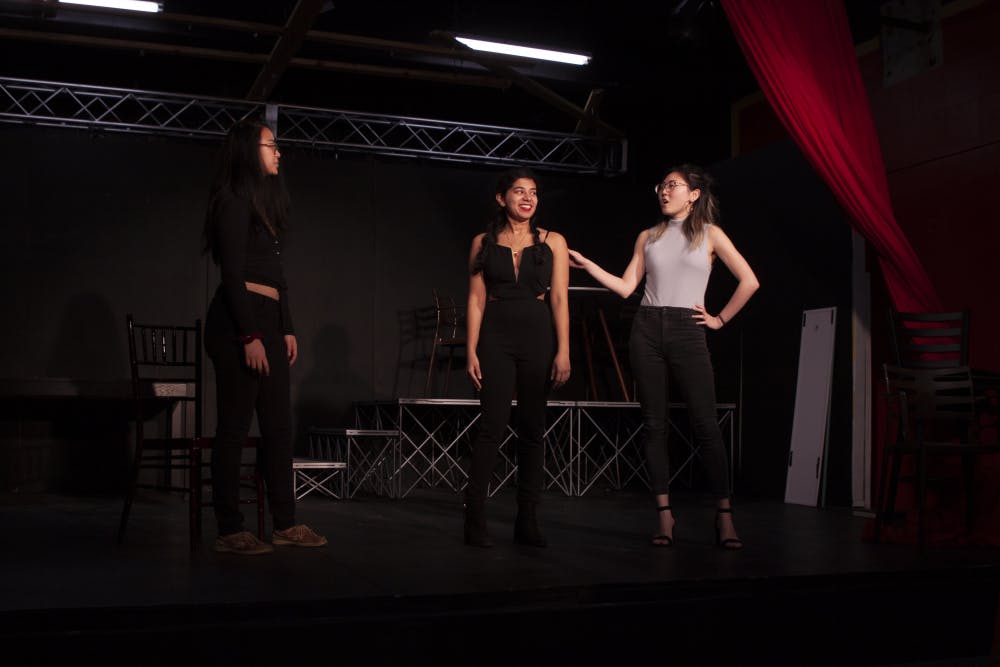 “We want you to question us.” The second paragraph of this year’s Vagina Monologues program begins with this bold statement, reflecting a sentiment of critical reflection carried throughout the show.

According to directors Ishani Desai, Kaarthika Thakker and Mandy Quan, The Vagina Monologues: Rice’s Critical Approach 2019 seeks to acknowledge and discuss the shortcomings of the historic collection.

The Vagina Monologues, originally written by Eve Ensler in 1996, are a collection of monologues centered on the female experience that address the stigmas around discussing female anatomy. The show will include 16 performances with an intermission filled by student critiques of the show.

“[The monologues are] important because they were radical at the time and became part of this Western feminist canon,” Thakker, a Lovett College junior, said. “I think it’s important to acknowledge that, and acknowledge why, and look at that piece and think, ‘What problems did it have?’”

The three directors had to decide whether to host the monologues in the first place, eventually deciding that they wanted to acknowledge the historical context of the monologues and their radical effect.

“I still think it’s pretty revolutionary to talk about your vagina in such an open and honest way, in front of a large group of people,” Desai, a Lovett senior, said. “Even though [the monologues are] not perfect and there are a lot of flaws, we still found value in that it was a space for us to start these discussions and be able to talk about our vaginas openly.”

While the monologues have previously been critiqued in a Thresher op-ed for not being inclusive of transgender women, the directors began thinking about the flaws of the monologues during their collective participation two years ago. In addition to critical performances during the intermission, the directors also chose to change the performance style of “They Beat the Girl Out of My Boy,” the only monologue about the trans experience. The program that viewers will receive contains a disclaimer about the show, asking viewers to remain vigilant in their evaluation of the performance. These changes are an attempt to compromise between the historical importance of The Vagina Monologues and their failure to include every kind of woman.

“If [the monologues are] going to happen, then it needs to happen in a more productive manner, and it can’t happen in the way it always has been,” Quan, a Will Rice College junior, said. “We were excited to participate in a project where we could make the edits [that] we felt were necessary and make the feminist strand within The Vagina Monologues less mainstream [and] white, and include more intersectional aspects.”

Chloe Wilson, co-director of the Rice Women’s Resource Center, said that The Vagina Monologues help Rice students acknowledge the stigma around female anatomy while also spurring conversations about what it means to be a woman. She will perform “My Short Skirt.”

“It’s easy for people who feel proud about their bodies, or proud to call themselves feminists, to say ‘Oh yeah! Everyone at Rice, we’re all on the same page,’” Wilson, a Lovett senior, said. “But I realized that we all come from different backgrounds [so] we all get here with different levels of understanding of self, womanhood and gender issues.”

Wilson said that while the RWRC provides a physical space for resources and help, it also serves as a community for these conversations.

“My own views have been challenged in that space,” Wilson said. “We’re all growing in that community of feminists.”

The show itself, which has a cast and crew of 28, includes a diversity of experiences and motivations. Ileana Martinez, who will study abroad in Japan after the monologues, said that her participation shows how she’s overcome her feelings of stigma.

As a result, Martinez did not attend the show until her sophomore year, when she became interested in performing. She performed last year and will perform the last monologue, “My Revolution,” this year.

“I realized that, by the end of the two hours, the word ‘vagina’ came naturally to me like any other word,” Martinez said. “I feel like that’s the effect that it has on a lot of first-time attendees.”

90 percent of all proceeds will go to the Houston Area Women’s Center, a women’s shelter dedicated to helping domestic and sexual violence survivors. Liseth Perez-Sanchez, who will perform the monologue “I Was There in the Room,” is currently working with HAWC for her capstone project.

“When I found out that they were going to donate 90 percent of the donations to a local organization, I was very excited and was like ‘Let me try to put [them] in the organization that I’m working with,’” Perez-Sanchez, a Martel College senior, said.

Perez-Sanchez will perform for the first time in the monologues after watching them her freshman year.

“I did find problems with it, especially when the Thresher op-ed came out,” Perez-Sanchez said. “I really liked how this year, they were taking a critical approach. I was so nervous to try out and I was like ‘Liseth, this is your senior year. You have to do it.’”

The Vagina Monologues will be hosted in the Sid Richardson College Basement Big Room  on Feb. 21, Feb. 22 and Feb. 23 at 7 p.m. Tickets are $5 and can be bought by Venmoing @VagMo19 or paying cash. All proceeds will be donated to HAWC and the V-Day Campaign.