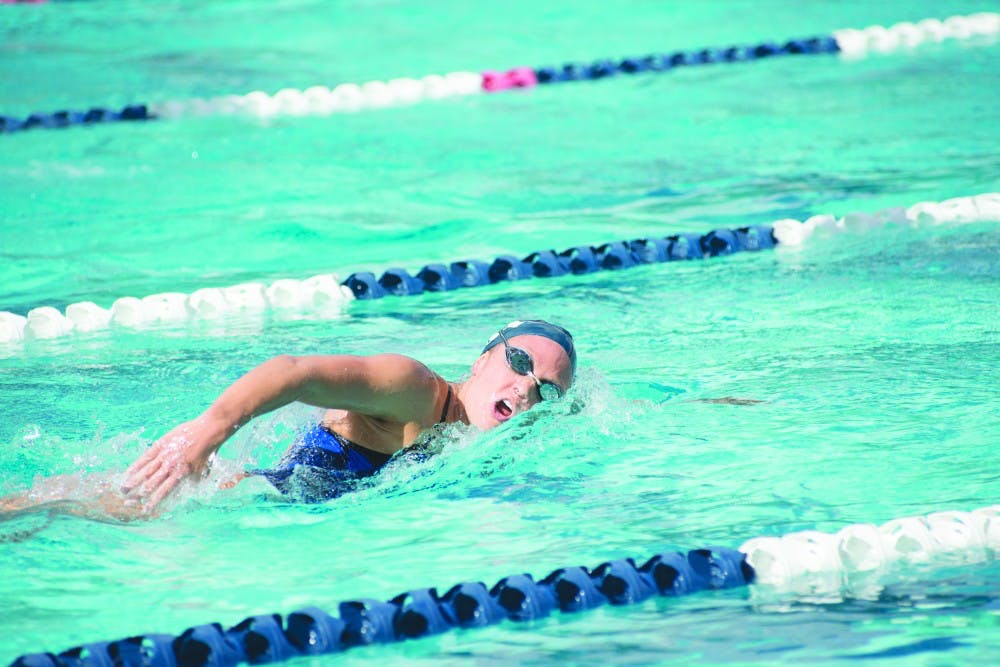 With the conference championships right around the corner, the Rice swim team is rounding into form.

On Saturday, five Rice swimmers earned season-best times in the University of Houston First Chance Meet. Sophomores Lindsay Mathys and Hannah Sumbera and Ellery Parish swam season-bests in the 100-yard freestyle, junior Claire Therien and senior Sydney Franzen did the same in the 200-yard freestyle and sophomore Lindsay Mathys added one more in the 100-yard butterfly. The Owls’ quartet of freshman Harper Gillentine, freshman Becca Evans, senior Marie-Claire Schillinger and freshman Marta Cano-Minarro also posted a season-best time in the 200-yard freestyle relay. The meet did not feature team points as a result of emphasis on individual preparation for the upcoming conference meets. According to head coach Seth Huston, this unique structure relaxed Rice’s swimmers.

“We are in the championship season for sure right now,” Huston said. “A lot of teams are rested and are in a window of peak performance, and the [match at UH] was at the front of end of it. We aren’t thinking too much about it, no pressure, just get up and go. We are focusing on timing our kick counts, our stroke counts and getting off the wall. Our swimmers are starting to get their legs under them and get a little more power.”

Next, Rice ventures to the Olympic Natatorium at Georgia Tech University in Atlanta, Georgia to compete in the Conference USA Championships, where the Owls have an opportunity to qualify swimmers to the NCAA Championships in both team and individual races. Preliminary events will take place from Wednesday to Friday, where the top eight finishers in each event will move on to the championship races on Saturday.

Last season, Schillinger was the only Rice swimmer to qualify for the NCAA Championships, which was no surprise given that Schillinger had also been crowned C-USA champion in the 200-yard breaststroke in both her freshman and sophomore seasons. But freshman Hanna Huston said she believes several Owls can advance to the NCAAs this year.

“We’ve been resting and getting a lot more sleep than usual so our team definitely has more energy,” Therien said. “I think we’re feeling very confident as a team. We’re trying to keep the pressure off and just keep the meet fun and swim fast while doing so.”

Sophomore Lindsay Mathys, who spent three months out of competition due to a stress fracture in her ankle, said she is thankful to be recovered in time to compete in the C-USA Championships, where last season she recorded the second-fastest 200-yard butterfly in Rice history.

“From being injured for so long, it can mentally affect you more than physically affect you,” Mathys said. “I got in touch with one of our alumni who did mental training and she gave me some pointers as to what to read and what to do. I read a lot of books on different approaches athletes have taken in the past and people have taken into performance in general. A lot of what I looked at where case studies of athletes to look how they got into the zone and how they improved themselves in the long term.”

In the classroom, Rice was named as an All-Scholar Team by the College Swimming Coaches Association of America for averaging a 3.47 GPA among its 24 swimmers during the fall 2018 semester. In the pool, three Owls were named Conference-USA Swimmer of the Week twice this season: Parish, Schillinger and Bui. Schillinger said she prioritizes both individual and team success.

“I feel motivated to win equally for both [individual and team events],” Schillinger said. “But I do particularly love the hype and excitement that goes into a relay. We are all amazing swimmers and contribute to the team in different ways, on and off the pool deck.”

According to Mathys, diversity of experience contributes to her team’s camaraderie.

“Our team has a very good mix [of upperclassmen and underclassmen],” Mathys said. “We definitely have a strong senior class. There are only four of them but they make a lot of impact. It is going to be really sad to see them go because they bring a lot of personality and spunk to the team, which helps us, especially when we are competing, to be more laid back.”

“We took a very different approach to conference this year,” Mathys said. “Last year we planned really far ahead and focused on the small details and winning, and this year we are focusing on one, having fun. Actually, last year it was a more personal thing but this year it is more of a team effort, so I think that will unify our team more in conference, which I’m really excited to see. And it also makes it less pressure, I think.”