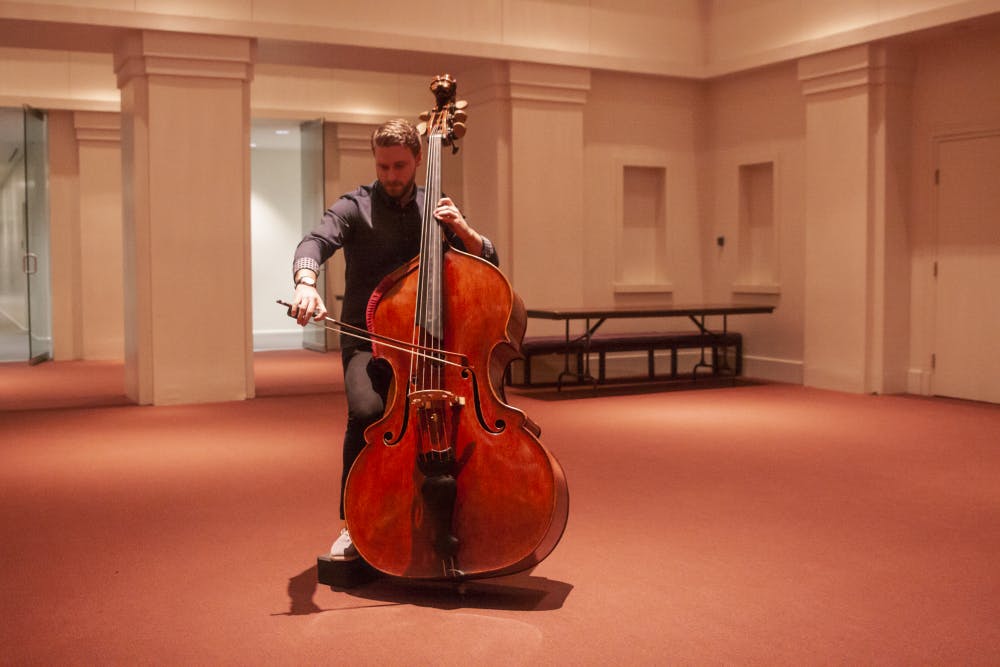 Peter Hatch’s passion for music feels something like fate. Hatch’s parents, who met in a music store, both sing. His mom plays piano and his dad guitar.

“There was always music in the house,” Hatch, a Lovett College senior, said. “It was a no-pressure [zone], and there [were] always instruments around to try. Once I was old enough to eventually hold a guitar, I started with that.”

Despite having started off his musical artistry with the guitar, Hatch says that by the time he was in elementary school, he knew he wanted to play the double bass.

“I started [playing the bass] right before third grade,” Hatch said. “It was at a summer program where you can try out all the instruments. I picked it because it was the only one I didn’t have to take with me to school because they had one there. As soon as I picked it up, I knew this was the one. I love[d] all the low notes and [knew] it could be such a beautiful instrument.”

Hatch is currently preparing for his upcoming recital, dedicating between three to five hours each day to practice. He is playing pieces by composers Beethoven and Franck; one of the pieces is written for an instrument quite different than the bass.

“Right now, I’m working on a violin sonata,” Hatch said. “For bass, it’s pretty uncommon to do, but the music is just so good. Luckily, it works out on the instrument so that it’s physically possible to do.”

These new approaches have helped Hatch grow and take different perspectives to situations outside of music.

“I think that you can apply a lot of things from music to life,” Hatch said. “Everything is problem-solving. I’m trying to play music that’s not written for my instrument and I have to work around it in a different way. That’s just what you have to do in any situation. You have to be creative and methodical about it.

Beyond his family, some of Hatch’s biggest inspirations have been his fellow music students at Rice, as well as his childhood music teacher.

“Growing up, my teacher played in the [Lyric Opera of Chicago] and I just wanted to be so much like him,” Hatch said. “I play on a similar instrument [to] him and I did everything I could to do exactly what he’s doing. He has a great playing job and teaches at a couple of universities. That’s what I’m trying to do with my life, too.”

When it comes to life after graduation, Hatch says he is still trying to decide between graduate school and working.

“It’s all pretty up in the air,” Hatch said. “I’ve got three grad schools that I’m applying to and I’m taking auditions for the Dallas Symphony, the Atlanta Symphony, St. Louis, Chicago and Minnesota Orchestra. I’d love to have any one of those jobs but I’m happy to stay in school and continue learning. If I establish myself in any of those areas, hopefully a teaching job will open up.”

Hatch said that his family’s love for music translates into support for him.

“Everything I have is because of them,” Hatch said. “I’m always telling them to come down for concerts and recitals. If I do something big — if I get to play for the Houston Symphony once in a while, they try to show up.”