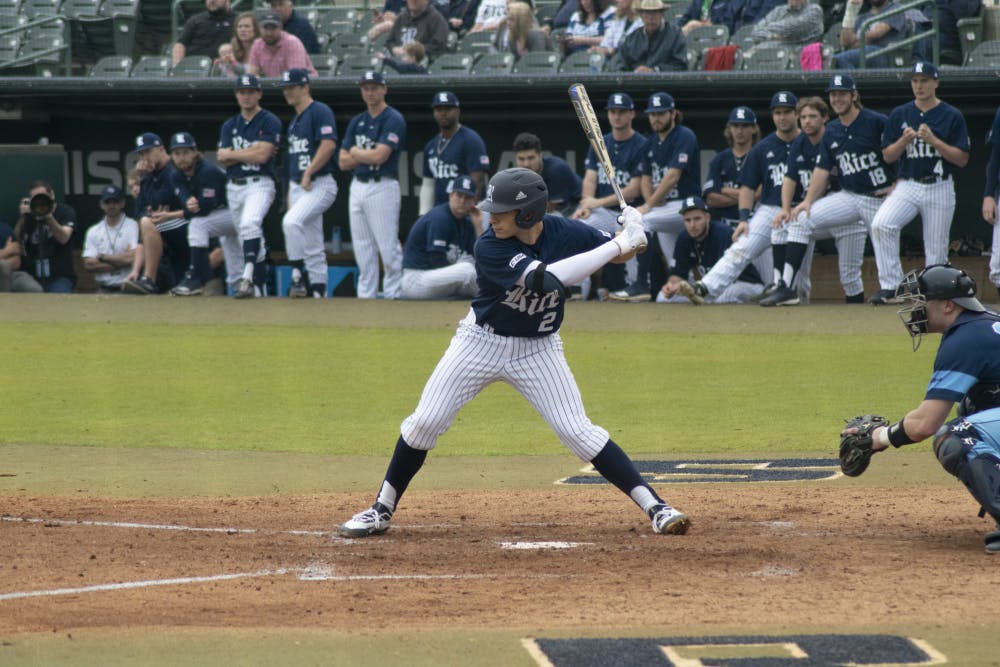 With two outs in the bottom of the ninth inning and freshman outfielder Antonio Cruz on first base, in a tie game during the Rice Owls’ home opener against the University of Rhode Island, junior second baseman Cade Edwards hit a double. This gave third-base coach Paul Janish the difficult choice of stopping Cruz at third base or sending him home for a play at the plate. When Janish waved him through, Cruz obeyed the sign and rounded the base, only to be thrown out at home by a wide margin. The Owls went on to lose the game 2-1 in the 10th inning.

Despite the result of the play, head coach Matt Bragga said he supported Janish’s decision to send Cruz home.

“At that point in time with only having six hits in the game, I think we had to take a chance and make [URI] handle the ball,” Bragga said.

The game continued to extras. In the top of the 10th inning, Rice gave up a run due to a costly error by Edwards. The following half-inning proved unsuccessful for the Owls, and the Rams snatched a victory to start Rice’s Bragga era with a loss.

Junior pitcher Matt Canterino was a bright spot despite the loss. The preseason Conference USA Pitcher of the Year started off the game with two consecutive strikeouts. He went on to record seven more in the game to finish 6.1 innings with a total of nine strikeouts and zero runs allowed.

In the end, Canterino received a no-decision, while senior pitcher Kendal Jefferies was handed the loss. Jeffries allowed only one earned run in 3.2 innings pitched, but he was on the mound when Edwards’ error allowed Rhode Island’s winning run to score.

Unexpectedly, senior pitcher Evan Kravetz took the mound as the starter for the second game against URI after senior pitcher Addison Moss was scratched due to soreness in his forearm, according to Bragga. Despite the surprise start, Kravetz struck out ten with zero runs allowed in five innings of work and left with Rice ahead by four.

Senior first baseman Dominic DiCaprio hit a RBI double in the fifth inning to give the Owls a 4-0 lead. However, the Rams responded in the sixth inning with three runs to get within one.

After coming up clutch for the Owls in the previous night as a pinch-hitter, Antonio Cruz hit an RBI single to give Rice a 5-3 lead. But despite heading into the ninth inning with a lead for the second game in a row, the Owls found themselves going into extra innings again after junior pitcher Garrett Gayle blew the save opportunity, giving up two runs in his relief appearance.

Sophomore pitcher Kel Bordwine took the mound in the top of the 10th inning after the bats went cold for the Owls in the bottom of the ninth. He gave up only one run in three innings, but Rice trailed Rhode Island 6-5 heading to the bottom of the 13th.

The Owls revived their hopes of victory when sophomore Dominic Cox scored on an error following a single by sophomore shortstop Trei Cruz. Cruz would record the game-winning run in the same inning, scoring on a passed ball to walk off with the victory.

Bragga said the team approached the end of the game with a different attitude from the previous night.

“I felt like [Friday] night we died and gave up a little bit, and tonight our guys really fought and that’s why we won,” Bragga said.

Sunday’s game was far less nerve-racking for Rice baseball fans than the two previous games. The Owls scored 13 unanswered runs through the first five innings, with six of the runs coming on a pair of homers by Trei Cruz. He finished the day with nine RBIs, the second-highest single-game mark in Rice baseball history. Trei Cruz had two triples and two home runs on the day and was later named the C-USA Hitter of the Week.

While the Owls’ offense highlighted the day, senior pitcher Jackson Parthasarathy also impressed as he recorded eight strikeouts with zero runs and only one hit allowed. The Owls’ 15th and final run of the game came on an RBI single by senior catcher Daniel Russell, who was a walk-on addition to this year’s team. The Owls ended with a 15-3 win, fueled by an offense that recorded 19 hits on the day.

Rice is next in action tonight against the University of Arizona.