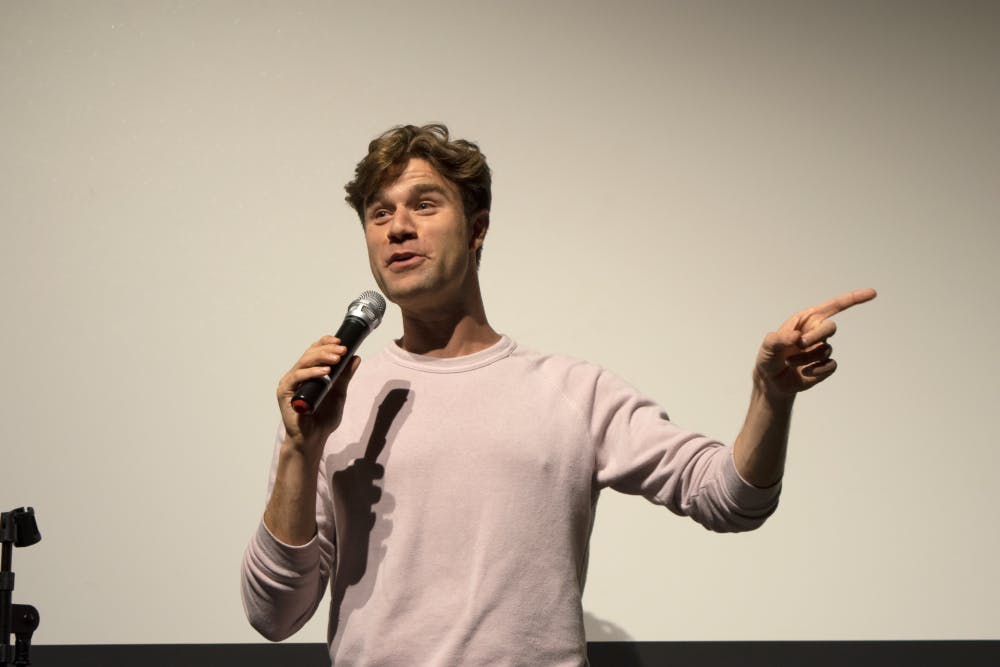 Comedian Matthew Broussard (Jones ’10) had his homecoming in front of a packed house in the Wiess commons Thursday night. Raised in Georgia, Broussard spent most of his time at Rice focusing on his computational and applied mathematics major and filling in electives with mechanical engineering courses. He started doing comedy in clubs when he was in his early twenties, committing to it full-time a little while later when he was forced to resign from his analyst position after burglars stole his work computer from his car. Since then, he has performed on Conan and The Tonight Show Starring Jimmy Fallon and finished as the runner-up on season two of Jeff Ross Presents: Roast Battle. Broussard was invited back on campus by Wiess College seniors Tim Skaras and Abbey Perez in coordination with Wiess college coordinator Ewart Jones and Andrew Schaefer, Wiess Magister and administrator of the Dr. Bill Wilson Student Initiative Grant.

“You need to wait for everyone who knew you in college to leave before you can do a set there,” Broussard said to me before the show.

“I get it; I look the guy in a rom-com who gets left at the end of the movie.”

Broussard opened his set by riffing on some of the “privileged white bro” material he has previously used in his appearances on Conan and Fallon. He notably added new jokes into these bits that portrayed a healthy cultural awareness, including jokes acknowledging body-shaming, mansplaining and gentrification. Even when he was ostensibly doubling down on something awful (“I’m not trying to body shame my girlfriend ... like, I’d f**k her”), he managed to always make himself the real punchline. Some might conclude that jokes like that were insensitive, but I found them to be both perfectly appropriate and hilarious, and judging by the laughter these jokes received, the room agreed. More importantly, Broussard was efficient with these additions, meaning the storylines didn’t distract from his larger comedic narratives. If Broussard can continue being true to his comedic self and adapting to the changing cultural landscape, it is only a matter of time before he becomes a top-flight comedian.

A key element of Broussard’s material that distinguishes him from other comedians is the academic nature of his material. The middle third of his set almost felt like the most well-received medical history lecture of all time: he made considerable riffs on the discovery of penicillin, early uses of Viagra, the mechanics of intrauterine devices and the synchronization of menstrual and lunar cycles. He also spent about five minutes on linguistics, comparing how vowels are used in the French and Hebrew languages. The mere fact that he was able to discuss this material in a comedy show is laudable in its own right; it speaks to Broussard’s comedic tempo and word economy. And while he did use traditional comedic gold mines like drugs, sex and poop as jumping off points for these bits, he performed his knowledge of the seemingly inane parts of the story with a notably different energy. His bro persona seemed to peel away in these moments, and a love of learning things — and in particular, nerdy things — seemed to show through.

As the night went on, it became increasingly apparent that the real Broussard was much more of a Rice student than his comedy belies. He shared photos from his collection of homemade Pokémon figurines and some of his favorite “Monday Pundays,” a series of punny rebus riddles he puts on the web every week. Broussard seemed genuinely surprised both by the level of interest that the puns generated and the speed with which the audience could solve them.

“One of the great things about comedy is that jokes can help us get through dark times, find levity in pain.”

The beauty of Broussard’s act is in its contradictions. There aren’t many communities in which both his comedy and his true self will feel at home. Broussard has made his name and his persona by leaning into his appearance, stereotyping himself as a fratty white guy — his work on Fallon, Conan and Comedy Central highlights this. But Thursday showed that this material makes Broussard a caricature of his true self; he has a much deeper, even quirkier personality. While there are certainly comedians for the nerdy communities — Chris Hardwick comes to mind — Broussard isn’t really that kind of nerd. His knowledge base seems a little too generalized to fit neatly into an established subrealm of our popular culture.

I don’t think it is a coincidence that Broussard’s act seemed to resonate especially well with the crowd of Rice students; he has lived through, and thus personifies, a kind of shared struggle that we all go through. Rice has always been known as a school of quirky students, but we’ve never established exactly how weird is too weird, leaving students in a constant state of anxiety over exactly how much quirkiness to let out. Not only does Broussard personify this struggle; he also shows us the best-case resolution to it. As we slowly reveal our true, weird selves, we find that members of the Rice family not only continue to accept us, but grow even closer to us than before.

Correction: This article was updated on Feb. 27 to reflect Wiess student involvement in inviting Broussard. A previous version of this article incorrectly stated that Dean Gorman invited Broussard and that this was Broussard’s first Rice performance.