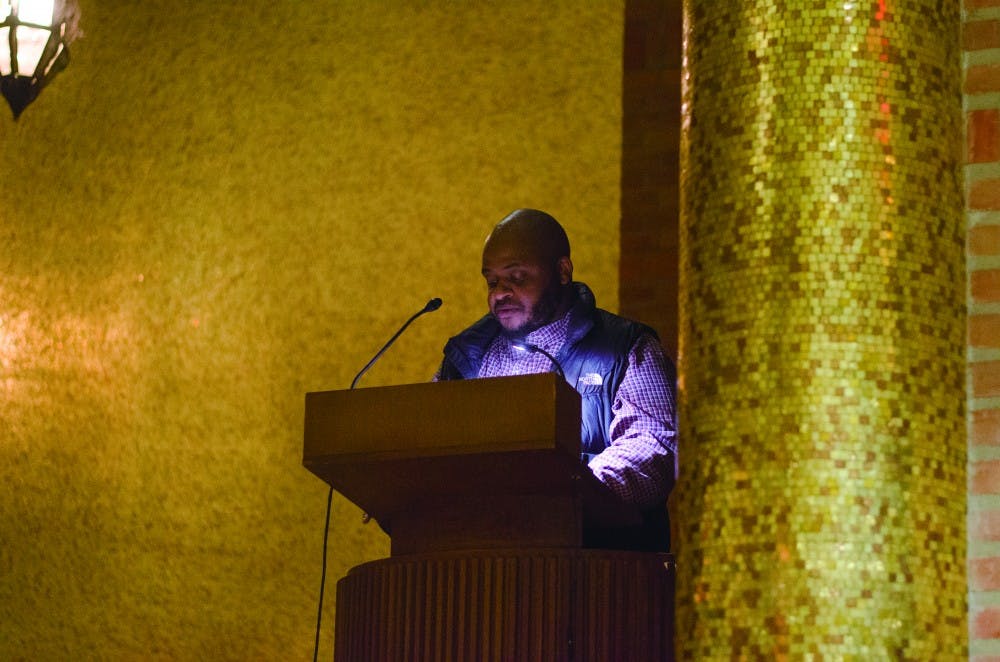 Kiese Laymon admits that he wanted to write a lie. A lie that would have fit neatly into the category of “American memoir.” Laymon assures us that we would have loved to read this titillating lie, but rather than succumbing to the lie, he instead bravely rejects the allure of a tantalizing story and delivers a raw confession of painful truths. Last Tuesday, Laymon visited Rice to speak these truths in person.

Rather than continuing to engage in what he calls “the old black work of pandering and lying to folk,” Laymon boldly confronts the weight and interconnectedness of racism, violence, abuse and love in his 2018 personal narrative and Carnegie Medal-winning “Heavy: An American Memoir.” The book gained extraordinary praise for Laymon’s unflinching honesty and brutal confessions regarding the lasting implications of growing up black in the American South, shouldering the weight of the nation’s history of racial violence and still trying to walk the fine lines between love, pain, truth, lies, fear and joy.

One of the most significant faculties of this memoir that distinguishes it as a truly innovative work becomes obvious in the first sentence: “I did not want to write to you.” The “you” in question is Laymon’s mother, whose fervor for Laymon’s education is ultimately rooted in her desire to prepare her son for a society that would treat him as lesser. In her ardent determination to steel Laymon for the social and political trauma that she deemed inevitable, she inflicted a different kind of trauma on her son in the form of physical abuse. By addressing “Heavy” to his mother, a compelling authority over Laymon’s experience of both love and violence, he admits his fears and traumas in an effort to reflect and reconcile.

Laymon came to the Rice Memorial Center Chapel on Feb. 5 for the Cherry Reading Series, which welcomes emerging and established writers of national repute to read their poetry, fiction, and non-fiction for the Rice community. The event saw drew a crowd of roughly 40 Rice students, staff and community members who filled every pew in the chapel.

Rice Assistant Professor of English and distinguished author Lacy Johnson introduced Laymon. In her initial review of the memoir, Johnson called “Heavy” “a triumph ... permeated with humility, bravery and a bold intersectional feminism.” That evening, Johnson welcomed Laymon as a friend and colleague whose literary accomplishments have contributed significantly to the sphere of creative nonfiction and inspired readers with his raw, unbridled honesty.

“[Laymon discusses] the violence of a culture that treats the bodies of black men with fear and suspicion more often than with tenderness and attentive care,” Johnson said.

Upon taking the podium, Laymon reckoned with a spirit that seemed to fill the room. He explained quite frankly that he would try to curse as much as possible for the sole reason of being in a place of worship, and that the audience shouldn’t be alarmed if he started sweating profusely. His friendly demeanor and candid sense of humor established an atmosphere of a certain sincerity that is at the heart of “Heavy.”

As Laymon read “Be,” a chapter from part one of “Heavy,” his vivid imagery and blunt retelling of events, both funny and tragic, captured the audience in an unrelenting wave of emotion, memory and appreciation for truth. Laymon’s painfully honest recollection of abuse and confusion is interwoven with fond memories of laughter and family, painting an explicit picture of the weight he carried on his adolescent body in the form of pounds as well as scars.

“Heavy” reforms the American memoir from being a performative evasion of the nation’s history of violence into an an honest, vulnerable medium through which the traumas of racism, misogyny and abuse inflicted on black male bodies may be more sincerely examined. Laymon departed from Rice with the advice to write the way we speak and to fearlessly confront the memories we may wish to forget in order to build more complete personal histories and valuable self-discoveries.

“Heavy: An American Memoir” is available for purchase through major bookselling platforms including Amazon, Audible and Barnes & Noble.