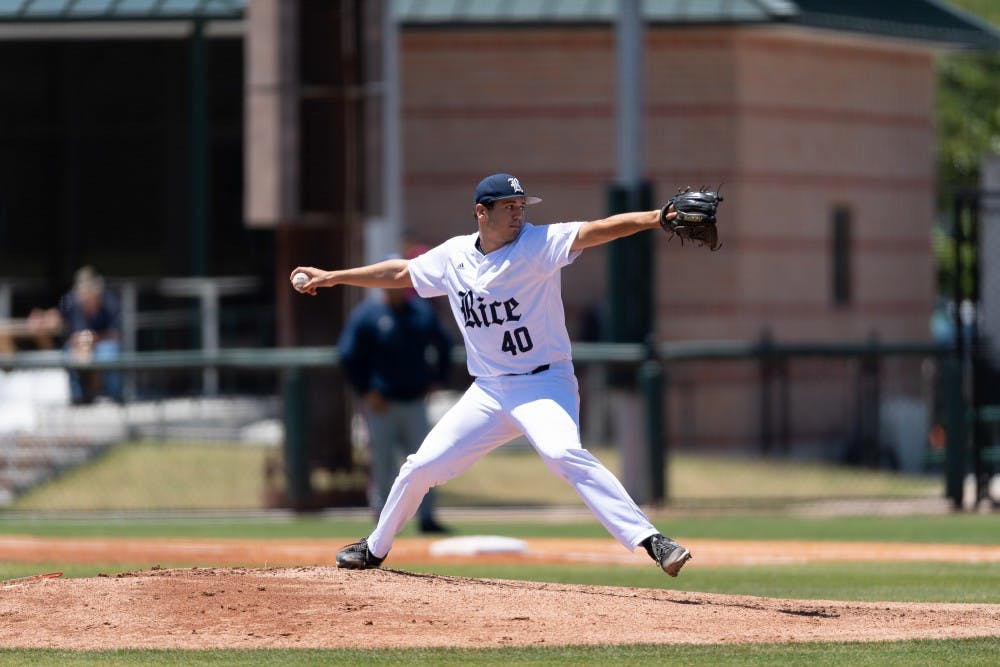 For the opening game of each weekend series, Rice baseball ace Matt Canterino will be entrusted to propel the Owls to wins on the mound. From each Monday morning to Friday evening, however, Canterino said his focus will be to prioritize his degree in mechanical engineering.

“What I’ve come to find is that I really like mechanical engineering and I really like baseball, and if you really like a couple of things, you’ll be able to find enough time to make it work,” Canterino said. “I have a good group of friends that I am able to work on assignments with or work on pitching with. You’re talking about grinding through some of these things - it’s the people around me who make it possible.”

Canterino enters spring 2019 chock-full of momentum: over the summer, he was the winning pitcher in the Cape Cod League All-Star Game and also pitched for the United States Collegiate National Team. Canterino was one of 55 players named to USA Baseball’s Golden Spikes Preseason Award Watch List, which recognizes the most outstanding college baseball players in the country.

Baseball America named Canterino to its preseason second-team All-America, and collegiate baseball writers placed him as a preseason third-team All-American. Last season, Canterino earned his place among All-Conference USA’s first team; this season, he was tabbed the preseason C-USA pitcher of the year.

Despite reaping individual success, Canterino said he was frustrated with his 7-5 pitching record and Rice’s 26-31-2 campaign last season.

“It wasn’t necessarily a function of one particular thing or a whole,” Canterino said. “Some things happen. You lose a little bit of that fire over the course of a long season. What other [college] sport plays 60 games in a year? Considering our games are three hours each? You’re talking about some adversity.”

According to Canterino, he is comfortable with the team’s transition from Wayne Graham to newly-hired Owls’ skipper Matt Bragga.

“I am beyond grateful for everything Coach Graham has done for me,” Canterino said. “[Graham] has made me a better ballplayer, a more intuitive ballplayer, and he really showed me what it takes to succeed at this level. What Coach Bragga has provided, both to myself and the team as a whole, is a different level of energy to build from. We know we will face adversity, so we need to have the energy and confidence to overcome that adversity - that’s what Coach Bragga has been teaching us. He always says that we should build each other up, because that’s what being a team is all about. In the end, it is the team that flourishes or dies.”

In seven starts at Reckling Park last season, Canterino finished 5-1 with 2.49 ERA and .155 opponent batting average allowed. Canterino said he benefits from a pregame routine established during his stint as a two-year varsity starter at Carroll High School in Southlake, Texas.

“I have a simple routine,” Canterino said. “It goes from stretching to watching the team to reading the scouting report to watching some film. I have it pretty down pat [so] that I know preparation isn’t much of an issue for me. I know that if anything goes wrong on the mound, it is because of something that I did wrong when I was pitching, not because of anything I did wrong beforehand. I know if anything goes awry, I have to make the adjustment [immediately].”

Canterino said he strives to teach compartmentalization to younger pitchers on the squad.

“We have a lot of young pitchers coming on, so I am trying to use my experience to help them have success,” Canterino said. “I’m not necessarily telling them what to do, I’m just showing them some things that work for me. In the end, I don’t want this program to be good when I’m here, I want it to be good afterwards too.”

With the option of signing with a Major League Baseball organization after this season, Canterino said this could be his last year on Rice’s campus.

“Playing professional baseball has been a dream of mine since I was a little kid,” Canterino said. “If it presents itself most clearly this year, then [I will pursue the draft]. That’s not saying I haven’t appreciated my time at Rice thus far. But it’s like Coach Bragga preaches: you have to have expectations for yourself and you have to have the confidence to go get them.”