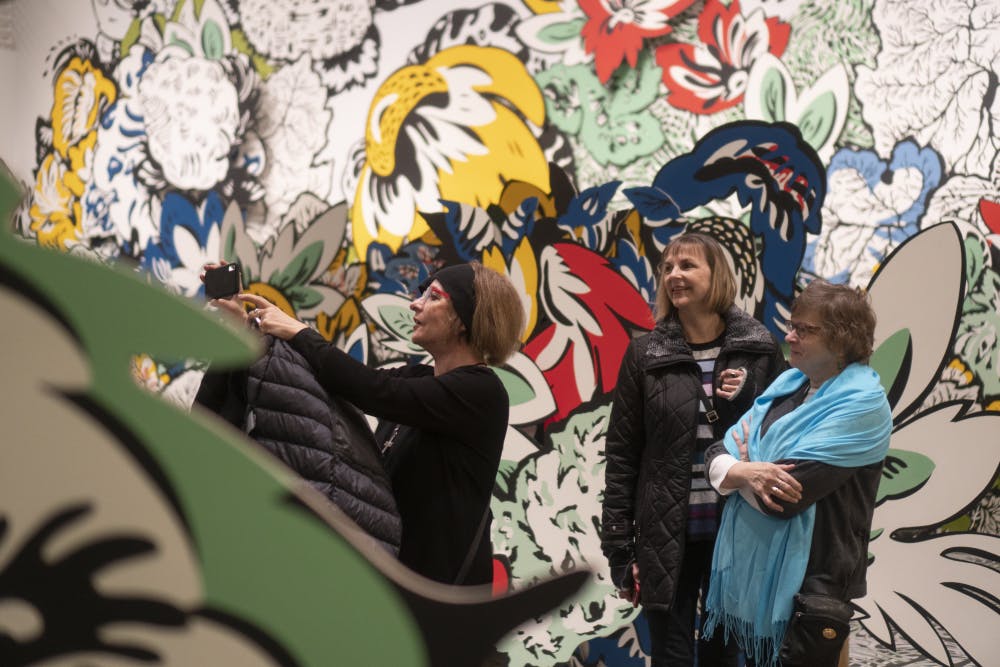 The Moody Center for the Arts reopened its doors this past Friday, ushering in a large crowd eager to experience the blossoming of its spring 2019 season.

The collection consists of four diverse works, ranging from conceptual sculpture to virtual reality film, which, despite their variety, maintain a cohesive thematic thread. In an apparent response to the predicted global expiration date (2030), the Moody’s works all grapple with the fraught relationship between humanity and the environment. Featuring artists from as far away as France and Japan, the collection challenges anthropocentric perspectives of nature, offering visitors alternate outlooks on such a universally pertinent issue.

Houston-based artist and Rice visual and dramatic arts professor Natasha Bowdoin’s massive installation “Sideways to the Sun” is featured prominently in Moody’s central gallery, where her use of “poisonous colors” and graphic line-work catches visitors’ eyes from outside the building’s glass walls. Bowdoin’s creation greets visitors from as early on as the front lobby, where larger-than-life floral prints extend out onto the floor, leading guests towards a surreal paradise, a paper-cut wonderland.

Bowdoin’s focus on the floral subject stems from a desire to highlight nature in a culture seeking to control and destroy it.

“I have great sympathy for nature in my work — for what we as humans do to it, how we contain, corrupt, appropriate, restrain and destroy the natural world both physically and symbolically,” Bowdoin, an assistant painting and drawing professor, said. “I try to conjure up a version of nature so that it can have the main stage. Maybe relocating a viewer amongst nature, even if it is my own artificial version of it, brings some awareness that might stick with viewers as they exit.”

And take the main stage it does. Bowdoin’s flora is the delightfully complex protagonist of its own show, a deftly interwoven amalgam of painting, paper-cutting and sculpture whose sheer scale dwarfs visitors. The layered collaging dominates the gallery’s walls, ground and several free-standing platforms, expressing a density of vegetation which refutes humankind’s control.

“My work is made intuitively,” Bowdoin said. “I don’t plan anything out ahead of time. It’s more that I generate a lot of small pieces in the studio, bring them to the space and start to improvise from there.”

The eventual deconstruction of “Sideways to the Sun” will continue the cycle.

“When the work comes down, most of it will come back to my studio, be disassembled, deconstructed and pieced back together into some [thing] else,” Bowdoin said. “The idea behind the installations is that they really rarely go together the same way twice. Instead, pieces come down and get transformed into something else, resisting any ultimately finalized form.”

In this way, nature’s capability for sustainable transformation is reflected, as each new iteration bears seeds for her next work.

“It’s my own version of recycling, I suppose,” Bowdoin said.

Couple this context with Bowdoin’s experimental, rolling cart platforms (which will be activated in later Moody events), and one can begin to better appreciate the organic dynamism characterizing Bowdoin’s art.

While undoubtedly in dialogue with its neighboring installations, “Sideways to the Sun” remains singular in its approach to the collection’s overarching environmental concerns. “We Were the Robots” and “Planet Infinity” provoke visitors by speculating about a post-apocalyptic future where nature reclaims its primacy in our absence; in these works, a ecocentric perspective spotlights our current anthropocentric tendencies. Bowdoin, however, signals the human subjectivity in our relationship to nature by magnifying it, asking visitors to face its lulling illusion. Inspired by disparate attempts to interpret and capture nature, Bowdoin turns to human knowledge production — such as historic scientific illustrations, film, exploration narratives and music — to inform her creations.

“I intentionally don’t even look at images of actual nature,” Bowdoin said. “I’m more interested in looking at other artists’ and authors’ renditions of nature. Earlier naturalists, artists and writers were out in the world trying to document and reflect on nature, but they often got it a bit wrong or got it at least a bit strange. Animals and plants were partially documented and described through drawing and writing, but there was also a mysterious element that crept in where science and myth could be of equal presence and importance.”

Melding these alternately romanticized and mistaken interpretations confronts the beauty and danger in the meaning humans project onto nature. Bowdoin, then, only not acknowledges the subjective human perspective but wields its inherent fallibility to depict an rendition that resists our instinctive categorization and objectification.

“I try my best to present an image of nature that is harder to pin down, harder to decipher and one that doesn’t need human beings necessarily to complete it,” Bowdoin said. “Maybe an iteration of nature that could exist independently on its own from the definitions we try to affix to it. One that hopefully remains in a visible flux both materially and in meaning. I think meaning can be more powerful that way.”

On display until May 18, “Sideways to the Sun” is a must see.