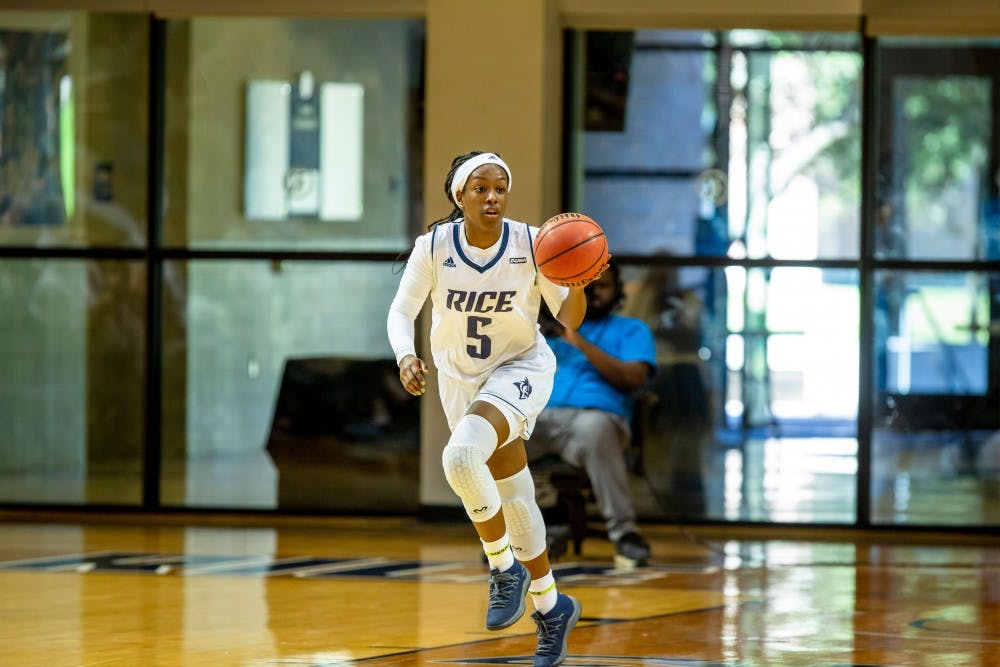 Lauren Grigsby, a senior guard on the women’s basketball team, begins nearly every game sitting on the bench, but she doesn’t mind at all. According to Grigsby, fulfilling her role as a player off the bench requires her to take on different responsibilities in each game.

“I personally like coming off the bench because it gives me a chance to analyze the game and try to spot some of the opposing team’s weaknesses,” Grigsby said. “Also, if my teammates or coaches see anything on the bench as well, they will mention it, and I’ll try to go into the game and implement it and hope to help the team in any way I can.”

Grigsby is a four-year member of the Owls and has played for Rice during the entirety of Tina Langley’s tenure as head coach. This season, she is scoring 8.5 points per game and shooting a team-high 44 percent from 3-point range. Fellow senior and 3-point sharpshooter Nicole Iademarco said Grigsby’s excellence as a perimeter threat has opened up the floor for paint scorers like sophomore center Nancy Mulkey.

“Lauren is always great to play with,” Iademarco said. “She attacks the basket really hard and she does a lot of different things.”

Langley has chosen to start Grigsby in two games and has played her in all 16. According to Langley, possessing excellent scorers such as Iademarco, a forward and junior guard Erica Ogwumike force her to make difficult decisions in regards to starting lineups.

“Depth is a blessing,” Langley said. “We have not been as deep as we are at this point in a long time. We have a lot of players who can contribute. It gives each of them confidence; that is [if] they are not performing on that night, someone else has their back. It is the mark of championship teams to have depth.”

Currently, Rice stands at 13-3 and has claimed a victory in each of its first four Conference USA games. Grigsby’s performances have been mostly inspired with a few hiccups: on one hand, she has notched eight double-digit scoring games; on the other hand, she has been held scoreless in three games this season. In each of Grigsby’s scoreless games, she played 10 minutes or fewer.

Grigsby has been given a career-high average of 20.6 minutes per game this season and has produced extremely efficient shooting numbers. In addition to shooting 44 percent from three-point range, Grigsby also shoots 51 percent from the field and 85 percent from the free throw line, which ranks second and first among Rice guards, respectively.

Grigsby’s 3-point shooting has improved each year with the Owls. In her first year at Rice, Grigsby shot 37 percent. She improved that to 40 percent her sophomore year and raised it a tick the year after that.

This year, her overall field goal percentage, points per game and assists per game are also all career-highs.   According to her, playing beside attack-minded scorers such as Ogwumike and Iademarco has allowed her shooting ability to flourish.

“My teammates continue to put me in a position to get open shots and I feel it is my job to knock them down,” Grigsby said. “If I’m not, I just have to go get in some extra shots [in practice] so they can continue to depend on me when they set me up.”

During Grigsby’s freshman year and Langley’s first season as head coach, Rice finished a paltry 9-22. After easily surpassing nine wins in each year since, including a Women’s Basketball Invitational championship and a Women’s National Invitation Tournament berth, Grigsby said her coach deserves heaps of praise.

“I’d say the biggest difference [between then and now] is the fact we can all help coach one another and hold each other accountable,” Grigsby said. “When I first got here, Coach Langley was implementing all our [playcalling]systems, so no one could really help anyone because we were all learning it for the first time. Now our [four] seniors have all been around long enough to know what’s expected of us.”

Grigsby has scored 17 points combined in Rice’s two most recent conference games. According to her, as other teams attempt to lock down Iademarco, who just broke the Owls’ all time 3-point makes record, open shots will be available.

“I’d say my role [throughout the conference season] would be to continue to be a spark off the bench and bring as much energy as I can,” Grigsby said. “Hopefully I can just help push my teammates to be the best they can be every day in practice.”