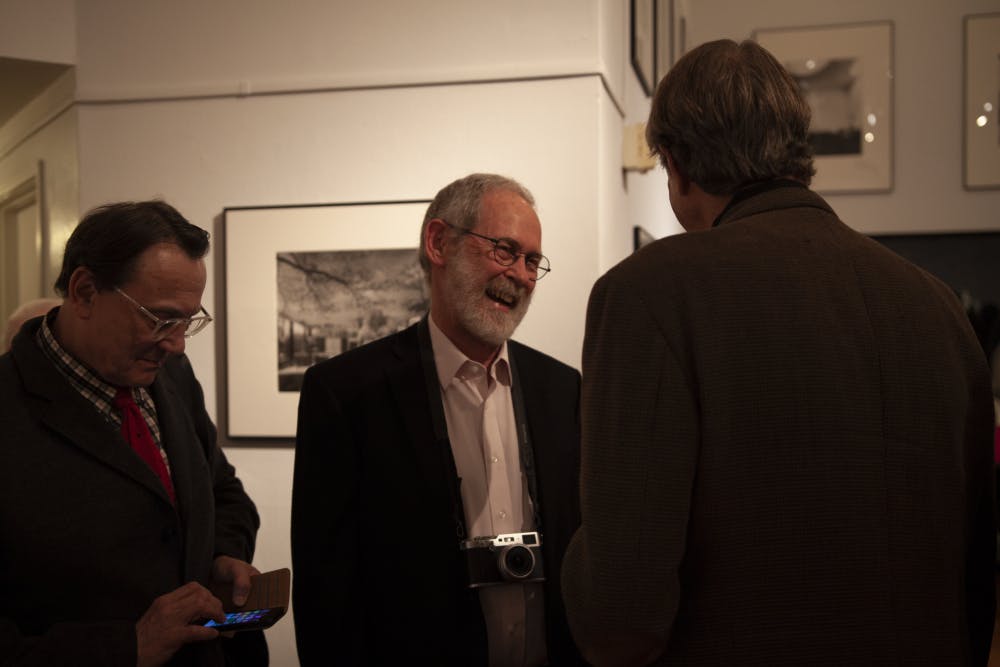 A group photo usually includes three elements: the passerby photographer, the impatient photographed group and a phone camera. On Thursday, I got to be a part of the photographed group — but the photographer was former photography professor Paul Hester (Wiess ‘71), and instead of using a phone, he opted for a giant view camera. In classic Paul fashion, we were gathered in this film photo to celebrate the opening of his exhibition, “Business & Pleasure: Fifty Years of Photographs by Paul Hester.”

The event, hosted in the Rice Media Center, was packed — Hester later commented to me that it was a good thing the fire marshal didn’t stop by. Fans, former students and fellow colleagues jammed into the space to look at work ranging from Hester’s college years to post-grad photographs taken on a Thomas J. Watson fellowship to collaborative work with his wife, Lisa Hardaway (Brown ‘81). Like its onlookers, the photographs themselves were arranged in every nook and cranny: visit the men’s room, and you might be confronted with a photograph of Spanish-style architecture.

Hester, who taught photography at Rice for 15 years, is a Rice alum, as are Hardaway and his two sons, Eric Hester (Wiess ‘07) and Noah Hardaway (Wiess ‘18). At the opening, Hester clarified that he is not retired, but “taking a break from teaching” and focusing his time on taking photographs of the Menil’s collection.

I had the opportunity to talk to Hester, also a former teacher of mine, twice — once, for two hours, before I lost the audio file, and a second time, for two hours, since he was patient enough to do it again. Parts of the interview are embedded online for a more holistic experience of Hester and his exhibit.

Hester and Hardaway own a joint business, Hester + Hardaway, and worked together for this exhibit. Hardaway, a Shepherd School graduate, curated the exhibit, choosing which photographs to display and where to display them.

“I was busy doing some other work, and [Hardaway] said, you gotta get started on this,” Hester said. “So she started pulling prints out of the boxes and getting things together, making connections between work from different periods of time, expressing her preferences for different things.”

Throughout the exhibit, Hester expressed his appreciation for Hardaway’s vision, chuckling at some of her paired choices and exclaiming that he never would have seen such connections. The result is an exhibition that feels cohesive, with a chronological beginning that unravels into a new order later, paired together by composition and subject as opposed to time. Such careful thought even led Hardaway to place a photo in the men’s and women’s restrooms — a fireplace in the men’s and a cactus in the women’s. Equally thoughtful are the architectural photographs that lead visitors in a winding U-turn, finishing in an almost hidden room full of Hester’s students’ work.

“I put up photographs from students that I had that maybe they never picked up from the class, or that maybe I had kept from an assignment and forgot to return,” Hester said. “At the end of the exhibit, I'm going to put the students' books in a collection in Fondren Library.”

Indeed, on a table in that room is none other than my own final photo book, accidentally abandoned in the final exam rush but kept intact under Hester and Hardaway’s careful eye.

Hester maintains his theme of business and pleasure throughout his exhibit, seamlessly interlacing photographs from work and photographs from play and demonstrating the two are not mutually exclusive. Oftentimes, it is difficult to tell which photos were commissioned and which were taken for fun, since all seem to carry the same weight and careful compositional thought.

“[Business and pleasure are] sometimes seen as oppositional,” Hester said. “You either have to become a professional artist and sell your soul, or you're an artist and you're starving. I didn't want to starve, but I knew I wanted to take lots of photographs.”

Hester traces his professional career back to his time as an architecture student at Rice (he later changed his major to photography in his senior year), when his classmates would pay him to take photos of their architectural models. From there, Hester’s career blossomed, expanding into work for magazines like Cite and Texas Architecture and for notable names like Diane Keaton, Philip Johnson and Georgia O’Keeffe.

“I think that business is being able to go on location when somebody calls you and make the best picture that you can,” Hester said. “And that taught me that I can photograph anywhere. I can photograph anything. And everything is interesting, if you look at it the right way."

In the main gallery, a stunning group of photos are hung in a single line. These works, collaborations by Hester and Hardaway, are of the late painter Georgia O’Keeffe’s New Mexico house, where she made some of her most famous work. Hester was commissioned to preserve her house through his photography. The photos invoke a sense of halted activity, as if O’Keeffe had just departed to run an errand and would be right back.

“[O’Keeffe] was a very austere woman,” Hester said. “You'd see photographs of her dressed in all black, way before we all wore black.”

That austerity, and O’Keeffe’s biography, inspired Hardaway so much that she had to have her own interaction with O’Keeffe, far before their assignment to photograph her house. Hester said that Hardaway drove down from Colorado to O’Keeffe’s studio with flute in hand, just to play a song for the artist.

“The housekeeper answers the door and Lisa says, 'I would like to play my flute for Ms. O'Keeffe,’” Hester said. “And the housekeeper says, 'Okay, wait a minute,' goes away and then a few minutes later, Ms. O'Keeffe comes out of her studio and stands there and just sort of nods.”

Hardaway had noticed that O’Keeffe liked the composer Georg Philipp Telemann based on her biography, and practiced a Telemann piece — but not enough to have memorized it.

“So she spreads the music sheets down on the ground, puts rocks on the four corners, gets down on her knees and plays the Telemann for Ms. O'Keeffe,” Hester said. “And when she's through, Ms. O'Keeffe nods and says 'Thank you very much,' and she goes back into her house, and that was it. So to go back to this location, for Lisa, was like — amazing.”

Hester said that he was drawn to O’Keeffe for different reasons — her husband, Alfred Stieglitz, spent his career working to make photography an art form.

“Because of Stiglitz, [O’Keeffe] was in this circle where there were a lot of photographers,” Hester said. “Ansel Adams would come and visit her. I took a shower in the same shower that Ansel Adams had taken a shower in. How about that?”

The exhibition winds upstairs with an increased emphasis on color photography. The work here balances brooding, thoughtful portraits within an operating room with colorful, funny photos from a quinceañera, culminating in a dark room near the back with a completely different energy.

The dark room, covered in black foam and sparsely lit, is a literal representation of a darker side to Hester’s work. Here, experimental photography features alterations like transposed text, collage and stitching as well as nude subjects — some wear Ronald Reagan masks, others are wrapped up in toilet paper.

Hester said that this work displays another aspect of his personality.

“[The viewer] doesn't just look at it and say, 'Oh that's a nice picture. I like the lines' or 'I like the composition,'” Hester said. “Great, thanks, but that's not what I'm after. I want some intensity of emotion, some feeling. When I would [show my work], people were either uncomfortable or uninterested in that approach. It violated their feelings or their idea of what a photograph would be.”

“Different” describes this part of the exhibition well — not only are there many nude photos, but also that many make bold political statements at contrast with aesthetically pleasing photos of architecture or houses.

“Someone asked me at the exhibit and said, 'I can't believe this is all work by the same person, they all seem so different,'” Hester said.” And yes, they do seem different, but I know that I'm the common denominator, and I don't see them in opposition, just like I don't see business and pleasure as opposing forces. Each of us has a range of emotions, and some of our emotions are more difficult to share with other people. We don't want to be vulnerable. I think the best portraits are when the subject trusts the photographer and will let down their guard.”

“Business & Pleasure: Fifty Years of Photographs by Paul Hester” is on display at the Rice Media Center until Feb. 22. The gallery is open from 9 - 5 p.m., Mondays to Fridays, and admission is always free.