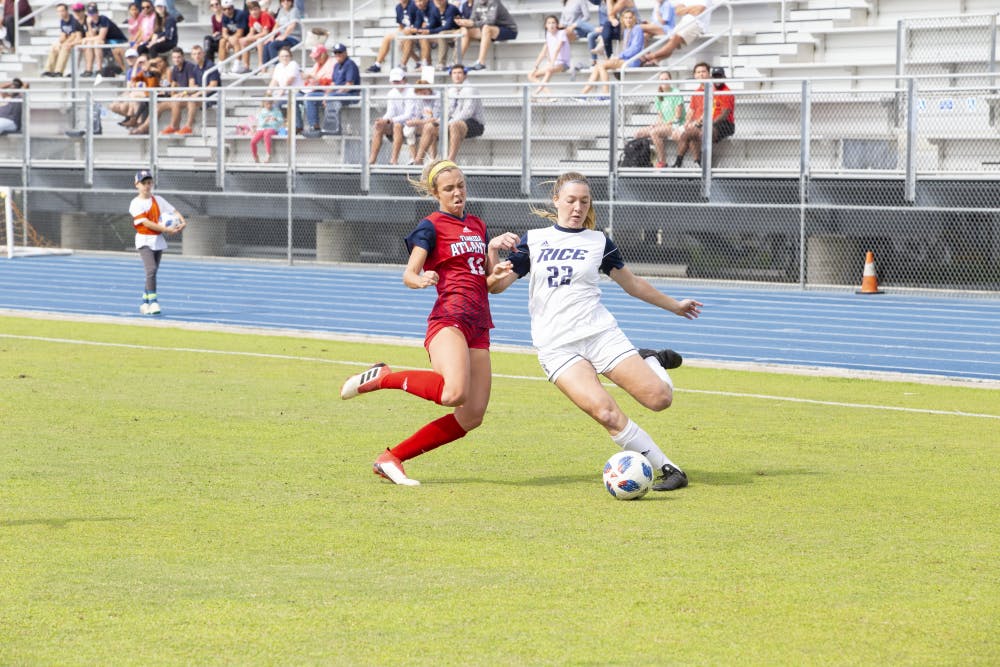 Rice soccer split a pair of home matches against two Conference USA foes from Florida this weekend at Holloway Field.

On Friday night, the Owls dominated Florida International University, 5-0. In the win over FIU, Rice scored three goals in the first half and two goals in the second half.

Early action was back and forth between the teams. In the 16th minute, Rice was able to corral an overwhelmed FIU back line and senior midfielder Dominique Mazero capitalized with a tap-in goal to put the Owls up 1-0.

It took less than one minute after Mazero’s opening goal for Rice to double its lead. Senior forward Annie Walker, who entered the game as the Owls’ second-leading goal scorer, stole the ball from FIU midfielder Olivia Sandahl and played to senior forward Marissa Topolski. A short pass back from Topolski allowed Walker to find a window between two Panther defenders for a goal. Walker said the score was one of her favorites.

“It always feels good to score,” Walker said. “I love the shot I got to take — top of the box, inside. I hit an in-swinger shot. Everyone around me was like, ‘Yeah!’”

Rice continued to pressure the FIU defense after gaining control early. Owls head coach Nicky Adams substituted sophomore midfielder Ashley Burgess in the 21st minute for Walker, and Burgess rewarded Adams’ trust with a highlight-reel goal. After three step-over moves, and a rolling shot across the FIU keeper, Burgess single-handedly delivered the Owls’ third score of the first half.

Walker said the team’s objective after halftime was to double its lead. Rice narrowly missed its target, but nonetheless delivered a shutout win on Senior Night in front of a raucous crowd.

“It’s insane that it is senior night already,” Walker said. “It didn’t hit me until I was in the locker room with my teammates. There was so much emotion in the game and in the emotional build-up to the game. It was so much fun to come out here and work for each other.”

Overall, both teams shared possession equally. Adams said she adjusted her defensive plan to pressure FAU on the flanks, which prevented run-outs and easy crosses.

Neither team looked to have control of the match until the 45th minute, when both teams lined up for a Rice goal kick after the ball appeared to have been last touched by an FAU player. Instead, officials called for an FAU corner kick. The ball was sent in by FAU midfielder Mimi Godoy to a swarm of Rice defenders and FAU attackers. After 20 seconds of tussling, midfielder Tiril Haga’s right foot produced the visitors’ lone goal of the afternoon.

According to Adams, Rice freshman goalkeeper Bella Killgore was not at fault for letting the goal in.

“Bella made the saves she is supposed to make,” Adams said. “With the goal, I think every person on my team could have raised their hand and said ‘I could have kicked it out, I could have dove for it.’”

To overcome the one-goal deficit, the Owls began to pressure the FAU back line and attack in wider areas. In the 85th minute, sophomore midfielder Rebecca Keane fired a left-footed shot that senior defender Darcy Mickalow sent toward the goal with a header that deflected off the FAU goalkeeper. Mickalow then tapped in a goal; however, the officials signaled that the header was offsides. Many fans booed, but Mickalow said she knew her goal would not count.

“I do think it was offsides,” Mickalow said. “I knew [Keane] was going to shoot the ball with her left foot. So I guess I was just a little too excited, and I went in a step too soon.”

As a consequence of last weekend’s results, the Owls (6-8-1, 4-4-1 in C-USA) are now ranked eighth in C-USA; Rice’s last regular season opponent, the University of North Carolina, Charlotte, lurks one spot behind.

What remains is a sudden-death match between the Owls and 49ers this Sunday in Charlotte. The winner will qualify for next week’s eight-team C-USA Tournament, and the loser will see its season end.

Stay tuned to the Rice Thresher on Twitter @RiceThresherSports to receive updates on Sunday’s action.