Season three of “Daredevil”: Darker and more impressive than ever 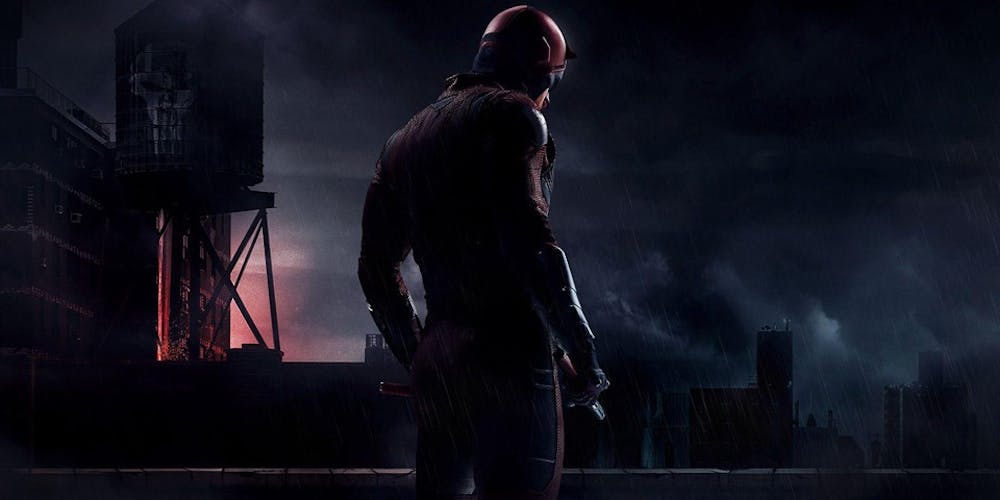 The third season of the Marvel show “Daredevil,” released Oct. 19, delivers as the finest installment yet. Its intricate yet bleak story provides a powerful emotional frame that serves as some of the most impressive superhero storytelling seen outside of comic book panels.

Picking up after the events of “The Defenders” miniseries, season three finds blind lawyer and masked vigilante Matt Murdock/Daredevil (Charlie Cox) both physically and mentally shattered from the explosion that almost killed him. Shutting himself off completely from his friends, Matt puts his all into once again taking down the recently freed and immensely influential criminal mastermind Wilson Fisk (Vincent D’Onofrio).

From the opening shot of Daredevil surrounded by fire and brimstone, the show immediately sets a weighty tone that does not let up throughout the season’s 13 episodes. The series has always maintained a dark atmosphere, but its grimness is taken to another level this time around. The unfortunate events of past seasons resurface in the characters’ memories, and their consequences come to pass in a thrilling, tragic fashion. The intensity of the events occurring onscreen is palpable, in large part due to the acting and cinematography.

Cox turns in his finest performance yet as a Daredevil awash in the depths of despair. Even better than before, the audience truly gets a sense of the magnitude of Matt’s Catholic guilt. Elden Henson as Foggy Nelson and Deborah Ann Woll as Karen Page are once more reliable as Matt’s emotional support system, and new addition Jay Ali is solid as hard-headed FBI agent Ray Nadeem. The standouts, though, are D’Onofrio as the brutish, menacing Fisk and Wilson Bethel as Dex, an FBI agent with a terrifying combination of mental instabilities and superhuman weaponry prowess.

The camerawork assists these wonderful performers through the use of subjective perspective — the directors try to put the viewers in the mindsets of the characters. This often takes the form of stylistic, shallow-focus shots that highlight the isolation and anxiety of each situation. This subjective perspective also appears in action scenes, though it configures itself differently there. The camera lingers on the action for extended periods and thereby underlines the characters’ physical exertion and toil; most notably, an entire complicated action sequence pulses with energy and danger as the camera follows Daredevil battling enemies in an impressive 11-minute unbroken take.

If one were to complain about anything, it would be that the show occasionally treads in narrative territory that could be deemed unbelievable or ridiculous. However, being as it is a series about a crime-fighting, superpowered blind man, this criticism cannot be taken too seriously. For what it is trying to accomplish, the show is as serious and believable as it could probably ever be.

All in all, season three of “Daredevil” is a grand superhero tale that solidifies what was already great about the show and adds further excellence to it. The series lives in the darkness and, just like its titular hero, finds brilliance there.

The entirety of “Daredevil” is available to stream on Netflix.