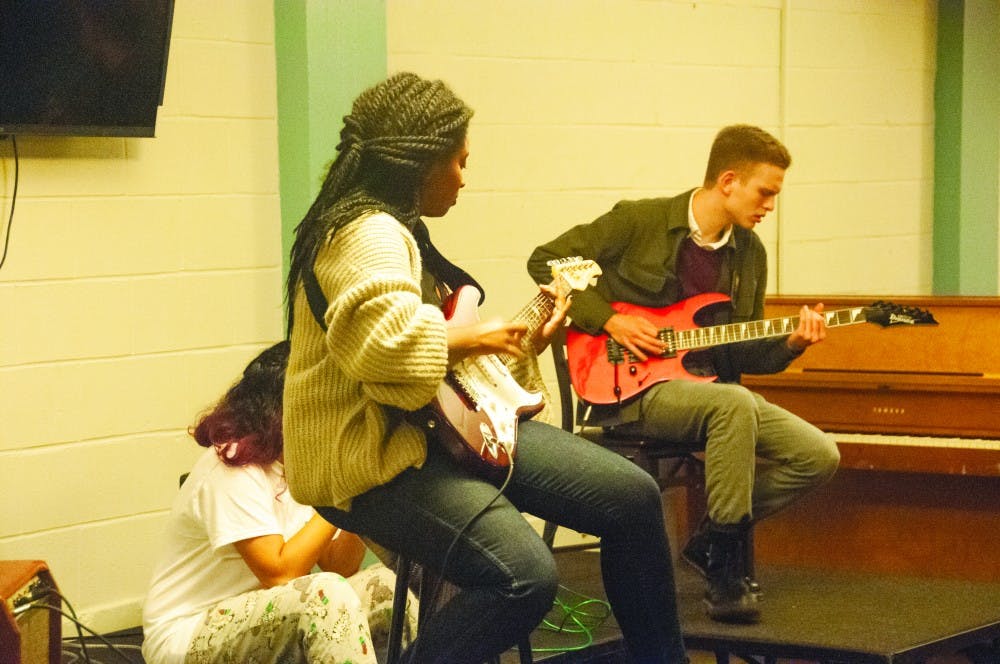 Rainbow fairy lights hung from the ceiling, enshrouding the room in a soft glow.  Artists of all crafts lounged on the blue couches of Lyle’s while munching on Thai Spice, pita chips and cookies. R2, Rice’s literary magazine, created this atmosphere for its fall Open Mic Night last Thursday at 7 p.m. in Lyle’s within the basement of Lovett College.

In a span of roughly two hours, students read poems about a variety of subjects including being small, the hectic chaos of a Rice student’s schedule and peeing from the London Eye. But poetry was not the only art form showcased that night – Rice’s mariachi band, Luna Llena, stopped by to perform. Brown College sophomore Al Green sang a German opera piece. Performances ranged from intense beatboxing to an original story being recited about an Olive Garden conspiracy to kidnap Italian grandmothers. Student art decorated the walls. The entire room was a nest of creativity.

Audience members were encouraged by the R2 staff to sign up to perform all throughout the night. In the gaps between performances, people walked up to the table next to the stage to add their name to the growing list of acts.

This is the second year that R2 hosted Open Mic Night in Lyle’s instead of Willy’s Pub. R2 editors-in-chief Lily Wulfemeyer, a Brown College junior, and Kristen Hickey, a Jones College junior, said the venue was chosen to create more focus on the art.

“At Pub, people would come and go all the time, but people at Lyle’s would sit down for the whole event,” Wulfemeyer said.

“We really wanted to create a sense of a safe space for performers,” Hickey added.

Wulfemeyer and Hickey were also quick to point out that R2 isn’t just a literary magazine; it’s for visual art too. Aside from the senior studio gallery at the end of the year, there are not many avenues for student artists to showcase their work. The R2 student art showcase gives an opportunity for non-VADA majors to let other students see their art. These changes in Open Mic Night are part of an initiative by Wulfemeyer and Hickey to increase the prominence of art in the Rice community at large.

It doesn’t take long to see how passionate Wulfemeyer and Hickey are about their work. Both have been involved in R2 since they were freshmen.

“When I got involved with R2 in freshman year, a lot of Rice students weren’t super engaged with it,” Hickey said.

According to Wulfemeyer and Hickey, they want to increase R2’s popularity and showcase the art of all Rice students regardless of major.

“We’re always encouraging people to submit [to R2], even if you’re afraid you won’t get published,” Wulfemeyer said. Hickey added that some of her favorite submissions were from engineering majors who submitted on a whim.

Their commitment to connecting people through art shined through Open Mic Night. According to Wulfemeyer and Hickey, this commitment  is carrying into this year’s R2 issue as well. For the 2018-2019 issue, Wulfemeyer and Hickey are using R2 as a platform to not only connect Rice students, but also to “synthesize multiple voices of Houston” and “open up Rice” to the broader Houston community.  This year, R2 will be accepting submissions from non-student members of the Houston community.

R2 is accepting submissions for this year’s issue until December.