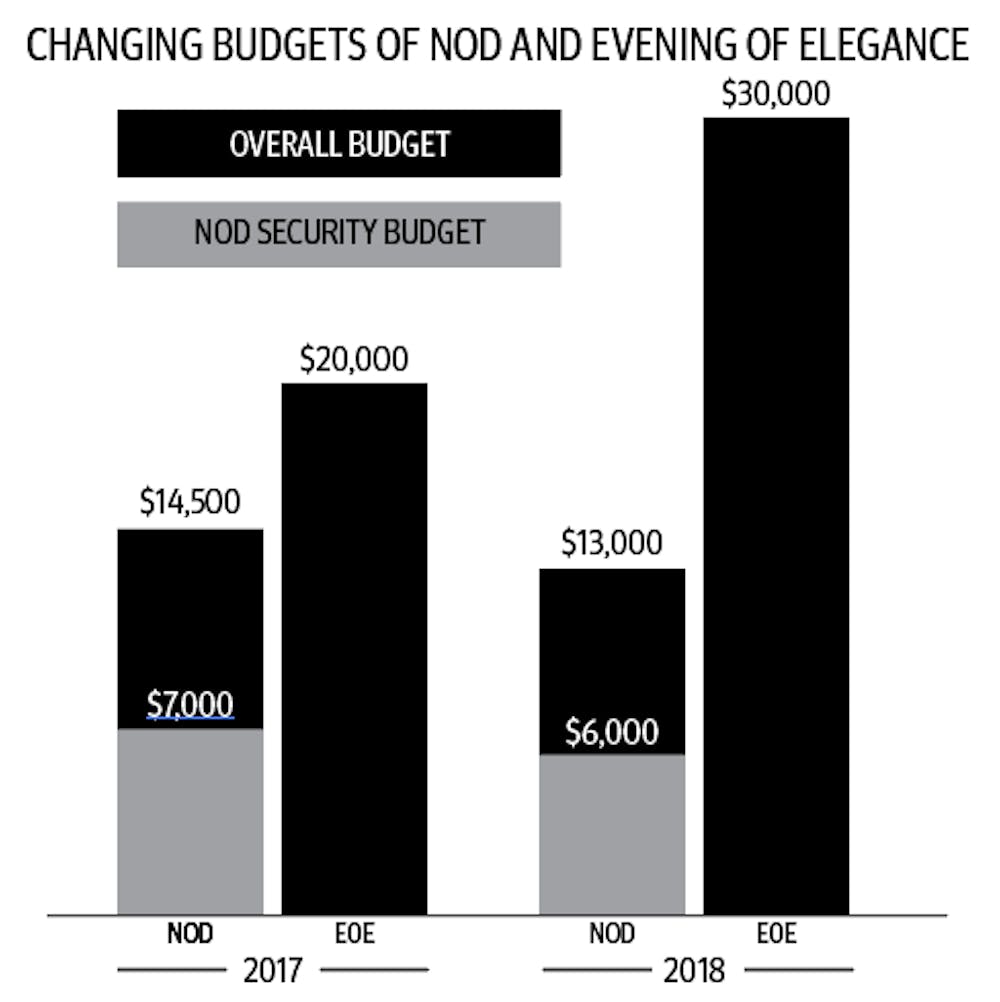 Night of Decadence, Wiess College’s public party, is introducing a high-reward costume contest and Evening of Elegance is increasing its budget, after attendance to EOE surpassed NOD for the first time ever last year. Both events are planned for the night of Saturday, Oct. 27.

Timothy Crouch, Chi Alpha’s EOE student coordinator, said the EOE budget will end up somewhere between $25,000 and $30,000 this year. The budget grew from the $20,000 used last year in anticipation of more than 1,000 attendees, according to Crouch.

“Last year, we nearly ran out of food because our attendance was much greater than anticipated,” Crouch, a Wiess senior, said. “So this year, we are buying twice as much food and have hired a food truck to come to campus during the party.”

Crouch said almost 90 percent of the EOE budget comes from Rice alumni donations and from Student Activities/President’s Programming funding. The other 10 percent of the funding comes from local churches, according to Crouch, though there is some overlap between alumni donations and church donations. According to Crouch, EOE received the maximum amount an event can receive from the fund: $1,500.

Wiess allotted a budget of $13,000 for NOD this year, not including ticket sales which go back into the budget, according to Akash Tarkunde, Wiess’ social vice president. Tarkunde said the total budget has not decreased from previous years.

Tarkunde said NOD is historically known to be “hardcore,” especially after 11 students were transported to the hospital due to excessive alcohol consumption in 2012. However, last year no students were hospitalized because of over-drinking. Due to the reduction in Emergency Medical Services transports, Wiess is saving $1,000 on security this year, utilizing only roughly $6,000 for security and on-call ambulances this year in comparison to $7,000 last year.

“It’s slow changes,” Tarkunde, a Wiess sophomore, said. “Obviously, we understand that RUPD, from their perspective, can’t just toss away all security because one year was good. But at the same time, for the past two years, we’ve had minimal hospitalizations, so we have asked RUPD to lower it a little bit and gradually work from there.”

Last year, a comment made to the Thresher by Chi Alpha staff member Mathison Ingham, who said EOE offered students an alternative to NOD that gave them “dignity,” resulted in a letter to the editor by Josh Kaye titled, “The Only Lack of Dignity at Nod was Chi Alpha’s” and social media posts.  The Thresher reached out to Ingham for comment this year, but he did not respond.

McMurtry College senior Katie Webber made a Facebook post stating she will not be attending Evening of Elegance until there is a “large-scale” apology for Ingham’s comment.

“I think that having alternatives to NOD is good but claiming that those who attend NOD lack dignity is rude and plays into rape culture in that it reinforces the idea that how you dress or if you engage in party culture you are deserving of less respect,” Webber said. “I appreciate that individual members of Chi Alpha have said they disagree with his statements but a public announcement from a leader has to be apologized for publicly by a group leader not just  in private by individuals.”

Crouch said Ingham’s comment referred to Chi Alpha’s motivation to organize an event where all students felt safe, as he said some students attending NOD have experienced alcohol poisoning as well as unwanted sexual experiences.

“Because NOD was the biggest and most famous party of the year, many students perceived unwanted social pressure for them to attend,” Crouch said. “Many of our own students involved in Chi Alpha and their friends have had unwanted sexual experiences at NOD. When we said we wanted to create a party that ‘gave dignity to people and let them have fun in an uplifting atmosphere,’ this was the context and motivation for EOE. After hearing so many students’ stories, we wanted to create an atmosphere that truly affirmed every student’s dignity, where no one would feel at risk.”

Crouch said Chi Alpha apologizes for any students who were offended.

“We did not intend to imply that anyone who goes to NOD lacks inherent dignity or self-worth, and we apologize to anyone who interpreted it that way and thus felt personally disrespected,” Crouch said. “We were referring to the historical atmosphere of NOD, not the people who attend it. Since then, we have recognized the positive changes that the Wiess socials have implemented toward creating a safer and more welcoming atmosphere at NOD.”

Tarkunde said this year the Wiess Social Committee is trying to make NOD more of a Halloween party to make it a more viable option for all students. While students can still attend the party in their underwear, the incorporation of the Halloween theme is aimed to encourage students who don’t feel comfortable dressing down to attend NOD.

“One of the big things when we started being socials was that we want to throw a different NOD than the one that people don’t like, because we also don’t like that NOD,” Wiess Social Vice President and sophomore Muthu Chidambaram said. “It has changed a good amount.”

“One of the things we want to continue from last year is having inclusive decorations, not just white, heterosexual paintings on the windows,” Chidambaram said. “The biggest thing we are pushing this year is the costume contest. We want people to understand that NOD is a sex party, but it is also a Halloween party, so you can come in your costume and compete in the costume contest.”

The theme for this year’s party is AsstroNOD: A Journey to Uranus, in tribute to Travis Scott’s album AstroWorld. NOD tickets are $10 presale, and $15 at the door.

Evening of Elegance: A Moonlit Masquerade will be held in the Jamail Plaza and is free to attend. Crouch said he does not believe EOE competes with NOD for attendance but instead offers an alternative.

“When Evening of Elegance debuted in 2014, it was much smaller and originally held in the RMC’s Ray Courtyard,” Crouch said. “Every Evening of Elegance has been bigger and more exciting than the previous year’s edition — the jugglers and horse-drawn chariots were new additions last year — and the theme is always slightly different, but the core of the event remains the same: a swing-dancing party at which everyone is dressed to the nines, having a great time.”