MFAH’s ‘Tudors to Windsors’: A detailed view into an incomplete history 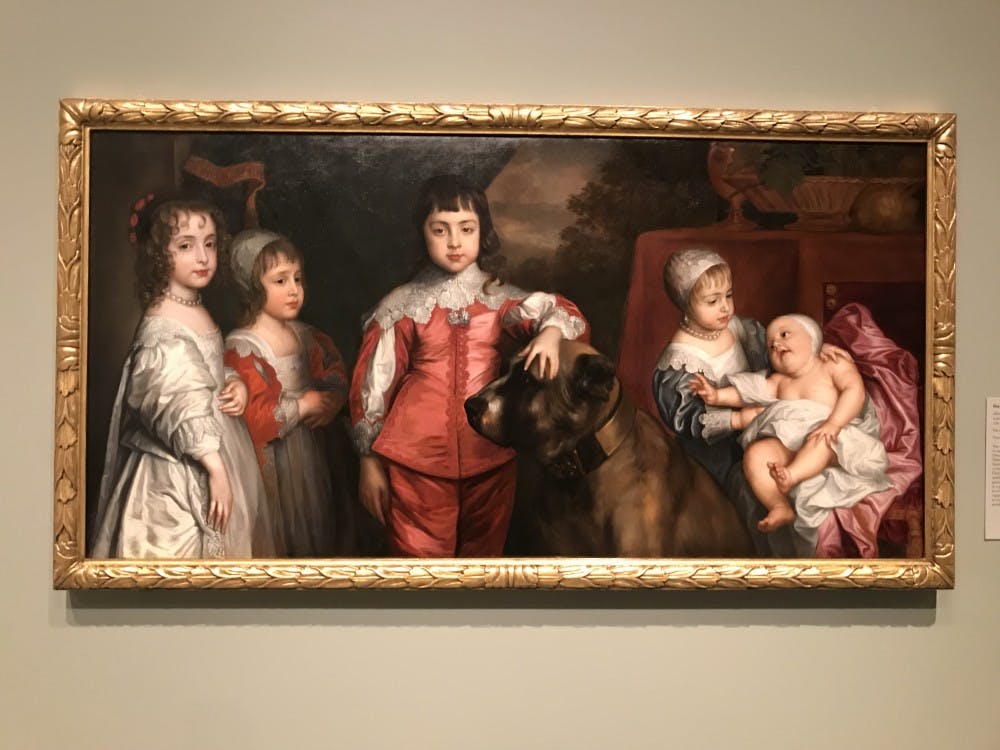 “Tudors to Windsors: British Royal Portraits from Holbein to Warhol” is not only the Museum of Fine Arts Houston’s latest exhibit, but also clearly a point of particular pride. Through an exclusive partnership with the National Portrait Gallery in London, the MFAH can now boast that it is the only U.S. venue to host the impressively numbered collection, most of which has never been viewed outside of the United Kingdom. The works’ unprecedented display is enthusiastically emphasized in the exhibit’s catalogue, advertisements and opening text.

Visitors are first greeted with a blown-up photograph in which Queen Elizabeth II herself walks through one of the museum’s thresholds — a gesture which seems to suggest the royal family’s personal endorsement. What’s more, she is accompanied by ex-Texas governor Ann Richards. Dressed identically to Her Highness, Richards appears to make eye contact with the viewer while the queen glances downward, face averted. The doorway is emblazoned with the museum’s title, capitalized prominently, betraying the MFAH’s excited desire to stake its own claim in history.

The average visitor’s excitement, on the other hand, requires coaxing and training, a task the display takes seriously. Following the queen’s (and Ann Richard’s) personal blessing, visitors are confronted with a generous timeline of British history, spanning from the reign of Henry VII all the way to Brexit, a necessary and appreciated resource for those of us who are far from anglophiles. The exhibit is helpfully, if not predictably, organized chronologically with color-coding for the four royal dynasties: the houses of Tudor, Stuart, Hanover and the reigning House of Windsor. An abundance of accompanying text, family trees and diagrams are provided, further contextualizing the monarchies and their specific legacies.

As one explores the gallery’s various rooms, the variety of the collection quickly becomes evident, as the traditionally painted portraiture of subjects such as King Henry VIII or Queen Victoria gives way to less expected mediums and figures. Coins, prints and the occasional garb — as well as the representation of royal mistresses, favorites and enemies — are featured frequently. The result is an extremely thorough array of content whose sheer volume proves rather daunting; one reaches the House of Windsor — the most contemporarily relevant and advertised portion  — exhausted and too drained to fully appreciate the transition into modernity.

Despite persistent attempts to address Britain’s transforming realities, repetitive content and design choices make for an impression that confirms the late Queen Elizabeth’s motto: that through turbulent global histories, the nature of British royal history has remained “Semper eadem,” or always the same. As a result, the exhibit’s promises of illuminating interrogations into changing ideas of monarchy and nationhood are left generally unfulfilled. Opportunities through which to assess the portraiture’s relationship with Britain’s prominent role on the global stage — a volatile and crucial aspect of an evolving nationhood — are largely ignored. Specifically, other than the brief presentation of a simplified map illustrating the British Empire, the colonial origins of Britain’s mass wealth are not explicated even as the empire’s prosperity is brandished ostentatiously. This omission, however dangerous, is by no means unique and would not be so egregious if not for the moments of overt iconography which provide clear opportunities for addressing the foundational legacy of imperialism on British monarchy. A portrait of the Duchess of Portsmouth featuring a small African child offering her jewels and a depiction of royal architecture with clear Islamic influences both go unexplored. Overall, the exhibit concerns itself with domestic factors affecting nationhood, turning in rather than out.

Turning to the suggested tour de force, as indicated by the decision to post Princess Di’s face on the MFAH’s facade, visitors emerge in the modern age, where photography and the royal family’s celebrity status dramatically influence royal portraiture. Here, the life of Queen Elizabeth II is afforded meticulous and reverent attention, as the variety and frequency in her likeness’s representation is well documented. Conversely, a surprisingly constrained amount of space is allotted toward the beloved Princess Di, noted again in the coverage of the living royals.

Interestingly, it is the faces most frequently seen in today’s age — those of Kate Middleton, Prince William, their son George and Prince Harry — which seem to be only cursorily covered. Perhaps this impression is due to the unlimited nature of photography, or maybe it is a manifestation of modern demands for unfettered access into the pseudo-celebrity status of the royal family. Most likely it is the living nature of the subjects, whose present reputations and legacies have yet to fully form, preventing a completely comprehensive collection of their likenesses. Still, expectations for an exhibit with contemporary inclinations are left unsatisfied.

At $18 or $23 for college students, ticket prices confirm that this exhibit, while undoubtedly a compelling testament to the artistic prowess of British portraiture and the MFAH, is targeted at a demographic that would already be intent on visiting. Unless you are an ardent anglophile or a history fanatic interested in sugar-coated narratives, you may consider checking out another one of the museum’s compelling exhibits.

“Tudors to Windsors: British Royal Portraits from Holbein to Warhol” is on view until Jan. 27. The exhibition is open to the public from Tuesday to Sunday, and tickets cost $18 for Tuesday and Wednesday visits and $23 for other days of the week.