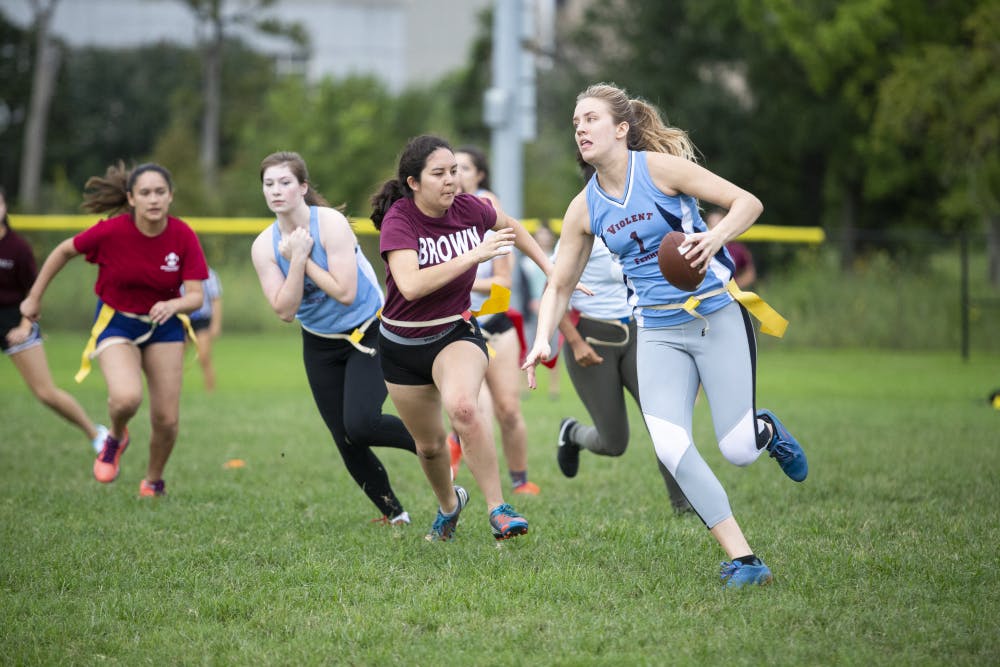 Without a clear favorite established, both teams sought to take control. Martel capitalized early on missed flag-pulls and undisciplined defense from Brown, mixing up run and pass plays to all parts of the field to score a touchdown. After a successful extra-point conversion attempt, Martel’s offense grabbed an early 7-0 lead.

The first half proved to be a back-and-forth affair, with each team playing a conservative, position-battle game. After Brown’s defense earned a scrappy stop with only minutes left in the half, Brown freshman quarterback Maddie Tumbarello connected on a touchdown pass to junior receiver Frances Williamson with seconds left in the half.

An unsuccessful conversion attempt after Williamson’s touchdown reception left the halftime score at 7-6, with Martel leading. At this point, neither team had a clear stronghold on the game, and as a result, the beginning of the second half lacked offensive spontaneity or firepower. With less than five minutes left in the game, it appeared Martel would secure a hard-fought, one-point victory.

When Brown’s final drive stalled to fourth down and 10 inside Martel’s red zone, it appeared as if their efforts would fall just short, stymied by an aggressive Martel defense.

That’s when Brown coach John Brown, a junior, called one of his favorite plays: “Twin Shafts.”

Brown’s play worked to perfection: Tumbarello rolled right, diagnosed the defense and fired the game-winning touchdown pass to freshman receiver Hadley Kruse in the corner of the end zone. Martel’s defense was left stunned as Brown escaped with a narrow six-point victory.

“It seemed like they played pretty well,” Brown said regarding the opposition.

Five other matchups were scheduled to follow Brown vs. Martel: Lovett vs. Wiess, Will Rice vs. Hanszen, Baker vs. Sid, Duncan vs. McMurtry and GSA vs. Jones. Due to heavy, ongoing rain, the last four games were all postponed.

Lovett and Wiess College were able to play out their first half before inclimate weather grinded their 0-0 battle to a halt.

“It’s quite hard to score in the rain,” coach Ashwin Varma, a Lovett senior, said.

Last weekend marked three out of the last four weekends where the Powderpuff coordinators were forced to reschedule nearly an entire slate of games. As of Sunday night, the reschedule for these games is undecided.