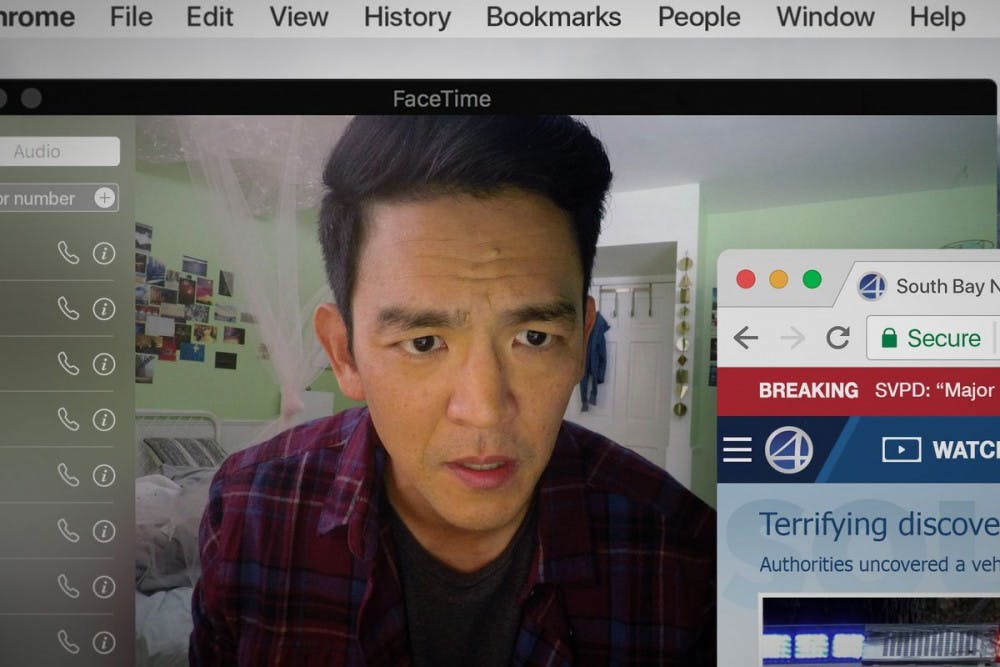 In photographer Allan Sekula’s open letter to Bill Gates, he asks, “When you’re on the net, are you lost, or found?” This question is etched into every scene of Aneesh Chaganty’s new thriller “Searching” with remarkable results. The film follows a widower father who looks for clues about his daughter’s disappearance in her online life and begins to question whether he truly knew her. Told entirely through the lens of smartphone and computer screens, “Searching” effectively captures the terror of a parent discovering their child’s secrets in the Information Age.

The movie owes much of its success to its capable cast. John Cho anchors “Searching” as protagonist David Kim, who spends most of the movie frantically retracing his daughter’s digital footprints. Cho makes David feel authentic and worth rooting for, even when the film questions if his emotionally distant parenting pushed his daughter away. Michelle La skillfully captures the duality of the missing Margot Kim, who closes herself off from the real world but feels comfortable opening up online. Debra Messing commands the audience’s attention as Rosemary Vick, the hardworking detective assigned to Margot’s case who provides an assertive, calm presence to the investigation.

The casting of Cho, an Asian-American, as the movie’s leading man has drawn a great deal of attention online. Viewers looking for a movie that directly addresses issues of ethnicity and identity in the vein of last month’s “Crazy Rich Asians” may walk away disappointed. Still, “Searching” comes off as deliberate and thoughtful in its advancement of equal representation in Hollywood. The Kims are fleshed out as a distinctly Asian-American family. In a film that plays off decidedly modern fears, the message is clear: this is what an American family looks like now.

From its opening montage of Margot’s childhood, told through clips from home videos, “Searching” draws viewers into what is happening on screen. Rather than letting the film’s unique cinematography be a gimmick for gimmickry’s sake, Chaganty allows modern technology to guide his storytelling. For example, Chaganty cleverly shows David’s anxieties in an early scene where we watch David write and rewrite a text message to Margot before finally hitting “send.” The film’s plot moves quickly in large part because David always Googles questions that could be Googled. Once Margot goes missing, Chaganty fully realizes the narrative potential in the visual language of the Internet. Desperation and fear ooze out of claustrophobic shots of David’s cluttered browser tabs. The shrunken profile pictures of Margot’s online acquaintances seem distant, almost alien. Webcam footage of an increasingly haggard David serves as a sobering reminder that all the interconnectivity of the present day cannot save us from feeling alone.

For all of its focus on the influence of technology, “Searching” is a deeply human movie that works off the strength of its characters. Depictions of social media and smartphone culture serve as a lens to explore the fears of parenthood, not the other way around. The beating heart that really drives the film’s story forward is a father’s unconditional love for his daughter.

“Searching” is not perfect. Some viewers may be turned off by the sheer amount of plot in this movie. Stuff just keeps happening, and once the film starts moving, it rarely stops to take a breath. A couple of the film’s many twists stretch the limits of believability. And at times, its computer screen visuals seem lifeless. It’s hard to translate scenes of Cho clicking through Windows folders into arresting imagery.

But even when “Searching” sputters, its creativity shines brightly. At worst, this is a movie with more interesting ideas than it quite knows what do with. And when “Searching” is firing on all cylinders, which is often, it’s one of the best films of the year.