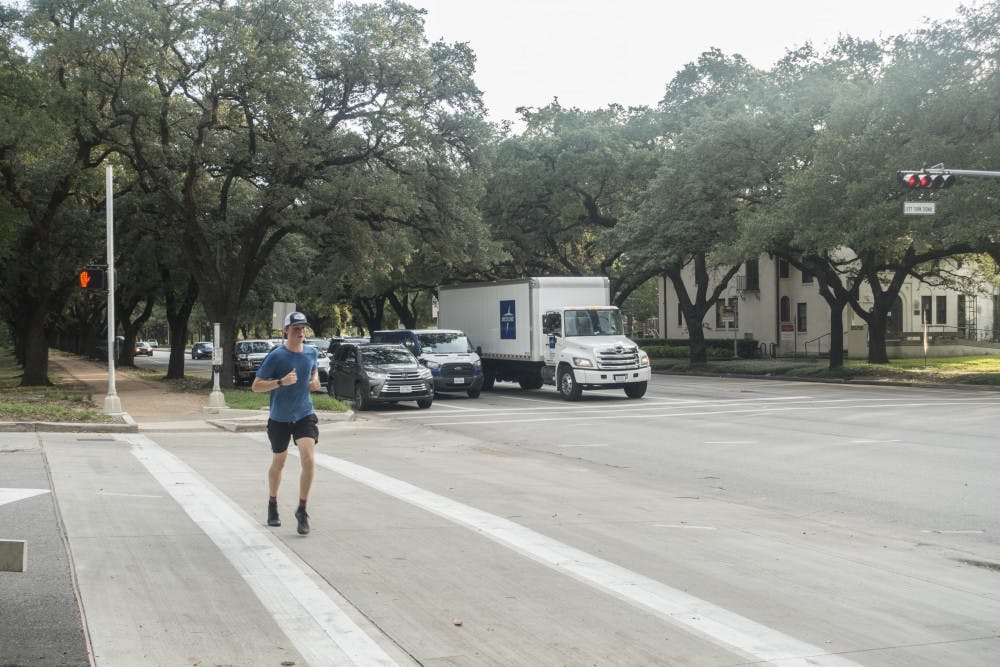 The Rice administration and the City of Houston have agreed upon the building of a roundabout on Sunset Boulevard and are discussing the installation of a stoplight at Entrance 20, located at the intersection of Rice Boulevard and Kent Street.
Entrance 20 is the most heavily used entrance to campus following Entrances 8 and 17, according to Kevin Kirby, vice president for administration. However, unlike Entrances 8 and 17, Entrance 20 lacks a stoplight to facilitate traffic.
“We have been focused very closely on Entrance 20,” Kirby said. “Generally, we find that where there is a stoplight, it’s safer to cross. We have been focused on trying to get a stoplight there from the city. Rice worked to get one at Entrance 8 and Entrance 17, and we’ve been working for a long time to get one at Entrance 20.”
According to Greg Marshall, director of university relations, the stoplight at Entrance 8 was installed in 1993 and the one at Entrance 17 was installed in 2002.
Kirby said the university has worked with the city and METRO to identify hazardous areas and create these changes.
“I would say the city has been great in their response,” Kirby said. “Not just the city of Houston, but also METRO, in helping us to do things about ‘no right turns on red’, bike paths, redoing the intersection at Sunset and Main and a bunch of other things. We are in conversation with them now about [the] stoplight.”
The changes come as a response to two fatal cycling accidents over the past two years, which led to the creation of the Mobility Safety Committee. According to Kirby, the MSC completed a report on the status of transportation on campus which should become available to the public in the next few weeks, detailing the current problems and new changes.
“I think the mobility safety group created an excellent report,” Kirby said. “It was the work of not just 20 people who were on the committee, but input from hundreds and hundreds of people around the campus. We’ve captured a lot. Have we captured all of it? No, but we’ve probably captured about 90 percent of the issues and have a lot of really good suggestions for implementation.”
According to Kirby, the City of Houston already approved a plan to construct a roundabout on Sunset Boulevard. as a measure to slow down and calm traffic.
However, according to Marshall, this plan will take years to implement because it first requires the acquisition of a small piece of land from First Christian Church.
“They are receptive to the idea of selling [some of] their land to enable the creation of the roundabout, but the city has not placed the project on its Capital Improvement Plan, and until that happens, the city will not make a land acquisition offer,” Marshall said.
“I think all parties are in agreement, it’s just a matter of moving forward,” Kirby said. “That’s a longer term issue. For example, working on that intersection at Sunset and Main, that’ll get done in less than a year most likely. That roundabout will take several years to come into.”
The Student Association held a forum at Senate regarding these future changes Monday, Sept. 17 and released a video at the beginning of the fall semester reminding students of cycling rules and etiquette. Kirby said students who want to get involved can join the SA or the MSC. Despite completing their report, the MSC will continue operating and taking suggestions.
“I was very pleased with the response of the students,” Kirby said. “It takes a community to make us safer, and it’s a really big deal on campus. We need people to understand what they need to do to contribute their ideas and to ride their longboards, motorcycles, bicycles and drive in a safe manner on campus.”