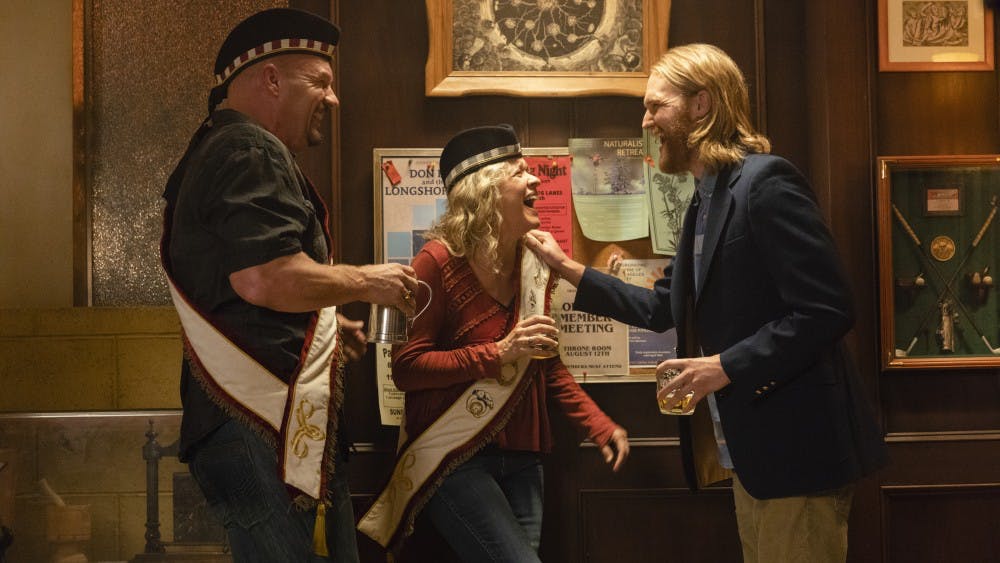 Life can be absolutely absurd. It can also be pretty ordinary. Created by acclaimed short-story writer Jim Gavin, the new TV series “Lodge 49” knows these truths. It fully embraces both ends of the existential spectrum by being simultaneously the craziest and most relaxed show in this critic’s recent memory.

Taking place along the shores of Long Beach, California, the series follows perpetually optimistic ex-surfer Dud (Wyatt Russell). In the wake of a vicious snakebite and the death of his father, Dud stumbles his way into joining a Freemason-esque fraternity called the Order of the Lynx. Shepherded by the order’s “Luminous Knight” Ernie Fontaine (Brent Jennings), Dud enters a strange world that provides a newfound purpose to his lackadaisical life.

The show’s strongest aspect is its relatable, unique cast. Unlike many other shows on television, “Lodge 49” is uninterested in the plights of the rich, beautiful, powerful or even ambitious. Dud, portrayed charismatically by Russell, has moderate financial goals: keeping his classic car and reclaiming his dad’s gold watch and pool repair shop. Ernie, given life by Jennings, is a lonely plumbing supplies salesman hit hard by the Great Recession who finds his greatest fulfillment during his time at the Lynx’s Lodge 49.

Dud’s twin sister Liz (a steely Sonya Cassidy) is self-destructive and dreams of paying off the tremendous debt left to her by her deceased father. Blaise (David Pasquesi) is an eccentric apothecary and failed doctor who finds delight in tending the bar at Lodge 49. These characters have been and continue to be hurt by the world around them, and it is in their average day-to-day struggles that we experience their lives alongside them.

By following these oddball characters, the show likewise exudes a distinctly oddball vibe at an intersection of low-key melodrama and absurd screwball comedy. Pawn shops and secret passages. Plumbing and alchemy. Surfboards and mummies. Some of television’s most commonplace, everyday imagery can be found on this show, but it is mixed in with some of its most confounding.

But in order to get to the wild moments, the show undergoes long-stretches of ordinary conversation and “duller moments. For some viewers, the show’s glacial pacing might be seen as a negative. Having said that, this critic believes that the episodes take as much time as is required to properly develop the context necessary for the unbelievable to become believable. By doing so, the series masterfully blurs the lines between the ordinary and extraordinary in a way more hurried stories never can.

Overall, “Lodge 49” is an utter gem of a production that touches the heart, tickles the funny bone and puzzles the mind, often all at once. If you’re tired of the excess of similar shows on TV and are searching for something new, look no further than “Lodge 49.” There’s nothing else like it on the airwaves, and there probably won’t be again for a long time.

“Lodge 49” airs Mondays on AMC at 9 p.m., and its entire first season is available on AMC Premiere.