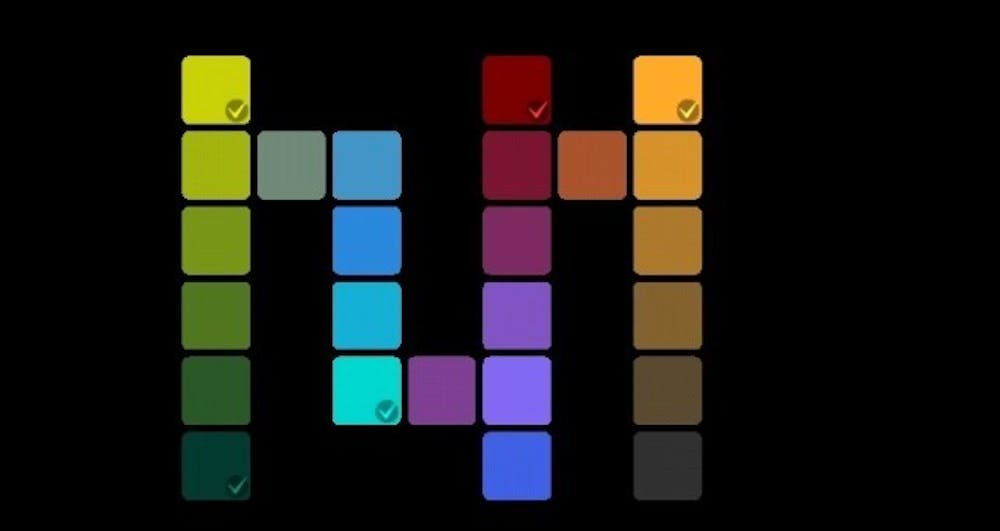 There is something precious about the interim period spent waiting for the campus shuttle or in line at the servery. These are times of idleness, and they feel like an oasis from the rat race of college life.  In these moments, I turn to idle games –  games on my phone that are perfectly situated for these idle times. They are engaging enough that I don’t have to focus too hard, but shallow enough that I am not committing to anything meaningful. After years of culturing and reinforcing this habit, I now consider myself somewhat of a hardcore idle gamer, and will do my part to lend my critical eye for the prospective idle gamer.

An idle game must be shallow and addicting, and Blendoku represents the best of both. In this puzzle app, the player arranges tiles of different colors to match a smooth and continuous gradient. Throughout its whopping 525 levels (with even more available through microtransactions), the level design never attempts to expand beyond the initial game mechanics. What makes Blendoku addicting is its sound design. Every time the player interacts with a color tile, it crunches underneath their finger like footsteps upon freshly fallen snow. As the game’s pace picks up, it creates a soundscape so emotionally satisfying that to pause would be akin to leaving bubble wrap unpopped. As an idle gamer, I am always promoting this game, especially to actual gamers. And so I went around and had people test it out.

Wiess College senior Calvin Su is a fan of Heroes of the Storm and Dishonored. “It kinda just felt pointless,” Su said, referring to Blendoku. Sid Richardson College junior Andrew Low plays XCOM 2 and Mass Effect 2 and said he actually likes the game. He also enjoys playing crossword puzzles, which is essentially what Blendoku is.

Idle gamers may seem easy to please, but we really are not. A few days ago, I tried out Splashing Dots, a game in which I interacted with an object by moving it through a set of landing points. The object must reach its destination without touching previous landing points in its path. The game seems promising, but the visual design kills it. The animation adds nothing but visual clutter to an otherwise simplistic game. The use of color is similarly misguided, as it took me a while to realize that the landing points are randomly colored and have no bearing on the game. However, I was stricken that my test subjects liked Splashing Dots more than Blendoku. They seemed to be impressed by all the things that bothered me.

“The colors are just there to give you some fun,” Low said.

There is one idle game experience that is nearly universal in the modern world. When the campus Wi-Fi breaks, the student body collectively starts playing the dinosaur game on Google Chrome. In this retro-style arcade game, the player is a pixelated dinosaur who must jump over catci and over and under pterodactyls to survive. I love this game and its elaborate visual gag (No Internet connection? That’s like prehistoric times!). I love it so much that sometimes I turn on Airplane Mode just to play it. It is designed to be the perfect idle game, because what can be more idling than waiting for the Internet to come back online?