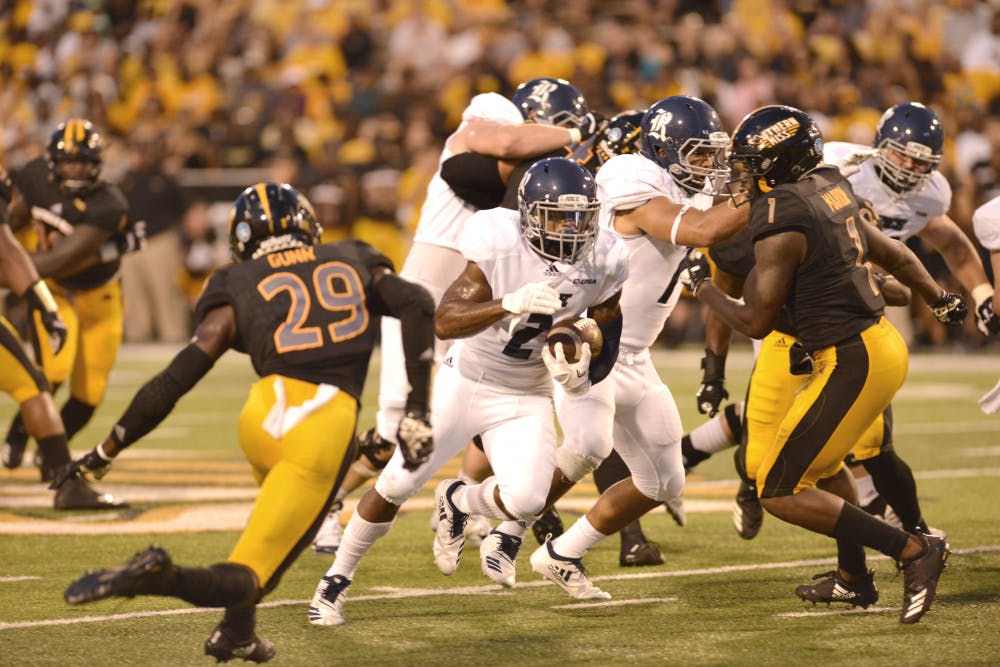 In a scene eerily reminiscent of the 2017 Owls and their anemic offense, the Rice football team gained only 262 total yards in a 40-22 loss to the University of Southern Mississippi on Saturday. The loss dropped Rice’s record to 1-3 for the year and handed the Owls a defeat in their conference opener.

In their last two games, against the University of Hawaii and the University of Houston, the Owls’ offense had put up 446 and 439 yards, respectively. But against the Golden Eagles, they were almost 50 percent less effective. Rice head coach Mike Bloomgren said both ball security and quarterback protection were issues for Rice.

“Offensively, it comes down to protecting the ball and protecting the passer,” Bloomgren said. “We struggled to do both, and we didn’t give our skill guys a chance to make plays down the field today. We didn’t strain through blocks, we didn’t create the holes that we need to create and what we talk about in this offense is intellectual mentality and imposing our will. We simply didn’t do that tonight.”

The game was initially close, with the Golden Eagles leading 17-15 with 7:24 left in the second quarter. However, later in the quarter, Southern Miss defensive back Rachuan Mitchell intercepted Rice quarterback Shawn Stankavage, a graduate transfer, returning the pick 45 yards to the Owls’ 1-yard line and setting up a 23-0 run for Southern Miss.

“As a defense, anytime they put up 40 points, it leaves a bad taste in your mouth,” Robert said. “The biggest thing is we’ve got to come out and tackle better, keep things in front us, [and] do the fundamentals. Again, there’s times we play real well and coaches talk about consistency, but that’s just something we weren’t able to do tonight.”

Rice’s pass defense was a particular trouble spot in the loss, as the Golden Eagles recorded 428 passing yards, surpassing the Owls’ total yardage for the game. Robert said the Owls’ struggle to adapt to Southern Miss’ varied offensive attack was a major factor in the loss.

“We knew they would throw multiple looks at us,” Robert said. “That’s what their offense is and hats off to them. They did a good job, but at the end of the day, we hurt ourselves there. They got a whole bunch of their passing yards in the screen game and quick stuff and we’ve got to come down and make those tackles. They had a couple deep balls and we’ve got to play over the top to keep everything in front of us. Again, hats off to them, but we didn’t play our best football.”

Though the Owls lost, senior running back Austin Walter had 204 all-purpose yards, moving him to sixth all-time in Rice history with 3,294 all-purpose yards. Walter recorded 81 yards on six rushing attempts, 115 yards on four kickoff returns and 8 yards on a single reception. But his performance was not enough to propel Rice to a victory.

The Owls have now lost their last three football games, and sit at the bottom of the Conference USA West division standings. Rice’s next game is at Wake Forest University on Saturday, Sept. 29, as the Owls wrap up a stretch of three straight road games.